I signed up for this event very late. I saw a flyer in a previous event and decided very late to sign up for it. After coming out running great half marathons and a full I decided to add one more half for fun, specially since this event was on Thanksgiving Day. Who in the right mind think that running a half marathon for fun is a good thing? ME! INSANERUNNING ME!

I woke up early that morning, since this race was in the other side of town. I drive a F150 with a side door to access the back seats, I think they call them suicide doors. It was a very cold morning 34 degrees and dropping. (29 by the time of the start of the event) After loading the truck with my bag, towel and some other junk to have just in case and as usual when you are already nervous and a person needs some excitement in the hours of the morning, the main door will not close.

After many attempts I could not figure out why. The locking mechanism looks ok, but hey it was so early in the morning who know or what I was thinking or looking at. So, I did the very best thing, I started driving holding the steering wheel with one hand and the door with the other. I drove the next 30 minutes trying to not freeze because there was no seal of the door and the cold air was creeping in. After I arrive, fiddle with it for 2 minutes and it finally it close.

The event meeting area was inside the High School, at the Cafeteria area, a nice clean warm place. Lots of runners and their family ready to run and ready for a nice Thanksgiving. The event started in time, cold and sunny. The route was through few neighborhoods and a main two wide streets. Very nice route. I met another runner that saw my yellow Disney Half running shirt. He also ran in previous years the Disney events and we were able to chat for a while. I ran by effort, pushing it sometimes and sometimes slowing a little bit since it was very hilly. 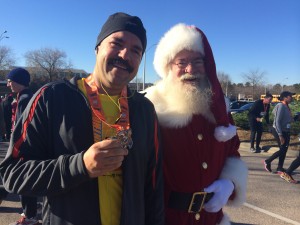 I was able to finish with a 2:03:55. I could not break the 2 hour goal for a half that I have been trying lately. Close but no prize. It was a great event, the water stations were ok, with some of them being a little bit under staff. At the turnaround they had the High School band playing, that was a very nice touch. Even Santa was there at the end of the event, receiving the small kids and big kids too. Tons of running fun, now ready to eat some Thanksgiving dinner this evening.

Course: Street course with lots of small hills, one turnaround, couple roundabouts and a large loop around. The hills are not necessary challenging hills, but they are many of them. Mostly neighborhood scenery with a section near pretty nice houses.