This was the last 2014 Spring Triple Crown event and once again the infamous Lassiter Mill hill was on the menu. That morning same race/event ritual that has work for me in the past. Got up, this time a little bit earlier, changed into my running gear, oatmeal, a latte, checked sugars (well within running range) and one last visit to the bathroom and off out the door to get to the event. Different for the last time, there were no accidents that delayed me for getting into the event area in time. Got there with plenty of time to kill and waited in the car for a while.

I walked to the starting area to wait for my friend Roland. There I talked to one of the runners that we have seen at the Tobacco Trail several times during the training runs. We chatted for a while about events, races, pacing and other stuff. Roland showed up and we discussed our plan of attack. We knew the course pretty well, since we have done this event couple times already. Again the main goals were to finish strong and beat the “Nemesis” (We need a good goal to achieve in every event) and to beat the Lassiter Mill hill. I looked around for my other friend that was supposed to also be doing the Triple Crown challenge and could not find him, wonder if he got hurt or if he could not make it to the final event.

We set out to start way back in the pack, with the idea, that from the beginning to start passing people slowly but steady. The event started and after a few announcements, off we went. We started going down hill (Infamous Lasseter Mill Hill) going at easy solid pace but still passing a few runners. We concentrated in holding that easy pace since it was down hill and we did not want it to go too crazy too early, wasting too much energy so early in the event. As we moved into the neighborhood to the right a few ups and down, but holding strong, good pace. We knew that after the first 1.5 miles through the neighborhood it was going to be mostly flat. Once there we held a good decent pace. Under 10:30 pace, very comfortable, as we got close to the the 1st turn around and saw the “Nemesis”, we decided to hand close but not to pass at this point. We reached the first of two turn a rounds and we knew he was following the Galloway running method. So a walk/slow jog session was coming soon for him and a that time we were going to held steady our running pace.

And sure enough, he did and we went for it and passed him, we put a little bit more effort to continue strong and held steady strong for about a period long enough to cover his running portion and a another walk. Also, chip time wise I knew that we were at least a minute ahead, since we started way back in the main corral.

We continued and close to mile 8 we sprinkled some slow jog for couple minutes and we continue back to running, holding good pace. Coming back we encountered the same neighborhood area, ups and downs taking just a little bit more of effort this time. Mile 9 we walked a little bit, same with mile 10, I know the “Nemesis” was behind us but not necessary far enough. After 10.5 mile marker was again very flat until the last half mile to the finish. Decision time came, do we press now on the flat and suffer during the up hill of the last .5 to the finish to keep the “Nemesis” in check or should we slow down so we can tackle the hill? So we started to press just a little taking still the hill in consideration. At Mile 11.5 mark there was the second turn around and unfortunately not far behind enough the “Nemesis” was there. We knew we needed to held the pace steady with the hopes to stay ahead of the “Nemesis”.

We continue, but temperature was warmer now and we started to suffer a little bit. Roland was giving all he got to stay ahead and I had just a little bit more left in the tank at this time. At mile 12.5 it was the start of the infamous Lasseter Hill. I got excited about and started to feel strong and I want it to conquer the hill this time. I made a deal with Roland. There was a runner with a bright orange shirt ahead of us, already running the first meters of the hill and was looking good and holding steady. I told Roland to concentrate on that runner and keep, slowly, closing in. He agreed and off we went up the hill. Unfortunately the Orange Shirt Runner slowed down and started to walk too early for us to make a dent into the hill. Roland slowed down, while I encouraged him to keep going. He told me to go ahead keep going, I warned him that the “Nemesis” was not far behind us, that he needed to push and find strength from way deep to finish before him. He agreed and off I went. I increased my cadence and shortened my stride a bit. Super confident, I passed walkers and other runners that were having trouble with the hill. I pressed on and at the crest I sped up, lengthen the stride and finished super strong. I was really happy. I finally conquered the hill and had enough gas in the tank to conquer it again.

Roland walked a little bit during the mid portions of the hill, but found the strength to jog and run the last part and finished strong and well ahead of the “Nemesis”. It was a great event. I had tons of fun. No PR this time but more important, one milestone hill conquered, that is always a plus.

Course:  Street and Greenway path course. Famous start downhill, some hills during the 1st 2 miles with the mid portions of the half mostly flat. Very nice paved trail, wide enough. There are couple wooden bridges that are some what narrow for a race traffic that could cause some choke points. One last up-hill, the famous Lasseter Hill.

Venue: Some vendors, booths, music, plenty of water and food.

T1D: Sugars with in running range at start. CGMS was not providing accurate reading compare to body cues.

Fueling: Pre-Race: 1 serving Hot Cereal and Latte. One Banana one hour before start of race

Race: Water at the water station. Gel every 40 minutes 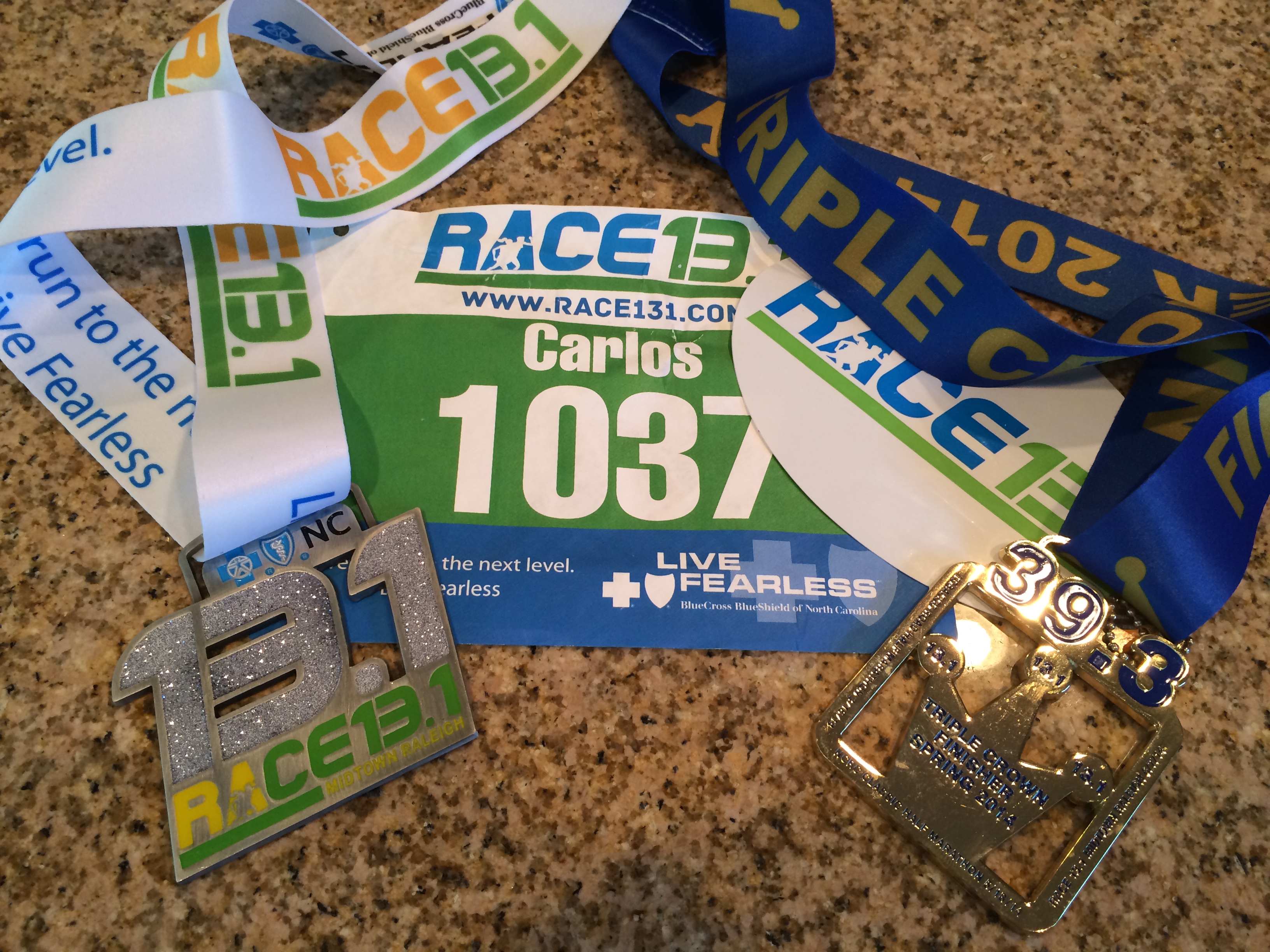