Back in early June I had a business trip scheduled to visit one of our offices in Utah. I searched for running events during that weekend near the Salt Lake City area to try to run a distance of a half marathon that weekend and opportunistically cover one more state off my 50 states list this year. To my surprise there was one on a Thursday, Utah’s Pioneer Day, The Deseret News Marathon, which worked perfect for me since my business meetings were done on Wednesday night. I could just run in the morning of Thursday, hop on a plane by noon and back home that night.

“First run in 1970, the Deseret News Marathon is the oldest road race in Utah and the 4th oldest marathon west of the continental divide. The marathon follows the path the Utah pioneers traveled when they first entered the valley. This event is truly a part of Utah’s heritage!”

Now there were a few new things and  challenges:

But other than that, this was a great opportunity to cross another state of the list. One thing it became aware regarding the rating and comments for this event was that water stations although frequent might not have enough water to go around for all runners, specially later in the event. Some say that more water stations were needed and others encourage people to bring their own water since the dry and hot conditions makes it for a challenging hot event.

Since this was a business trip, I got the opportunity to travel there early, on a Monday, ready for long meetings for the next three days. Which it was good so I can get use to the time and the weather. Although the temperature was in the 70s in early mornings, it feels so much cooler than that due to the low humidity. That was good news for me. Although being so dry was something I have not got used to when running. I was trying to spend as much time outside to get use to the dry weather and figure out how the altitude will impact performance during the marathon.

I had to really watch out for what I was eating at lunch and dinner, since we were going out for team activities and the menu was so different from my usual running event week. Fortunately I was able to control the breakfast and I was ready with extra fuel, snack stuff just in case. On Tuesday, I did an easy 3 miler at the hotel’s gym. Just enough to break some sweat and get my legs moving. Dinner before the race was a simple sandwich and some chips with water.

Thursday, race day early morning, went down to the lobby to prepare oatmeal and coffee. Got ready and the usual bathroom visit before driving to the location where the transportation buses to take runners to the starting line were ready and available. Got there with plenty of time. I jumped into one of the buses ans sat next to another runner that was from Belgium. We chatted for a while as he has done few marathons in different countries and was on vacation with his family. He was taking the opportunity to run few events in the United States. 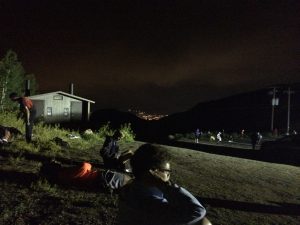 The drive to the starting line took about 35 minutes, going up hill in a narrow road, so dark and so different than any other events I have ever done. We arrived at the starting area and there were a large tent located in a dirt landing area, very dark and a view to the valley. The lights of Salt Lake City very far away, where the finish line was supposed to be located. I walked for a while and found a place to sit down outside the tent area. The 4 buses emptied out and drove down to pick another round of runners. There were about 300 runners for this marathon and about 13 miles downhill another set of runners participating in the Half Marathon event.

Sitting there and looking around at other runners, I realized the great shape that most of the individuals running the event were in. Very skinny legs, thin frame, looked like they have been running for years. Most of them wearing running technical leggings, shorts and shirts. At that time it came to me that although not necessary in that great of shape compare to them, I was still part of the group. A group of serious runners, marathoners, running friends and peers, even tho they did not know my name and I did not know theirs either.

The wind picked up suddenly really bad, lifting sand, dirt, twigs and debris up. Most people walked and made their way into the large tent. Inside it got crowded, but the runners were doing their final preparation for the start of the race. Some stretching, some eating either banana, bagel, gel and other things. Some putting band aids to prevent chafing, others applying glide or Vaseline. By this time the wind calmed down to a breeze and the race was about to start. I dropped my drop bag and resume to placed myself near of runners that looked that were somewhat in my age group or older and others about or near my current shape.

After a few announcements, the countdown and off we went, rolling down hill. The race started so unbelievable fast. The first four miles average running well under 9:00 minute/miles, which was way too fast for me. The dry, cool breeze felt good, but somewhere between mile 3 and 4 I realized that I should not continue a pace like that. At that time I was running next to the 4:00 hour pacer and even tho I was running steady and somewhat at controlled pace, they were just chatting and talking in full sentences and I was not. I knew I was not going to be able to held the pace, and sustain as soon as it leveled off. Specially at the upcoming and only decent uphill. I slowed down, keep reminding myself that I just need to finish the distance, I do not want a repeat of the Rock and Roll. That was the main goal for this occasion. 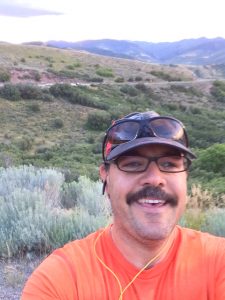 I did slow down, half way to the downhill miler there was the half mile uphill. Since I started fast, too fast, the hill force me to walk for a while. During the walk I met a guy that have been running marathons for many, many years. A judge from Kansas, completed the 50 states challenges long time ago. He love running and it showed. We talk for a few miles, I match his steady pace. It was great to have that break, cause it took my mind off the race and that I had to walk that last portion of the uphill. Closer to the last part of the downhill and feeling much much better, we started to pick up the pace just a little bit more.

With no clouds in  the skies, the sun came out and started pounding. One thing I realized at this point is that I have been drinking water at each water station and that I was also running short in water/energy mix on my bottles, I was carrying two of them. This was just an indication of the dry conditions, loosing water fast, even tho I was feeling dry.  So, I stopped in one of the water stations and refilled the water bottles. It was very warm water, but still, I knew I needed to keep drinking once in a while. During the rest of the last 10 miles, few rolling hills, mostly downs. Not many runners near by, a few ahead of me and few more behind but with enough distance in between that it is hard to determine who is who. For a little while there was a couple running near by that every time the passed a mile they scream a big “hurray”. It was fun to watch, the 1st time I heard them I thought something happened to them way behind, second time I realized they were celebrating each mile.

I slowed down a bit more and added a walk at each mile maker. Even tho my legs were feeling fine, for some reason I knew it was to finish marathon and I want it to enjoy the run this time. I think at mile 18 they were giving LG gel, a new brand for me. Since I was having so much fun I grabbed two of them and decided to give that brand a try. And actually liked them a lot, lemon flavor with caffeine, so I got another surge of energy about 15-20 minutes later.

Close to mile 21 there was some spectators getting ready to move along, they had a cooler with them. I asked them if they had some ice left, they say yes and shared the ice with me for one of the water bottle. Finally!, some cold water, the sun still pounding, dry and getting hot. A mile or so later, the ice melted and the water was back to the warm water. It was good while it lasted. At mile marker 25 I stopped to take a picture and send it out to my family. This was the point in which I started to have problems during the Raleigh Rock and Roll. But this time I was feeling great.

Earlier I mentioned that the marathon happens to always be during Pioneer Day in Salt Lake City. So one of the feature of the event’s route was that for about three city blocks, the route diverts into the Pioneer Day Parade. Yes, as part of the parade, with floats, marching bands and other cool stuff happening next to the runners and the large audience. I have to say that it was AWESOME to run along that route, with a larger crowd along the sidelines cheering and clapping as the runners, floats, marching bands were passing by. To be honest I do not think they were necessary cheering much for the runners but I would like to think that that was exactly what they were doing. 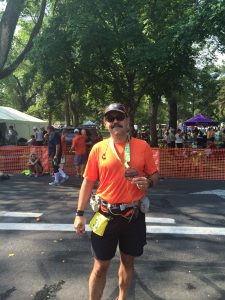 The last stretch of the Marathon was totally flat, lost of people at the finish line near a public park. It was a great feeling to finish with still plenty of energy on the tank. No PR, but that was not the plan. 5:08 not bad, definitely an hour plus ahead of my previous disaster. Very happy to say I was back in the running.

Course: Great ample road right of the start, mostly of downhill. One hill around mile 7, followed by rolling down-hills all the way to the finish.

Expo: Small but nice expo at a near by hotel.

T1D: Sugars at higher edge of running range at start. Trending up during event and holding later on the high side of the running range.

Race: Water at the water stations. A Gel every 4 to 5 miles. Carried energy drink with me.