The Disneyland Half Marathon is a great event, specially for people doing their 1st half. The course is very flat, some rolling hills here and there but nothing too challenging. Plus with all the distraction from the different characters picture locations, school bands, school shows, theme parks, baseball stadium and other very nice features, once again, you forget that you are in a race.

Morning started as the previous day with the 10K, breakfast, quick pit stop and got on the bus to reach the dropping zone to start the less than half mile or so towards the starting line. At the starting line, similar to the 10K, great show, music, well organized. And after a short waiting, off we went. The route have us running thru the park at the early stage of the event. Almost identical to the 10K for the 1st 4 miles, then turning toward city roads heading toward the Speedway and the Angels baseball stadium. 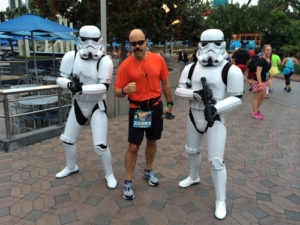 The roads are very wide, not much of incline with the exception of the couple bridge over the freeways. Water station are well stocked and plenty of medical stations a long the way. Since similar to the event earlier in the year at Disney World, the goal was to finish for the bling and not for PRs, we took our time and made few stops here and there for picture opportunities. We walked most of the water stations. The temperature was on the warm and humid side but nothing that bad or horrendous. It was a little bit overcast which was great since we did not had the sun pounding and making it difficult to enjoy.

We slowed down after 9 miles and just started to admire all the costumes and people on the side cheering for the runners. Tons of people with Start Wars theme, it was funny and awesome to see Stormtroopers and Dark Vader on the side of the road waving and encouraging runners. I guess a lack of running performance will cause him to give you the choke of death instantly.

Once again at the end of the event finish line was great, Mickey and Minnie waiting for the runners there. A little bit of walking to get the Dumbo and the Coast o Coast medals. Little more ahead some more drinking water, energy drinks and the Disney traditional snack box with crackers, cheese, rice snacks, chips along side with a banana. 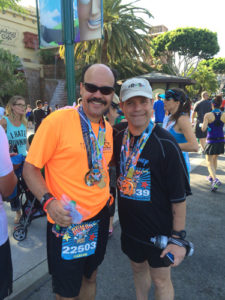 We keep walking and saw Sean Astin from Lord of the Rings/Goonies talking to few people with the finishers medal. We decided to stop and have our picture taken with him. Not everyday you get opportunity to run in the same event and be able to take a picture. We quickly started the walk back to the buses area. That was proven to be a little bit more painful since we had to cross the area were runners were finishing the race, so it took us a little while to make our way back to the hotel to get ready to get the plane back home. Great time during this event. Challenge completed!

But wait, nothing better that a great Churro to celebrate the accomplishment!!! Yum, yum! 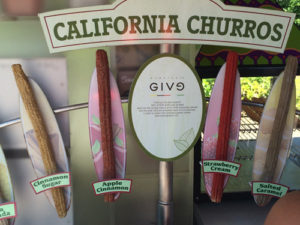 Course: 1st 5 miles similar to the 10k, great ample road right of the start and for the entire course. Mostly flat with water stations well manned and plenty. A short portion was one gravel, about 1/4 of a mile. Great shows along the way.

Venue: At finish, snack box, water and lots of music.

T1D: Sugars within running range. Remained ok during the event.

Pre-Race: 1 serving Hot Cereal and Latte. Gel an hour prior the start.

Race: Water at the water stations.

Post: Water, banana and chips from the snack box.