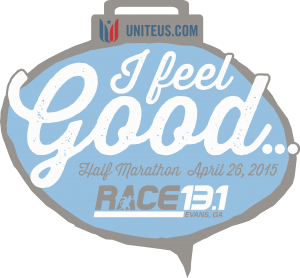 This event was part of the 13.1 half marathon series. The season pass will allow you to run all Race 13.1 17 events. I figured out, that running 4 events is a break even for the 200 cost. Since every year for the past three years I have been running two of the Race 13.1 events, and since some of the events were out of state, I decided to sign up for the season pass and take advantage. This one in Georgia. I got to check out another state in the quest for the 50 states goal. My family came with me, we drove down GA after daughter’s swimming practice. We stopped at Jack in the Box in Charlotte, halfway there. I know, I know it was not the best food for the day before a race, but this race was not necessary an event to PR. The course looked like 5.5 miles downhill, followed by a mile of flat land along the Savannah River. And to end the next 6 miles uphill, since this was an in and out half marathon with a single turnaround.

The temperature was good at the beginning of the event, but I knew it was not going to last since the forecast called for higher temperature later in the day. There were enough clouds to offer coverage and it seems that the sun was not going to be a problem. I had the usual pre-race breakfast but I held once again the banana to eat about 1 hour before the start of the event. I got to the event area with plenty of time. Checked my sugars and they were good, on the high side of my running range but still within the running range. I ate the banana, did a bolus adjustment, drank some water and waited for a little bit before walking to the area.

With about 25 minutes to the start, I did some warm-up jog, with some speed segments to loose the legs muscles and stretch the muscles. I started sweating quickly, but there was a small breeze that felt really good. I ended up doing about 2 miles of warm up, definitely more than I used to do, but I was feeling great. While I was waiting for the start at the corrals I was still sweating but all was good. Since my goal was to finish under 2hrs, as I was not officially attempting to shoot for a PR, I want it to start behind most of the runners.

At the start, I move quickly from the back of the group of runners to close to the middle group. Since the 1st portion of the event was downhill it felt easier than expected, still very humid but the sun was on and off. The portion of the run downhill that was on a paved sidewalk and it just was ok. There were a few spots that were a little humid and a bit slippery. I could feel my foot slip on the push off a few times. Still, I continued the journey downhill, trying to be somewhat fast but conservative. 1st 6 miles I was brushing with 8:10 minutes mile pace, with mile 5 having one very steep downhill for about .25 of a mile, then flat to the turnaround. Around mile 4-5, I kind of thought I was going to be able to PR in this race and decided that since I was going fast at the turn around I was going to give it a try. All was well, at the turn around still feeling great, I slowed down a bit to tackle the steep uphill, but still, it was too much for me to sustain a decent pace. I walked about 1/4 of the hill to the water station. Grabbed some water, continue to walk for a little bit realizing that the dream of PRing in this event was not going to be possible. It was ok, that was not the original plan. I began jogging once again but this time at a slower pace.

Next 6 miles are basically a gradual uphill, the sun was out and it was getting warmer. As the few miles pass, I walk a little bit more here and there. I stayed with the same runners around me for the rest of the event. I talked briefly with one of them and finished in decent shape. Under two hours since that was my primary goal. My sugars held pretty well throughout the race. I stick to the two energy gels, although probably would not mind having the extra water especially closer to the end of the event. Another State crossed from my list.

Course: Great ample road right of the start, then to the sidewalk. 1ts portion is down hill and guess coming back up up uphill.

Race: Water at the water station. Carried E-Fuel and E-Gels.