First off, Happy Thanksgiving, I hope is a good one. For the last three years I have been running the Skinny Turkey Half Marathon. Maybe to burn the calories before the festive dinner with the family or maybe because the first time I ran this event it was so much fun that I have been repeating every year.

The plan was to go in a have some fun with the event. Coming form a PR in the full marathon about 24 days ago I was not necessary planning to go at it. (Well that was my background voice always telling me, just run it. While the other one was telling me go at it and see what happens.)

That weekend I end up running a 16 miler at the American Tobacco Trail. That Sunday I met with the RTR (Raleigh Trail Runners club) group to join them at Umstead Park for what was originally to be a 10 miler easy run. As it happens one of my Strava friends was there. Although he has run at Umstead before, he had never ran on the Turkey Trail segment before. So I told him that if he slows down a bit, we could run all the way to the turn into the Turkey Trail which it was about 5 miles in. After a fast but comfortable pace we got to the water fountain for a quick stop. There we decided to continue a do the Turkey Trail loop, knowing that it will add addition miles on a hill trail course. We ended up doing 14 fast miles on hilly trails. But I was happy with the run.

I skipped Monday run due to swimming meet, but completed fast 6 and 7 milers Tuesday at the gym and Wednesday at American Tobacco Trail. So that night prior to the event I was a little bit tired. Fortunately I had good night sleep that last three nights prior to the event.

For dinner the night before, one serving of pasta with red sauce and a late snack of some delicious cinnamon twists that my wife prepared for me. In the morning the usual latte with hot cereal and a banana to eat just 45 to 60 minutes before the event. Drove to the event location at a High School in Wake Forrest. Which as per last years it was an excellent location to have a race, plenty of bathrooms and areas to stretch, sit down and relax. After a quick stop at  the bathrooms and debating to whether or not warm up, I went ahead a did a 1 miler warm up. Leg felt tired but I was glad I did the run to shake them off. At the starting line I met Rob, a friend of mine that have done Ironman’s and several races which provided early advice when I started running event when we worked together. It was very nice to talk to him as he is also going to be running the a same event in December that I signed up for.

A few announcements, the National Anthem and off we went. Everything was going “ok” at 1st, legs still tired but holding on. I ran with my heart rate monitor since I was not planning to push much in this event. But after couple miles I notice that I was ahead on pace and feeling good. I skipped the 1st water station and grabbed some Gatorade at the second one. Mile 3 and 4 passed by fast. I saw in the distance a pacer and since I started with the 2 hour pacer I assumed it was the 1:45 pacer group so I pressed a little bit to see if i could catch them. Around mile 5 the 10k runners joined us and for a while it look like a lot of people running fast. But what you do not know is who is doing what race. That turned out to be good and bad, because I push the pace to keep with the runners and after the 10k turned toward the finish line, you realize that there were not many half marathoner running with you after that.

The course is very hilly, so there was a constant change of pace. I kept pursuing the pacer, until I finally caught up with him. To my surprise it was not the 1:45 pacer, but the 1:50 pacer. At that time I was like, “oh man!” I quickly check my pace and I was somewhat on target to be close to my previous best. I continued realizing that I was very strong during the uphills maintaining the pace with short quick steps and not too fast during the downhills. Or maybe other runners will slow down during the uphills and then accelerate downhill.

Getting close to the turnaround at mile 9 I saw the 1:40 pacer past by followed by my friend Rob just a few minutes ahead of me which provided words of encouragement. After the turnaround I started to press once again with a slightly long downgrade slope. I concentrated on my breathing and quick cadence specially during the uphills. By mile ten I realized that if I pressed the pace just a little bit more there was a possibility for a PR. “A better time than 1:47:17 will be nice” I thought. I started to give it a go once again increasing the stride just a bit. Some pain and discomfort but I kept running. Close to mile 13, I was feeling depleted and really want it to slow down, but I started to talk back to my brain with a forceful “NO, .2 to go and you are not going to stop or slow down, after that do whatever, but only until then.” 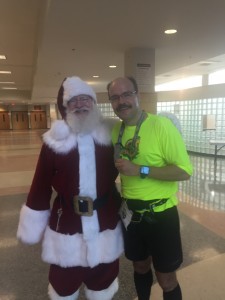 Finishing exhausted, grabbed the bling and water, thanking the volunteers for their excellent support. I walked a little bit, not enough energy to do a warm down. Did couple stretches and that was it.  I looked for Santa for the traditional picture at the end of the half and quickly left to get home to start Thanksgiving dinner preparations. I crossed the finish line with an official time of 1:46:23. Yipeeee!! Later to realize that my previous PR was 1:49:17 not 1:47:17. So about a three minute improvement with tired legs. Not bad!!

Course: Great ample road right of the start but very hilly. About 350 runners no problem starting and finding a comfortable pace without too much of zig-zag. Tons of ups and down segments. This year water station setup were spaced and staffed better.

Post: Protein Shake with in an hour of the event. Normal lunch after.