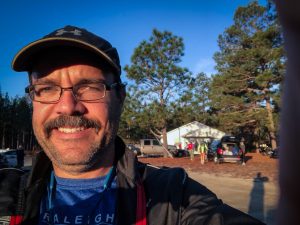 Alright, let me start with a statement:

I have to admit that running past the 26.2 miles of a marathon is crazy business.

But hey, we are all a little bit insane, some more than others. And there is me, insane running all the way.

I knew that running my 1st 50k was going to be challenging. I have done 44 miles run, couple years ago to celebrate my birthday month so I knew I can do the distance. Prep the night before for what I was going to use. Get couple bottles ready with E-fuel, have gels ready in my hydration belt, extra banana, couple snack bars to pick from (Cliff bar, Kind and others) and my protein shake for post-event.  I am so glad I took it easy during the Skinny Turkey, the morning of the event just couple days after Thanksgiving, my legs felt great. The morning routine, as usual, hot cereal, latte and a banana to eat about 45 to 1hr before the start.

This race is very low key, about 80 runners not too much fanfare. I love it, very humble, down to earth event. Community Center at the start/finish line provided shelter from the cold and nice bathrooms. Even though it was my first Ultra, my bib said so, everyone made me feel like I was part of the community. 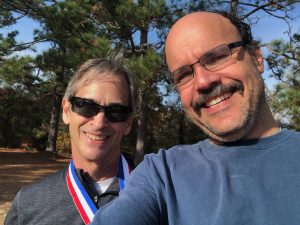 Runners, volunteers, spectators and others that were there to support in one way or another. My friend Walt, an insane Ultra Marathoner from work, was there and got the chance to talk before the event a bit. Similar Laurie, another runner I met via Strava. She has done several and when I mean several, she is a crazy as Walt. Laurie and her friend provided helpful last minute advice. I was ready and to be honest different from Chicago and City of Oaks marathons, I was not nervous this time. It was a beautiful morning with great temperatures and great farm fields around us. After some announcements, we all head out to complete the 3 loops to complete the 50k (31 miles) event.

Loop 1: The warm up, that is what I called this loop, way before we started. My plan was to use this 1st loop as a warm-up, the second one to press the pace and the third one as a warm down. It was cold morning so I started with my jacket, a long sleeve shirt, gloves and a hat. During the first couple miles, I hang back and keep pace with Walt. When we encounter the 1st hill we walked a bit of it, similar to the second one and third hills. These were small hills, but I am glad I did that, that early in the event. It took the pressure off the running and made it ok to take it easy, hitting a 10:00 pace for the 1st half of the loop. I was feeling great, the jacket came off around mile 2 and the gloves came off about mile 6.  There was a water station at mile 4 and another one close to mile 7 ( I was not expecting them, so it was great to have those there) At this time the runners are already spread out, but still, you can see a few runners in the distance, providing a target to pursue. When I finished the 1st loop, it felt great. I quickly change the hydration bottle, drank some Powerzero and grabbed a Cliff bar to eat on the way. Sugars were holding awesome, legs were great.

Loop 2: I grabbed my phone and texted my wife, daughter, Luis, and Roland that I completed loop number one. It was so great to get their text response cheering me up and offering their support. I pressed the pace a bit as I was eating the Cliff bar and continue to sip the E-fuel water mix I was carrying every mile or so. I paid more attention to the surroundings and the farmland. The smells of manure (I know, it should not be something you want to smell during your runs, but it reminded me from the times of my childhood back in Puerto Rico where I lived near a milk farm.), the cold breeze and the silence. During each loop you will pass, fields, farmland, RV park, rural airport and in addition to the nature farmland you will get to see some solar farms as well, which provided plenty to keep your mind away from the distance. I believe I did not start my music until mile 15 or 16, maybe because I did not really need it, I was enjoying the moment. But the music was welcoming, it took off my mind of the little pain and stiffness that I was perhaps creating mentally. Sugars were doing great, I did a bolus adjustment for the Cliffbar and the E-fuel I was drinking, but not the full amount, about 25% of the normal dose. I finished the second loop and I took a bit of more time, drank more Powerzero, replenish my bottle with more liquids, walked to the finish area, talked for a few seconds and I head out for my last loop. I believe I average close to 9:28 per mile this loop. 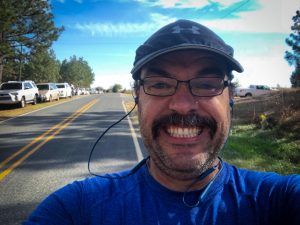 Loop 3: My cool down loop. I texted once again that Loop 2 was done and just one more loop to go. I was so surprised at how well I was feeling, by the way, that is me in the picture just leaving the water/aid station after completing loop 2, I was so happy. But about a mile and a half later in my brain started to play games with me as I remembered that I already covered more than 20 miles to how bad should I be feeling at this time and not how good I was actually feeling. I forced myself to think about just loops. “Two loops down, and only one more to go, it is going to be easy” I kept telling myself for the next couple files. I knew that if I started to think about the distance, I was going to start feeling it. Instead, I just concentrated my mind about the loops and trying to remember what was coming up next. “I remember that mailbox.”, “Ahhh, I know that smell”, “Next there is going to be the pothole”, “Next is going to be the airport”, “Soon there is the water station, let me see if I can run until the water station”. The game was mental at this time. Legs were great, sugars great but tad low, so I took a gel. There is lots of walking, but I was very happy to say, that when I want it to start running, I was able to get my legs moving without a problem. Very different from Chicago and City of Oaks. There was more walking during this final loop, but it was ok. I was able to talk to few runners, especially the ones we were passing each other constantly. With about 4 miles to go, my watch buzzed, a text from Roland. Telling me I was doing great and that I only had 3-5 miles to go. He was right, less than 4 miles, I cracked a smile and pressed on a bit the last 3 miles, less walking and if walking it had to be fast walking. I finished strong, happy and with a huge smile. I completed my 1st Ultra. 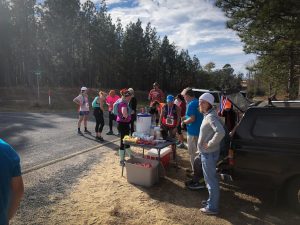 At the finish line, there was a very warm welcome. Everyone was cheering the runners and having a great time. I got the beautiful medal, talked with a few runners that finished ahead of me, the race coordinator and other volunteers. I was great to talk to them about the event and to see how happy they were for each one of the participants. After that, I went to try out some of the spaghetti with meat sauce they were offering to the runners. They were serving plenty, but I told them to just serve me a little since I was not sure how I was going to react. I do not know if it was the miles or how tire I was, but it was one of the best post-race food I have ever had. 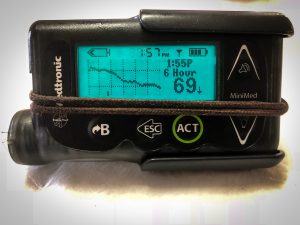 While eating I checked my CGMS again and I was so surprised to see how well my sugars behaved during the whole event. From starting close to 200, holding steady for a little while and a drop to 90s. Holding there for a bit again and then dropping slightly close to the 80 mark. They were just getting a tad low at the end and after the event. I do not know if this was a 40 miler or 50 miler event, if just eating again was going to be sufficient to sustain the levels or maybe I will need to adjust the basals a bit. Something to consider I guess. 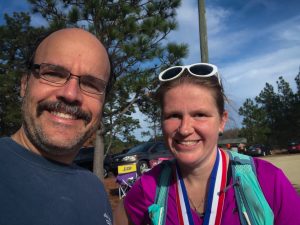 I talked to Walt and Laurie for a bit and thank them for the helpful advice. They asked me if I was ok and whether or not this long distance running was something for me, I responded with a solid “Yes, I loved this event and loved the distance.” Now looking forward to a decent recovery and then to focus on getting some speed back.

Course: Looped 3x coure with great ample road right of the start. Rolling hills, not challenging until last loop hill might look steeper than the begining loops. Around 85 runners. With the ample road there is no problem starting and finding a comfortable easy pace.

T1D: Sugars with in running range and stable troughtout the event.

Post: Spagetti wityh a protein shake with in an hour of the event. 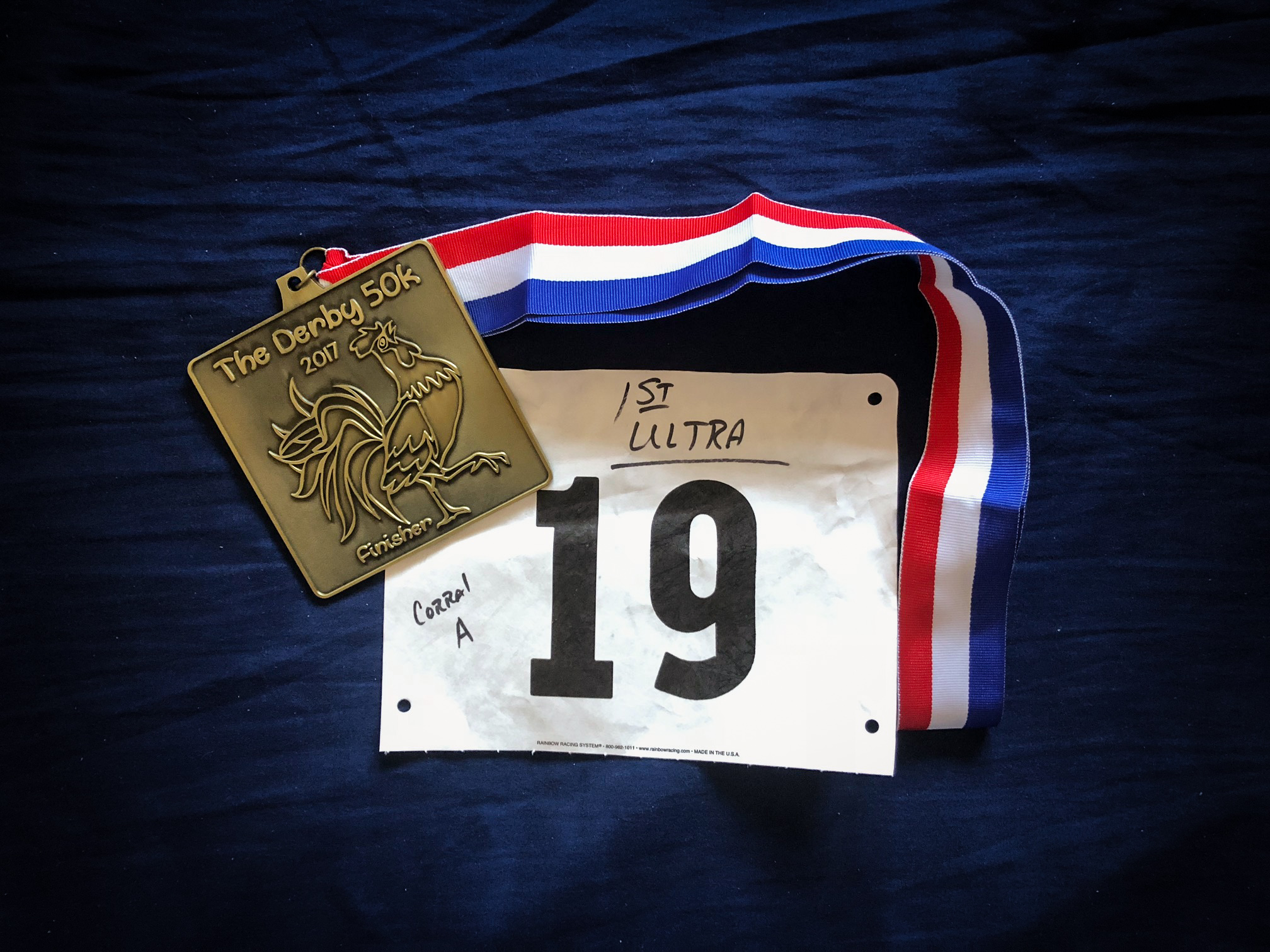