Alright, I already completed couple 5k events and them jumped to the half, skipping one distance event that lies in between. This was my 1st 10K, the Scrub Run 2012 in Raleigh. Although it was kind of a just for fun event, I did not apply my previous learning from other event to this one. Maybe I thought that because I have done a Half Marathon the month before this event, which is more than twice the distance, I did not need to prepare or plan ahead on how I was going to tackle this event. Also since my friend and I already signed up for another event after this, it was kind of a pre-race preparation race for another half marathon in November. My original goal was to finish within the hour. The second goal, just to finish. That reasoning came from already training more miles and running the previous 5k around the 30min mark. Yes I know and understand, that just because I was able to finish two 5k close to 29 minutes, just doubling that does not translate to less than an hour. But I guess being naive and inexperience you get this opportunity or permission to dream. 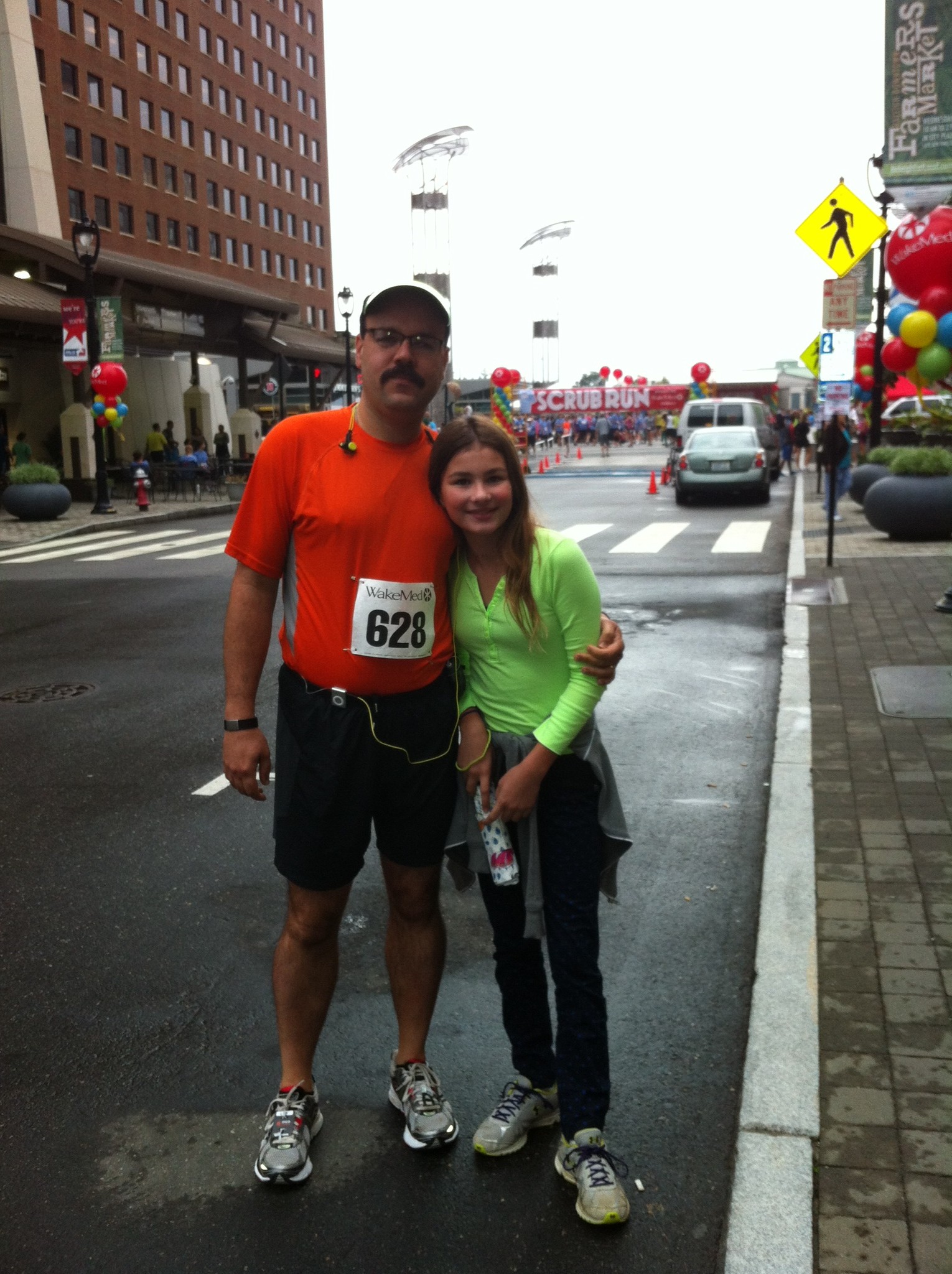 The race start and finish was located at the heart of Downtown Raleigh. This was very scenic, the feel and look of the somewhat big city. It is not a NY city or Chicago, but it is a great city with lots of history and peculiar locations.

It was great to have my family with me once again at he starting and finish line. That has always provided the extra calmness. It was pretty neat that instead of a running shirt you get a scrub, hence the scrub run. It was a little bit rainy and wet that morning. Met my friend at the start and agreed that we both were going to try to do our own PR, (PR for me for sure, since it was the first 10k) so we probably would not see each other other than at the turn around. For him this was his second 10k and again a preparation event for the upcoming half. He had a successful 10k three months ago in Greensboro at the Freedom Run, in which he came close to the one hour mark with a 1:05:42 and feeling that he did not push himself much. So he was also going after breaking the 1 hour.

The race started ok, had to weave between runners during the 1st mile cause it was very crowed at the start. Pace wise, I held pretty good until mile 4 with a pace in line with my goal. My friend was performing much better as I lost track of him after the 1st mile. At mile 5 and 6 I struggled a little bit. I had to walk some, two times. I pressed on at the end but unfortunately I was unable to meet the 1st goal mark of finishing under an hour, with a final time of 1:02:45. My friend was able to finish well below his original goal, finishing with a time of 58:39. That was an improvement of more than a minute per mile in comparison to his previous event an awesome job there. At the same time for me, this time things are not going my way. But knew that needed to make changes.

T1D:       Not paying much attention at this time, other than ok at the start of the event.