This was the second time running a race in this distance. At work they were already telling me “why? why doing another one? You already complete one not so long ago… You are insane.” Roland, a friend of mine also from work, signed up for this one as well. We ran together in past events, couple 5Ks and my last 10k just a month ago. At that last event Roland had the speed, so today I am going to try to keep up with him and that way I can secure a PR. We trained together, running after work and at the Tobacco Trail. We continue our conversation about training, blogs, web sites, magazine and books all related to running. This is going to be his first half, so there was a lot of questions. As I mentioned before this was going to be my second time doing this distance, so my experience on this was very minimal. I offer the knowledge from that race as well as the learning from online research. For this half I have the opportunity for the 1st time to have a drop bag, basically for anything I needed to drop near the start and finish area, for just before the event starts and stuff for after the race. Not really knowing what to have in the bag, I put a towel, shirt and extra energy gels.
Temperature was great a little bit on the chilly side and overcast. Woke up early in the morning, drove as early as possible after eating something at home, found some parking lot in a shopping area near-by, about half mile from the start. After arriving at the start and finish area I got a huge surprise, there were over 3 thousand runners in this event (I guess I was not as early as I though I was). Unfortunately, I did not coordinated or planned for a meeting point for the 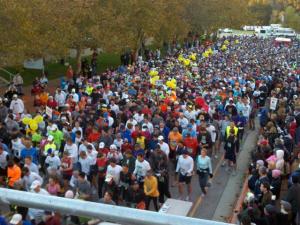 start of the race and I could find my friend at all. Previous event were small with three to four hundred participants. With all the runners and spectators I knew it was going to be impossible. But I was ok with it, it was an awesome feeling to see so many runners, so many shapes, ages and form. You can hear in their conversations the excitement, their concerns and nervousness, their previous experiences and their passion for running. Still, I am a little bit nervous, since I want it to PR and improve on my performance from earlier in the year.

The fueling plan was similar than the previous half and as training runs, one gel every 4 miles. I was going to also carry my bottle filled with Powerade Zero for my drink. My reasoning is to have some electrolites that were calorie/carbs free in addition to the water at the water/aid stations along the course.  I definitely do not want my sugars to go way high. It is not a great feeling when that happens. Closing to the start time of the event I gave up looking for my friend, thinking that I was going to be able to see him during the course of the run. I looked for the pacers, similar to my previous half, they should served as a guide of pace. during the last half I did not pay attention to the pacers. Today I was going to look for the proper pacer to follow. The 2:15 pacer should work, since the 2:30 pacer will not get me a PR.

The first few miles felt great and I was doing great time. With so many runners you can easily get lost in the crowd. I was enjoying every moment of it. Some familiar streets, as we were passing a similar route than the last 10k. Passing some and some runners passing me, I was making good time. I lost view of the pacers after mile 3, but feeling great and ahead of pace according to my watch. For mile 4 and 5, where miles that we planned to push because there were flat and down hill miles. So I did. 6 and 7 were mostly uphill, so a slower pace was going to be acceptable. But still I was going fast early on the race and by mile 8-9 when the multiple small hills showed up, the constant up and down which cause me to change pace constantly and completely lost the running groove. That got to me and by mile 10 I started once again the walking sessions. I saw my friend Roland, coming from the turnaround to the final long stretch, he was ahead of me about 3/4 of a mile and he was once again running strong. He asked if I want it for him to wait and I replied with a definitely no. I preferred for him to continue as he was going strong to the finish at a good solid pace. Me in the other hand not so good, walking and jogging was the norm by now. Seven times I walked since then. At this time I am not even checking my sugar with my CGMS or trouble shooting what is going on. I just want it to finish this and be over with.

Although I was not feeling that great, my original goal was to break the 1:20:00 mark and the second to PR. I got close enough, finishing with 1:20:59. Happy to complete another half with a PR, but not happy with my overall feel of the race.

Course:      It has some small hills through out the whole route with couple flat miles close to mid way.

T1D:           Early sugars within running range. During the event was not paying much attention.