This event is the last of the Fall Triple Crown Challenge. Unfortunately for Roland, my running training friend, he missed this one due to an injury. Temperature for this one event at start was very cold 43 degrees and dry. I got to event early grabbed my bib and walked around a bit. Even tho it was cold, it felt great. I decided to not wear the stocking hat during the race so left my hat near a tree just before the start of the race. As I have been doing during the past few events I took a energy gel with caffeine about 15 minutes before the start.Lots of participants in this event and lots of them were wearing costumes and silly add ons. It was a fun fun event right out of the start.

The race started pretty good, I situated myself in the back to let the super fast people ahead and prevent me from going too fast during the first few miles. Again I was going to be running by effort trying to push while picking a few runners here and there. As I was running I can see the participant also having fun, running and talking about running, races and other topics. I went pretty well during those first miles. I followed Superman for a while, then Catwoman and Wonderwoman next. Lots of super heroes and I started to think that perhaps I was too a Super hero. A few turkeys ahead of me and no they were not real turkeys. I close in passed them and held a steady pace. There were few hills but nothing really bad. Another Superman, that one took me a while to catch and pass but I continue to try to remain calm and keep well controlled pace. Gel at mile 4 and another one about 7.5, the plan was to get another gel at mile 9 to finish strong.

It was still cold and dry weather, so not much sweating going on. I start to get and feel very warm tho. With about 3 miles to go, I checked the time and realized that I was within target to break the two hours half. I also realized that mile 9 came and went and I forgot to take the energy gel. But I was not feeling like eating anything else, so decided that the gel was not going to make much difference at this time. At mile 10 I also started to do some math and I needed to be at least under 8:45 to break the two hours. I was feeling good so I press on, but could not held a controlled pace so there was lots of fast and slow pace 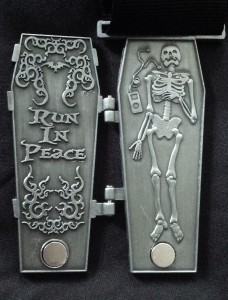 segments. The last three miles splits were 9:43, 8:51 & 9:38. I finished with about just 3 minutes shy of the 2 hour, with a PR, one of the coolest bling (a cool looking coffin that opens) so far and another Triple Crown completed. Very happy with the race and the performance.

Course: The route is mostly street with plenty room. Some hill but nothing too bad. A section in later part of the race is a narrow paved path mostly flat. That section is prepare with Halloween theme decorations.

Venue: Start/finish line with a few vendors with food, coffee and water.

T1D: Sugars with in top of running range at start.

Race: Water at the water station. Bottle of Powerzero.