I remember an earlier post where I mentioned that during my half marathon at Disney there was this craziness challenge called the Goofy challenge. Well the smart guys at RunDisney decided that being Goofy was not enough and they created an additional challenge the Dopey Challenge. The Dopey challenge consist of back to back events for four days. A 5k, a 10k, a Half Marathon and finally, if you are not dead from the first races, a Full Marathon in the span of those 4 days. This was the inaugural year of the challenge and also the inaugural event for the 10k, Minnie Mouse theme. So, my friend Roland and I decided, to be insane and go for it.

We new that the signup was going to fill fast. The Goofy Challenge filled up last year within the hour, so for this one we both took some time and waited behind our computers and as soon as the sign up was available we were in the web page trying to get in. This really felt like the equivalent of the virtual version of Black Friday before the doors opened at Walmart or Bestbuy. Or like watching a bid on Ebay go up of something you would like to purchase and you are in hope that you do not get outbid at the last second. We were very fortunate and got in. It was little bit expensive but I have to say it was worth it. The event filled up and stop allowing sing up for the Dopey Challenge within 35 minutes from what we were able to tell.

For these back to back events, my friend and I treated them as a Marathon training plus. Since we new the time, pace was not important we focus our energy and effort around endurance. To know how to run with tired legs. We switched our plan to a normal small runs on Tuesday and Wednesday, while focusing on a Friday, Saturday and Sunday longer runs. This with Saturday and Sunday having back to back slow long runs. Another aspect was to test the recovery between runs and for me how my sugars were holding with the long runs. The fueling plan remained the same, every 4 miles with some carbs and adjusting bolus as I go depending on my CGMS readings. For recovery, I was making sure to pay more attention of the kind of food I was eating. Making sure there was a combination of protein and carbs that will allow me to sustain recovery and be ready for the next day. 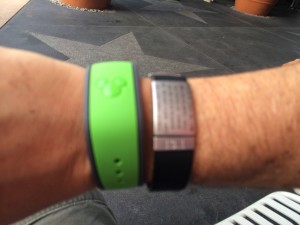 As mentioned in the previous Disney event post, the shows and event were extremely well organized. My running training friend Roland and I traveled and stay in the same hotel at the park premises to take advantage to the event transportation and not worry about parking or getting to the right place. While in line to check in the hotel, you can quickly realize that most of the people there were runners doing the same races. In front of me was a runner with his wife from Mexico. He was a seasoned runner and was part of the corral A, the fast runners. We chatted for a little while until we got close to the check in counter. I checked in, dropped my stuff at the room and went to the Expo where I waited for Roland to arrive since he was coming in a later flight.

Picking the bib up and timing chip was very easy and well organized similar to the previous year. This time there were two Dopey bibs one for the 5k and 10k, the other one for the Half and Full. Picked all the technical shirts up, a total of 6 nice running shirts and because this was going to be a one time adventure for me some I added some commemorative pins. The Expo was huge and pretty nice, with a list of speakers, including Galloway. Listening to the talks was something I missed during last year’s event. Although most of the talks covered the basics of running, there was always something to learn or re-learn. Like a re-fresher of things I should be doing. Not many new products but nice to see the different products and items I use. Also nice to hear people asking similar questions about them and getting a consistent answer. I spend some time taking to the guys a Newton shoes, the Galloway program, The Stick and others. Roland showed up and we went to pick his bib and spend some more time at the Expo.

That night we checked the hotel cafeteria/restaurant/food court area for food availability in the morning. The microwave was accessible to us and hot water also was there for us to use. That was very important. I bought some 2% milk to take to the room for the oatmeal and coffee in the morning. Even thought we might not need it for the first two short events (5k and 10k), I want it to have it to rehearse the routine both days to be ready for the half and full. I did a final check on the equipment, shoes, running shirt and shorts, body glide, bib, cap and mp3 player. 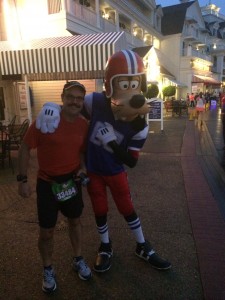 The next morning, 1st event day, the wake up time around 4:00AM. This early to be able to get ready and be at the hotel entrance where the runners transportation pick up area was. I just did some coffee (Milk and some instant espresso, closest thing to a latte), since it was going to be just a 5k. I did not do the routine of oatmeal, coffee and gel prior to the race. But I had enough time if needed. AT the starting waiting area we see a tons of people for the Dopey challenge, not many runners just doing the 5k, most have the Dopey bib. There were only like 6 big corrals holding all the runners. I believe they announcer mentioned that there were 12k runners for this event, few of them with families and kids.

Different from last year’s half a Disney, this time I have plenty of time for all the events to take it easy, take many walk breaks and take pictures. And basically that was what we did with a time of close of 55 minutes for a 5k. We did take pictures with the characters and enjoyed the event, music and show. The only thing that did not turned out was the Go-Pro camera that I brought to record the experience. Unfortunately I had a corrupted memory card and I was unable to record. 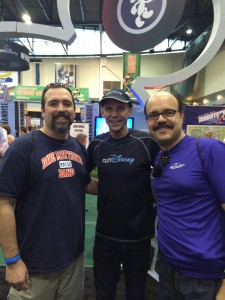 After the event, we did a quick pit stop at hotel for breakfast and back we went to the expo to watch some more of the speakers and check more of the exhibits. A picture taken with mister Galloway was a must. Now I was able to cross that item from the list “You are a runner if” 🙂 Now I will be able to say “checked!”.

Course:  Street course. Mostly flat and one loop around Epcot Center, very scenic. The water and aid stations are well manned and awesome. Same as previous year you need to watch out for the cups laying in the floor, it becomes a little bit slippery. Due to the amount of runners and picture opportunities I will not consider this event an event for a PR for time. But if this is your first 5k (Expensive 5k if it is your 1st) and you just want to finish, I recommend this one 100%.

Weather: Cloudy and wet. Temp was around 63° but very humid.

Expo: The Expo similar to last year one of the best one I have ever attended.

T1D: Sugars within running range but on the high side. No issues during the race.

Post: Banana, water and snack. Normal breakfast and lunch after.