The American Tobacco Trail, the home of most of my training runs. It is also the location of the event that provided me with my 1st Marathon. This time I was back but running the half. I want it to run the full marathon but, the triple spring crown substituted one of their events with this half and if I want it to qualify for the Triple Crown, I must do the half not the full. Which to me was silly. Now this 13.1 miles distance does not look that daunting. I have been doing 12-16 milers every week since I was training for my previous event. All this now without or with barely any walking. Another good change in my training is the fact that the last few training runs have been at Umstead Park. The importance of that is that the trails at that park are more challenging and very hilly route. I was hoping that maybe this race was the one in which  I was going to break the 2:00 hour mark for the half. That is one of my goals for this year. Also for my training plan I continue to do back to back long runs, with at least 12 miler on Saturdays and again 12-16 miles on Sunday. In theory those back to back long runs were suppose to help me be better adjust to run with tired legs.

The temperature that morning felt great, low temperature, dry. My friend Roland was also doing the triple crown. Since we were running most of the same events this year we were also running most of the training runs together. Some more familiar faces, there was a huge tent for the runners to keep warm. We got inside the tent and found a spot to sit down near the edge of the sidewalk. Our original plan was to start way in the back of the pack (as usual) take it easy during the first couple miles and then start increasing our the pace slowly.

The runners started to lined up in a small stretch of road that held the starting and finish line. Both the Full and Half marathoners were going to start at the same time. It was about 250 meters downhill followed with about a 1/4 mile uphill and another 1/4 down hill. Then the rest of the race was basically rolling hills or virtually flat. Also the first three miles were in the road, the same on the way back for the last 3, since it was a in and out back route. My friend and I started together for about 3/4 miles, then while in the middle of a bunch of people, I checked my pace and it was super slow, close to 12 minute pace. I started to think that if I am going to break the two hour mark, I cant run this slow, even if it was for the 1st mile. I began to press on a little bit and unfortunately could not find see Roland after that.

I grabbed water at the stations but trying not to slow down. The route is mostly straight, not many turn with the exception of the turn around half way. While I was heading out towards the turn around, at the trail portion of the race, I saw a friend from work, Pete. He saw me first and said hi and encourage me to press on. Also another runner, the father of my daughter’s friend. He has completed few half already and started running about half a year earlier than me. I said “hey” as I passed. I was going at a fast pace but still in control. I started passing the pacers, to some I was able to see the time, others I could not read their flag/sign. I reminded that I must concentrate in my form and start to pick runners out and holding steady pass them.

Past the turn around, I keep the pressure and crossed path with the two friends, they cheered for me and that gave me another wind to go at it. With about 4 1/2 miles to go, I saw another pacer far ahead, “I believe is the 2:00 pacer.” I thought briefly as I was trying to recall the other pacers I have pass earlier. I slowed down just a touch to catch some energy and air even thought I was 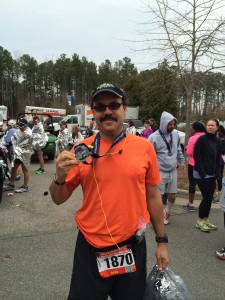 still feeling good, and given that I passed the other pacers, and I started way in the back I figure out that if I just catch on that pacer and stay with that group I was going to finish well below the 2 hour goal. I am very happy at this time and press on, steady and still in control. With 2 3/4 miles to go, I get close enough to the pacer, very happy and confident. All that was great until I was able to see clearly the flag he was carrying. It was the 2:15 pacer.

At that time I realized that it is going to be tough but, I was still thinking that my gun time was a late one, I could press on and shave couple minutes for last 2 miles. I tried, believe me I tried. I ended up with 2:06:27, close but not close enough. I still take it.

Course: Great ample road right of the start, narrowing a bit at the entrance of the trail around mile 3. With the exception of couple small hills during miles 1-2 and 12-13 the course is mostly flat with long rolling hills.

Expo: Nice expo at the conference room at a near by hotel. Many booths and freebies.

T1D: Sugars with in running range at start.

Race: Water at the water station. A Gel every 4 miles.