After a successful back to back four day events with the Dopey Challenge, I needed to start working on crossing another state from a 50 states challenge. So far I had NC and Fl, so my friend Roland and I decided to tackle Arkansas for couple reasons.

Did I mention the HUGE bling!!!? Again this was another far enough that we had to fly and quickly come back event, similar to what we did for Disney. The theme for this Marathon was Epic and indeed, it will turn out to be an Epic adventure for me. 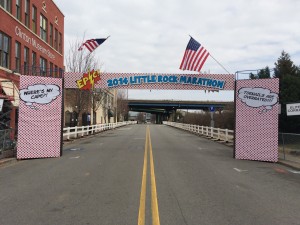 The temperature felt very cold on that Saturday, and it was about a mile to walk to the Expo and start line of the race. I started to think that I might not be dressed well enough for this event. On that afternoon, I went to pick the bib, the expo was decent compare to others. Not as big as the one for Disney, but good. Met with Roland and walked around the expo area and vicinity restaurants, checked the Hotel’s breakfast area. The hotel was going to have some early breakfast set for the runners. That was really good news. The Little Rock Marathon is a main event for this area so it is a big deal for the Hotels and businesses. The route have you running around downtown area, in front of Bill Clinton’s Library and other very cool buildings and neighborhoods. One of the main challenges of the course is a close to 2 mile up hill segment at mile 14-15 and some change.

The original plan of attack was for us to run together all the way to mile 14, at that time I was going to stop at the water station check sugars and do an assessment on how we were doing. Depending of how we felt at that time, either one of us press on, both of us or just continue at the easy pace. We needed to catch a plane that afternoon and even though the airport was near by we did not had too much luxury of time like we did at Disney. That night we found out that there was a group of people (People that will take to finish the marathon in about 6 hours) that were going to be allow to start at 6:00 AM early start instead of 7:00AM. The only condition was that they were not supposed to finish earlier than the 6:00 hour cut-off and having the risk to get DQ. We opt not to do that and be on the safe side, since we were aware that a under 5 hour marathon time was possible. The weather was going to be a challenge, since there was a storm approaching the next day.

Next day morning, woke up early again, prepare bib, shoes, running clothes and the trash bag to use just in case of rain. We knew the chances of rain was very high. Got down to the lobby, prepared the usual, oatmeal, coffee and water. Quick stop to restroom and started the 1 mile walk towards the starting line. Temperature was ok, little warmer than I was expecting which is good, overcast but no rain another good sign. Once we got to the corrals, there was some drizzle not bad, we put on our trash bags and waited. Wind started to pick up a little bit then little more than just a breeze, felt good since it was still little warm, specially wearing the bags. 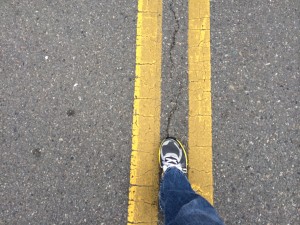 The event started and the rain stopped, it took a while for our corral to start but we were on our way. I removed the bag since it was getting me too warm, but kept it just in case since we knew that a storm was possible in the later part of the marathon. All was good so far, we crossed a long bridge, at the other side I had to make a quick stop to porta-potty. I guess all the other runners had the same idea, the line was super long, so there was an alternative, other runners were going behind a large shed. So I proceeded and did the same. We continued with our plan, about 3 to 4 miles in, the wind started to pick up, bad and started to get cold. I put the trash bag on again. While crossing the bridge on the way back of the first few miles, the wind was strong enough to make it difficult to run on straight line, once we crossed the bridge we head out back to downtown and we were protected for a while by the buildings from the wing.

After leaving downtown and heading to some neighborhoods, the wind calm down enough but once again the temperature drop a little bit more. At this time running was great, I was feeling great. Along the route, tons of support from the community. I was great to see, bands, home owners, church congregations, choirs, office workers and many others on the side of the road. All Providing support, water, food & big cheers. I have never seen the community getting so involved like this in any of the events that I have attended in the past, specially with this type of weather.

As we were now past the mid point and closing to mile 14, just before the two mile uphill, we stop at that water station to reload and for me to check sugar. The sugars were good, and we were feeling good. We head out running at a steady pace and the climb was there waiting for us. I was feeling strong, passing people and holding a steady pace with a steady breathing rhythm. Roland slowed down a bit. After a while, I looked around and could not find him. I pressed on as per our agreed plan. Lots of runners stopping and starting to walk half way to the top, I was feeling strong and continue. Every time I passed someone, I was regaining some more energy.

At the top with probably a quarter of a mile before going down hill for about 1 1/ miles, I accidentally dropped my water bottle, had to turn around to pick it up. But no problem, feeling good. Going down hill, I started to gain speed, my cadence was really good. I lengthen my stride a little bit, running fast but well controlled. Around mile 17 1/2 at an intersection a policeman was telling the runners something about the race and a Walmart. I could not understand, while I slowed down a bit to ask another runner, while crossing a bridge, the runner says that he thinks the event has been cancelled. CANCELLED?!!! 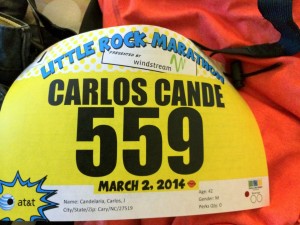 I wonder why? Did something happened earlier? closer to the end? I still have around 9 miles to go. I did not know at that time, there was another big intersection and plenty of policemen directing the runners. As I got close to the area, they were directing the runners to do a right turn, instead of a left turn. I stopped and asked, the police officer instructed me to turn right, head toward Walmart were the runners were being shuttle toward the finish line. The event was cancelled due to the upcoming storm. Since I knew my friend should be shortly behind I waited a bit and thought about what to do. Only few runners were going left.What to do, what to do…

A couple, in tears and almost crying, asked another officer, they explained to him that they have been training so hard, this was their first marathon. The officer told then that if they continue it was going to be at their own risk, no support from water stations or medical station will be available. So they agreed and head out and turned left. I thought about it for 2 seconds and head out that way with them. I am finishing this race and crossed Arkansas from my list. I only hoped for my friend to do the same at the intersection.

During the next mile, it started to rain and temperature started to drop fast. The overcast skies turned dark, very dark. The wind pick up once again started to little bit. At mile 19, there was a water station that was being set apart and dismantle. The event coordinators at the water station told me again that the event was cancelled and to turn around again back to the Walmart. At that time a police car was telling all runners that event is cancel and runners only have 60 minutes to finish. I had 7 miles to go, I stopped again, re-think my decision and decided to pressed on. I figure out that if I can squeeze a 11 minute mile here and there I will be ok. But by that time, my legs were very tired, heavy and super cold. Stopping and not moving much, earlier at the intersection was a very bad thing to do. Mile 20 came and went, then a turn around about mile 21 to head back towards the finish line. Now sleet was falling, I was barely feeling my arms, the legs were destroyed at this time. I was still chugging along, walking every so often (Trying to do fast walking to keep warm). The following water & med stations were closed. There were couple event coordinators on their bike going up and down on what was left of the route. I asked them if the finish line was still manned and if they are still giving out the finisher’s medal, (It was a huge medal, what can I say, that was what was on my mind. I needed the proof) they did not know, but encourage me to press on that I was almost there. At this time still not feeling my arm, legs are dead and I started to hear the announcers at the finish line. That sound cheered me on and I started to convert the slow walk to a faster walk and produce a decent jog. Took off my plastic trash bag with about a 1/4 mile to go and crossed the finish line, with a smile and got an official time and the huge medal and finishing well under 5 hours. It was indeed Epic!!! 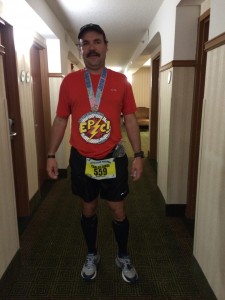 I waited a little while for my friend but thought that he might of turn right at the intersection, I hope he did not. I grab my bag and headed out to walk the mile back to the hotel. The walk was much worse than the run, windy, icy cold. I was wet and no trash bag, just my wet jacket and now I was carrying an extra 5 pounds of bling, lol I got to admit I will never forget this adventure. As for my friend, he told me that he got to the intersection and thought about what I would do and turned left to continue and finish the event just few minutes after I finished. I am glad I made the right decision at that time, crazy but the right decision. It was Epic.

Course: Great ample road right of the start. Mostly flat the first 10 miles with the exception of a bridge. After that lost of short hills a two mile uphill and mortly flat towards the finish line. Water station setup and distances were really good. Pretty well staffed too. The course was well marked too and the people were great.

Expo: The Expo was very decent

Weather:At start, overcast skies, 48º with 87% humidity. Temperature dropped fast and wind picked up with the additional rain, sleet, thunder. (When I left the venue the temp was around 66º)

T1D: Sugars with in running range at start. CGMS was not providing accurate reading compare to body cues. At mile 14 they were good.

Race: Water at the water station. Carried my E-fuel and extra to replenish at mile 14. Energy gel every 4 miles 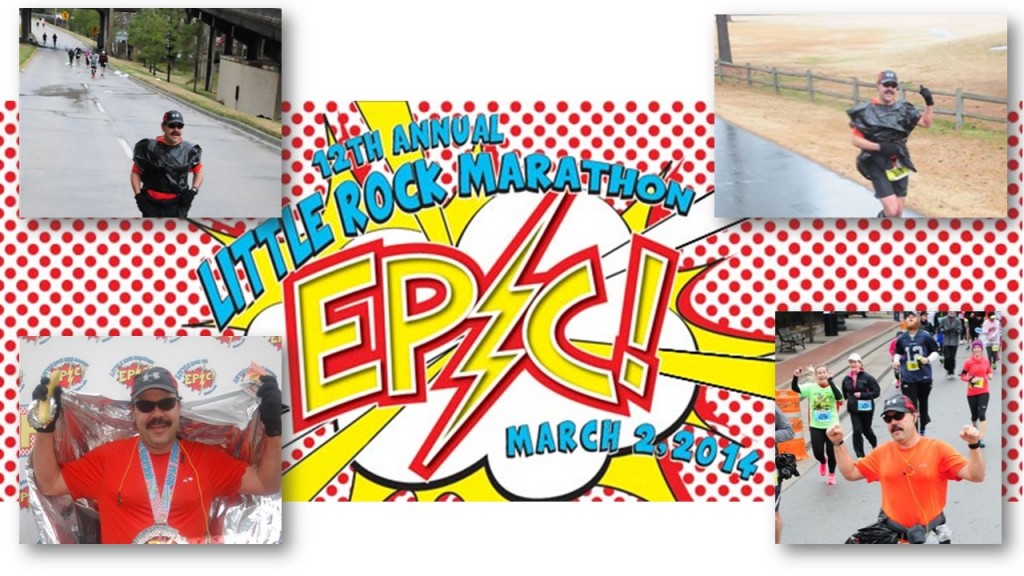