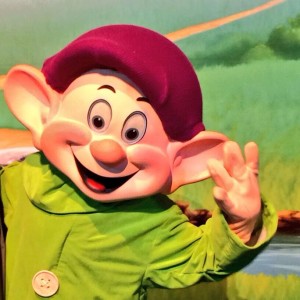 This was the big day, the final event of the Dopey Challenge, the Grand, Full Marathon. Now that we basically were adjusted to the morning routine for the past three days, somewhat rested and we were ready for the Full Marathon. Same process for preparation, pre-event, running and finish sequence as we did for the 5k, 10k and the half, but with one only difference, we needed to hurry a little bit during the event since we had a plane to catch after the event. Everything is packed and ready for a quick shower and departure.

We started as planned, around 2:45 in the morning, a quick visit to the hotel cafeteria area, I had the morning oatmeal and coffee. This time even more runners in the cafeteria area this time. Some of them looked tired, some excited and some just plain crazy. We were done with breakfast, quick stop at the bathrooms and made our way to the bus areas by 3:20. We had to wait a bit this time for the bus as the waiting line of runners was longer than previous mornings, but got to the event area with no problem.

Same pre-race waiting area for all the events, tons of runners and some wearing Disney character and other types of costumes. I had a feeling this was going to be a great day. The race start line was at the same spot as the for the half marathon. Just before heading toward the start line, I check my sugars and they are within the range for long runs (170-210). Quickly we walked to the drop bag tents and dropped our drop-bags. Walked about 3/4 miles towards the corrals. Again at the corrals, great music, more fireworks, the count down for each corral and off we go.

Now even tho this was early I was feeling physically good, leg felt rested, it was the lack of sleep that had me a little bit light headed. But there was a lot of excitement, finishing 4 back to back events is a big accomplishment. The initial route goes again from Epcot towards the Magic Kingdom, similar to the half. We did walked the water stations, something that the prior events we did selectively, but no stopping for pictures with characters, since we have been doing that in the previous events. We decided that if it was either a super short line or a must we were just continue to slowly cover the distance. 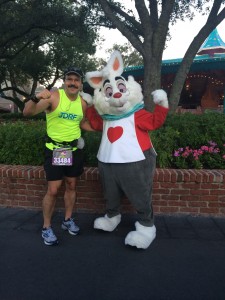 After the Magic Kingdom we head out back, but this time we go towards the race track for a nice run at the track and a nice line of classic cars that kept you once again making you forget there are many miles to go. There is along way towards the new wild life theme park and then ESPN sport complex. The sun is fully out and there was not much cloud coverage. We were making good time although it was getting warm. We were also going at a very easy pace, still walking all the water stations and grabbing one or two cups. We stopped at the 18 mile station to check sugars and they were ok. It was a relief to know in addition to the GCMS readings, since I was a little bit concern that with all the events, physical stress, tons of fueling and taking slow that it was going to drive my sugars higher.

Then I did not realized that my glasses dropped from my bag until the race was done. Since I had them early in the morning because it was dark and now I was using my prescription sunglasses. Fortunately I had a spare ones back at the hotel that I use. 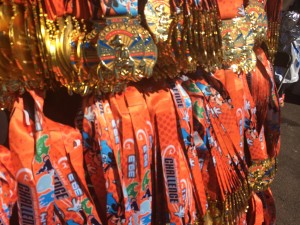 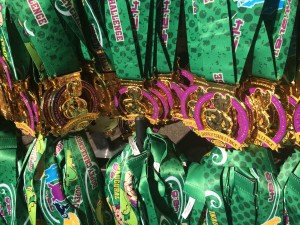 At mile marker 20, I came to one huge realization. I am feeling GREAT!!!! Legs were good, really good. I am fully awake, sugars were also good and I am going to make it. Not only I was going to make it, I am going to feel great too. A burst of energy and a huge smile took over me. I know our current pace was not going to get us close to finish before any PR (Not by a long way) But that was not the intention of this event.

A quick run to the Disney Studios theme park which required another set of few turns here and there. We continued to walk the water stations, feeling great and now moving back to Epcot.  As we were getting close to the Hotels nearby Epcot, we caught up with the lady from yesterday. She was doing great on her run, we chatted for a while and press on. As we were getting close to the entrance of Epcot we saw a line for a picture with Dopey NICE!!!. This was a must, we had to stop for it. Hey, it was the Dopey Challenge and a Picture with Dopey was a must. 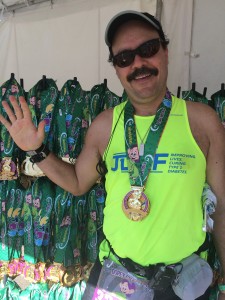 We finished and crossed the finish line strong and with a huge smile. From there the quick walk to get what we worked so hard for, the Goofy and Dopey Challenge medals. After getting our drop bags a quick change of shirts, snack and to get back to the bus. We have a plane to catch.

Course: Over 25,000 runners. This is a street course. Mostly flat, with some rolling hills and three looped segments. Extremely scenic, going thru all 4 Walt Disney Parks (Walt Disney World, Animal Kingdom, Disney Studios and Epcot) and ESPN sport park. Don’t forget similar to the half, you get to run across the castle. The water and aid stations are very well manned, spaced and awesome. Watch out for the cups laying in the floor, it becomes a little bit slippery. They offer energy gels, different flavors too at two locations for the full. They are plenty of bathroom along the route too. Including the ones at the park that you can use. There are awesome spectators cheering you along the way in several segments of the course. Several school bands providing their music and support. Due to the amount of runners and the picture opportunities similar to the previous three events, I did not consider this event an event to PR for time. But if this is your first Marathon and you just want to finish, I recommend this one 100%.

Race: Energy gel every 4 miles. Water at the water stations I was carrying Cytomax in my water bottle.

Post: Banana, water and snack. Later lunch at airport, prior to the flight home.