By having the 5k and 10k events under the belt we focus our energy to the half, we are now in serious endurance distance event. Do not get me wrong, is not that 3.1 and 6.2 miles are not serious distances, they are and do offer their own set of challenges, but with the half, you start adding and playing with different set of variables like, the need for fuel during the event, increased importance of hydration, specially during warm and sunny weather also the longer time on your feet the chances that something needs to be adjusted and many others variables that I am not even aware off.

We also knew we had to keep in mind that the Full was still ahead of us, the next day. Taking it super easy was a must regardless of how well we were feeling during the run. Plus we have already been at the expo for hours in the past couple days and perhaps not much walking if we decided to go there again. So there was not really much to do today, or plan, no real reason to finish too early and no reason to put in jeopardize the challenge. 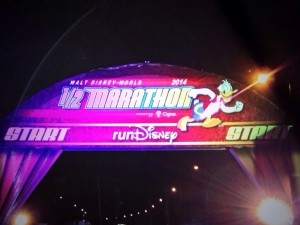 We started the day as planned. Around 2:45 in the morning, changed into running clothes and load up the hydration/fuel belt and ready to go to the hotel cafeteria area. Again, similar to prior days, the usual morning oatmeal and coffee to quickly get in line to get the event transportation bus by 3:15. This time the cafeteria have more people having breakfast and other walking towards the lobby to get the transportation to the event that the past couple days. More traffic as well to get to the start waiting area. At the start event area it was a little bit damp from the overnight rain. It was also much cooler temperatures than the previous year which was great, humid but great. We grabbed a trash bag from the trash cans near the waiting area and used it to sit at one of the wet benches. Definitely many more runners than the previous two events. We believe the announcements said there were around 23,000-24,000 runners in this race. All shapes, all sizes great to see so many people excited to be able to participate. Some of them doing just the half, some doing the Goofy Challenge and of course the nuts cases (Like us) doing the Dopey Challenge. I once again I check my sugars prior to moving to the corrals and dropping the drop-bag and the drop-bag tent area, they were ok.

The corrals set up was different than the 5k and 10k setup also the start location is not from the parking lot of Epcot. The waiting area was, but the starting line and corrals were nearby at the main road. There were more and larger corrals to accommodate the amount of runners. That allowed them to stagger the start to control the flow of runners in each section. From the waiting area to the corrals we had to walk close to half mile. Similar to what I did last year, so no surprises for me this time. The music, show, jokes, comedy as usual, the only way Disney can do it. It really made the wait not so bad at all. We were assigned to corral J. So 9 corrals in front of us in addition to the elite corral that was for runners that most likely were contenders for money awards finishes.

Once again, loud music and fireworks!!!! with the departure of each corral. Corral A, Corral B, Corral C,…(about 5 minutes between each corral) I take my energy gel at the start of Corral G,  …, Corral H, Corral I and off we go. 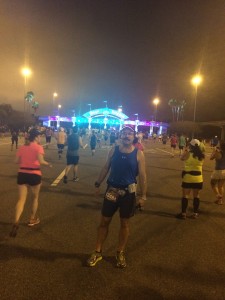 The first few miles of the route for the Half, takes us to the main road towards the Magic Kingdom. First the car-port parking toll entrance of the Disney Park, the race track on the left side, pass the contemporary Hotel on the right and to a side entrance to main street in the Magic Kingdom. After getting in the park you can feel the excitement in the air. Spectators are on the side of the road at the entrance and in the park cheering, clapping and encouraging runners. As we ran in Main Street you can see the castle and the sea of runners and spectators. We turned right at the center garden area from which you can get to the other areas of the park, toward Tomorrowland. Along the way so far we have seen lots of picture opportunities. Since we already got some from the 5k and 10k and still having one more event tomorrow, we were very selective to which one we were going to stop and make the line. Now we passed the few attractions in Tomorrowland and around toward Fantasyland were more picture moments awaited there. Off we went thru the castle. We walked and took water during the 1st water stations. At the second water station we stopped for a bit longer. Unfortunately we dropped one of the water/fuel bottles and the main lid broke. Not much was lost, but it was going to spill all the content if we did not addressed the issue. So we needed to improvise a bit so we won’t loose the energy drink along the course. We asked at that aid station for some plastic wrap to use between the lid and the container, providing a seal that will prevent the content to continue to spill out. It worked! 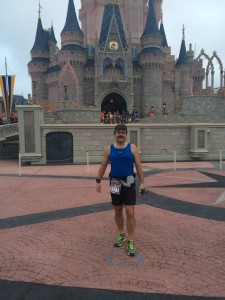 After the castle, a quick right turn towards Fronteryland to cover the other side of the park, Woody from Toy Story and a little bit further Winnie the Pooh were there. We go out of the park into a service road from the side of the park and towards the Grand Floridian and the Polynesian Hotels.

One crazy thing that you can only encounter in these types of events was a runner that was carrying a tuba along during the half. This was passed the halfway point and what was more amazing was that when he saw I was recording the event, he started to play the tuba. It was awesome!!! Many runners wearing costumes and signs, very creative and definitely it does make you enjoy the distance better.

After getting out the service road, then head out toward Epcot for the usual Epcot route around the main park area. During the course of the half I check my CGMS a few times, specially while walking at the water stations. Sugars remained steady, but in the upper side of the running range. While running at Epcot we saw this lady (Probably in the late 60s) which was also doing the Dopey challenge. She was doing great, we hang around for a little next to her, while we chatted a bit and wished her a strong finish and a good run for tomorrow. It was nice to talk her and kept our mind away from the race, tired legs and the sleep depredation state, lol. 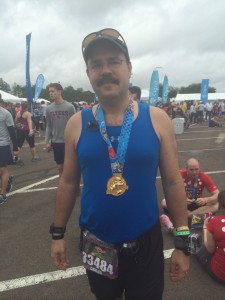 We grabbed our medal and walked again towards the Goofy and Dopey Challenge tent to get the official Half Marathon completion bracelet/band which was necessary to complete the Dopey Challenge and receive the extra bling. On the way to the finisher’s area, we quickly stopped at the aid station to proactively ice Roland’s foot. This was not necessary because he was in any pain, but to prevent it, since tomorrow we still had the Full Marathon we did not want it to take any changes. In previous post I have mentioned that he injured his foot and although he quickly recovered from it, we did not want it run any chances, After grabbing the drop-bag, I quickly check my sugars and were a bit on the high side. More than I want them to be, so I did a bolus adjustment to get them back in a decent range, while adding extra for the banana I was eating from the snack box. I dried with a towel and change shirts to be more comfortable. Near by was I saw another friend from work that was running the half with his wife. Pete, is another runner from NC that I have seen training near the America Tobacco Trail near where I live. He mentioned earlier that he was keeping his wife company on her first Half-Marathon accomplishment. It was great to see them there and being able to chat about the event.

Tons of picture moments, music and shows. Once again we took it very easy, I was more tired from being awake so early three nights in a row and not because of my legs, but I was still fresh and with leg energy at the end of the event. We finished taking about twice the time of what we normally take to finished a Half-Marathon, but hey with lots of walking, lots of waiting in line for picture opportunities. It was worth it. I am ready for the Marathon.

Course: Over 25,000 runners. This is a street course. Mostly flat, with some rolling hills and one gigantic loop. Extremely scenic, going thru both Walt Disney World and Epcot. Don’t forget you get to also run across the castle. The water and aid stations are well manned and awesome. Watch out for the cups laying in the floor, it becomes a little bit slippery. They offer energy gels, different flavors too. Awesome spectators cheering you along the way. Several school bands providing their music and support. Due to the amount of runners and the picture opportunities I will not consider this event an event to PR for time. But if this is your first half and you just want to finish, I recommend this one 100%.

Expo: The Expo similar to last year one of the best one I have ever attended. Lots of products, talks and information.

T1D: Sugars with in running range at start. Slightly higher during the race.

Race: Water at all stations. Two energy gels during the event. 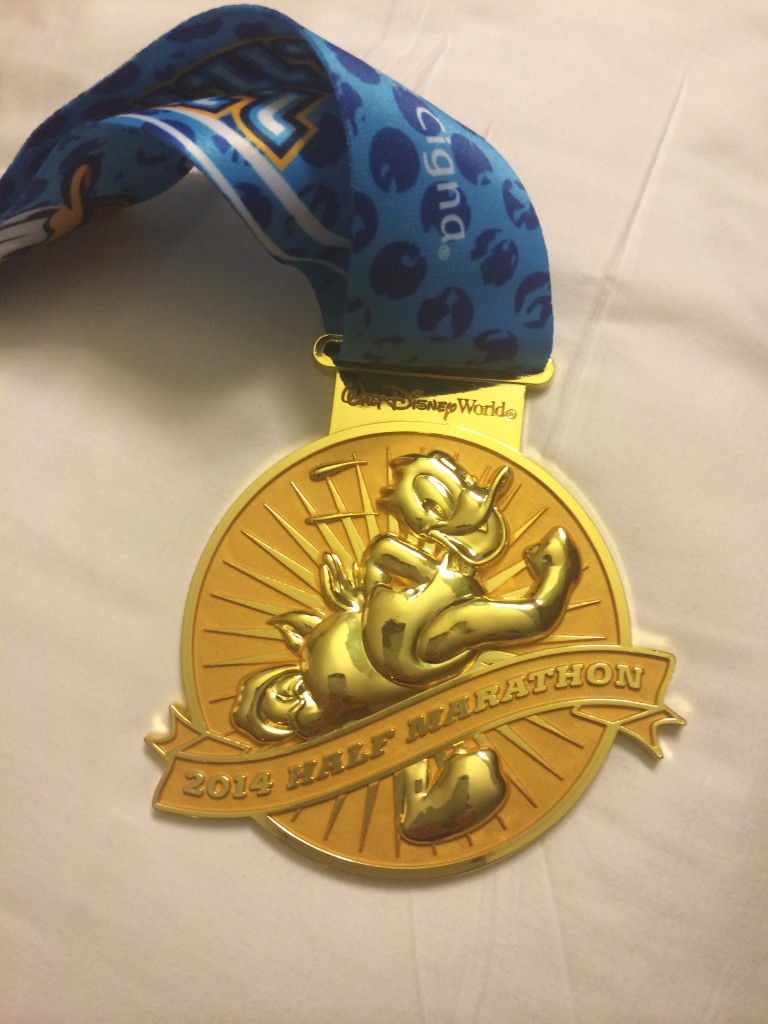