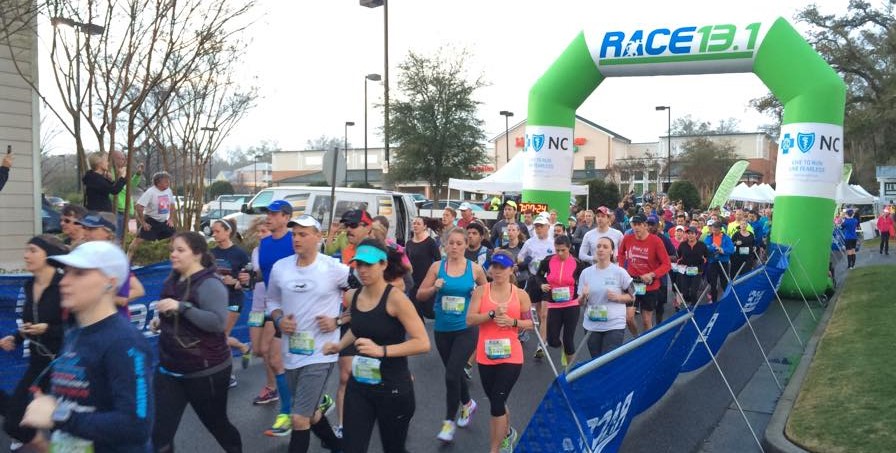 This was the 1st event of the 2015 season and my 20th Half Marathon. This was also part of the 13.1 series which in 2015 will have more than 15 events to choose from. And what it was great about that was that a $200 season pass allowed me to run as many events I want it to attend. To basically break even I needed to run just 4 events. I already signed up for two others and thinking about another one for the spring season. This event at the coast was also in preparation for the Full marathon coming up is a few weeks.

I had been training for a while and ran a few 18 and over 20 , so the distance was not going to be a problem. Speed wise I have been doing my speed work at the gym on a treadmill since it has been very cold, icy and dark outside. Too dangerous to run when is so dark outside, since I do not have a vest or lamp with me yet. For speed-work I have been doing Yassos. For this event I have completed 10X of them for a few weeks close to 7.9 to 8.0 MPH and then back down to 6X then 8X but increased the pace for the interval at 8.1 & 8.2 miles per hour. That will put the pace close to 7:15 – 7:20 with 1% incline for the 800m (Half mile). The reason for that is to target a goal of 4 hours or better for the marathon, since last time I was short by 2 minutes.

No hill work, with the exception of a run three weeks ago in which I decided on an easy run to play with the settings of the treadmill to understand the profile of the hill workout in the machine.

I think for this event from the perspective of workouts and runs I was prepared. From the nutrition side, it has not been that great. I have been in conversation with my health coach around my nutrition and we adjusted couple things, 1) Increase fiber & 2) Increase protein during snacks. Which it was not necessary a problem, but I kind of lost focus on what I was eating for breakfast and lunch and started to load those with more quantity with the lower value of nutrition. Dinners were better controlled but still, the late night snacking was another story. I have been losing weight, although good, I do not want to lose too much too fast, especially with all the long milers that I have been doing. I prefer losing weight slowly. Right know bordering around 181. So my choices for food have not been that great and I know I should be doing better.

I travel with my wife and daughter to the coast for the event after my daughter’s swimming practice. Since I needed to get my bib, we drove and did not want it to have a sit-down lunch. So, we went for the easy burger some fries and kept driving. At the location, got the bib, milk and banana for the morning and a few other minor things for just in case. My daughter wants to go out for seafood (Yes, I know, I know). But since the next day I was not sure if we were going to be able to go for seafood for lunch, off we went to eat seafood. We found this nice shack with decent reviews on Yelp and proceeded to have dinner. Early enough (I though) to have it completely, digested and out my system by morning.

We have some Buffalo shrimp for appetizers and I had a Shrimp Po’Boy with fries for the main dish. I did not eat much of the fries, but the shrimp was fried (and delicious) instead of grilled. Also for dessert, we went out for ice cream with a waffle cone. Really good ice cream but very filling. So as you can imagine not necessary a good meal for the night prior to an event.

Overnight I had so much trouble getting my sugar at a decent level, but manage to get good sleep. Next morning at 5:00 AM the usual oatmeal, coffee, and a banana. Check sugars before I ate and it was still a bit high. (Higher than I want it before running) So I adjusted and bolussed for the breakfast as well. Then drove to the event. A quick visit to the bathroom, drank some water and check sugar once again, still high, some more adjustment and the race was about to begin.

Temperatures were already hovering 53 degrees, it rained overnight and the humidity was in the upper 70s. No sun and a light cool breeze, it was all good. I did warm up about 10 minutes before the start, I jogged for about 1/4 mile with couple speed increase to loosen up my legs. I was feeling good.

I decided to instead of starting way in the back, to move towards the 2:15 pacer. Since the route was very narrow I did not want it to have to slow down because I can’t pass runners, especially if there were any choke points. That was a good decision as soon as we started I was able to move fast and just slowly passing a few of the runners. The first 3.5 miles were on the road and paved side, with a turn around about 2.5 miles in. As my previous half, I decided not to carry water/drink with me. I grabbed Gatorade at the water stations and that seemed to work ok. I was feeling ok, a little bit stiff but ok, I was running well under 9:00 min mile. I passed the 2:00 hour pacer and hang along some runners ahead of me that were holding a decent pace. We formed a line when passing and double up when we were in the lane. Then about mile 4, we got into the paved trail area away from the streets. It was good, humid and not many turns. Pretty straight with couple wooden bridges with basically not much elevation change. There were these guys in front of me that I was trying to pass but once in a while they will speed up, that went for about couple miles until I did manage to speed up ahead to catch another running that I was aiming for. Sugars were going really high and I was feeling it, legs were burning a little bit. Did an adjustment, plus additional to compensate for the energy gel at mile 5. Not feeling 100%, some heavy breathing and sweating a lot, but if I want it to PR today I needed to hang in there. 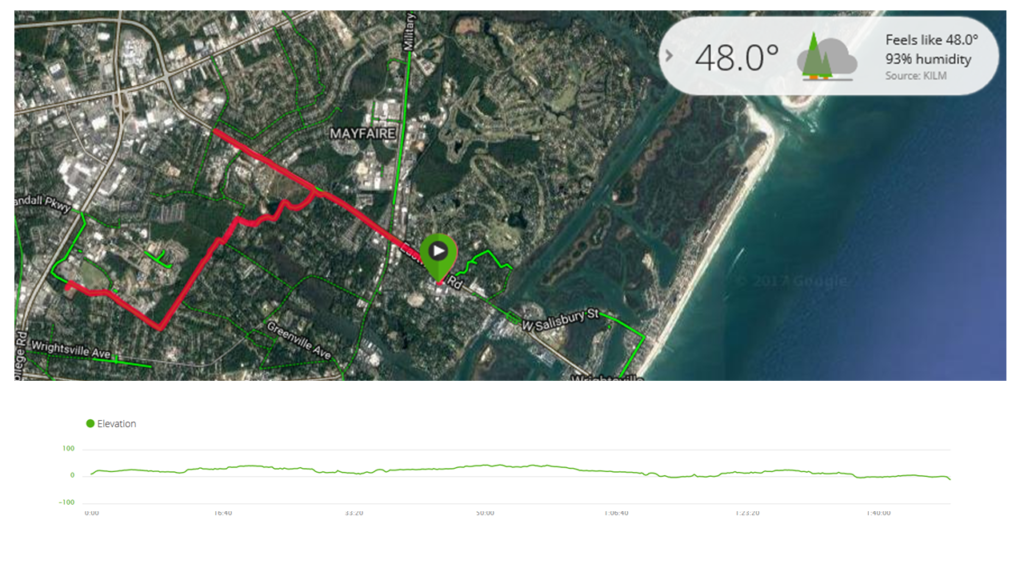 There was another turn around about mile 6.5. As I was approaching the turnaround not far ahead, about 150 meters, the 1:45 pacer. I was close, so I needed to hang in there. That gave me another incentive and air that lasted for another 2 miles, after that I slowed down a bit matching the pace of the runner ahead of me. Still under 9:00 pace, but feeling my stomach kind of full. By this time I am normally ready for my second gel, but this time I knew I could not take it in. My sugars still bouncing on the upper 200s and I still needed to press. Another adjustment of insulin and I hang in there for a little while. Closing on mile 10, I was following these two runners and trying to catch up with them. After I got close, I hang with them for a while. At that stage there were couple runners that passed me fast, they were sprinting with about 3.5 miles to go. Closing to the turn around I saw once again the 1:45 pacer, now about 250 meters ahead of me. With about 3 miles to go, I decided to press on, it was going to be close to being able to beat my personal best, but it was close so I was going to try. I took off my running hat and started to press on. Once I started another runner passed me moving fast, it was the guys earlier, the one that would speed up when I was trying to pass him. I let got about 15 meters in from of me and I matched the pace. He was increasing his speed again and I continue to trail for about a mile. We had about 1.5 miles to go when suddenly he slowed down significantly and I continue to push until the finish line. I PR the race, 1st event of 2015 with a 1:49:17. About one minute better than the fall. It felt good to finish, I walked for a while, grabbed some water, more insulin adjustment and went back to the hotel.

I really going to need to pay more attention to what I eat starting a week or so before the races if I want it to have good sugars to start with and feel good throughout the event.

Venue: Start/finish line and post event location was good! There was lots good food, plenty to drink. Being near a 24hr neighborhood market was very convenient.

Race: Water at the water stations. Carried E-Fuel and E-Gel.