I am Type 1 diabetic runner, this means that I am insulin dependent which I receive in specific doses via an insulin pump. I am not going to cover what diabetes is or the difference between the types and other general stuff here. There are plenty of really good information available, you can take a look in sites like The American Diabetes Association, JDRF (Juvinile Diabetes Research Foundation), WebMD, TuDiabetes, DLife and others. Here I will like talk about how I manage my sugars and diabetes while training, running and racing. For that purpose I have divided the topic in several segments, from basic to some running details.

Most of the time it is easier for me to visualize concepts starting with common analogies. Then build up from the simple to the comprehensive view. That allows me to apply different ways to see things and understand concepts that other wise will seem little bit confusing. As mentioned in the top text, I am not here to explain what diabetes is but, I will need to represent the condition with a simplistic model that will allow me to better explain my approach to running with diabetes. With that said lets begin the journey/example with the following 1st segment.

The starting point is to visualize that a part of your body is like a wooden barrel that is holds liquid. In this visualization the barrel is design to hold this liquid for us. As you can probably guess the liquid is basically the equivalent of the glucose in your body. This, in a nutshell, is a simplistic way of seeing things. The barrel will be holding the liquid to be use when needed. Your body uses the combination of glucose and insulin as a source of energy to feed the brain, muscle and other cells in your body. That usage will deplete the content of the barrel. In our example, this will be represented as an equivalent of a valve, with the insulin acting as the mechanism to control flow out of the valve. This in part will let the glucose out to be use as a fuel by the body.

While Less insulin causes Less flow out the barrel

Pretty easy right? Your pancreas produces the insulin that allows the body to use the glucose for energy, hence depleting the content of liquid in the barrel. If we were able to do a 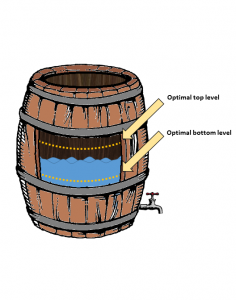 cut out to the side of the barrel, we will be able to see inside the barrel. We should be able to see the level of the liquid inside and the current state. We would like to keep the liquid’s level in the barrel within an optimal range. This range has been set by different studies and experimentation. These pre-determine range value target lines reflects the average healthy range. This range fluctuates from 70-130 mg/dL and varies depending on fasting conditions vs. two hours after eating a meal. In our barrel example lets say that our optimal top range level is no higher than 130 liters and our bottom range level target is no lower than 70 liters. This means that when we open the faucet to let liquid out of the barrel we will like to keep it leveling within those to numbers.

Alright, so far we have the liquid’s level going down, using the a faucet to let the liquid out of the barrel. The equivalent of insulin as a faucet and our liquid being the glucose.

But, we will need to replenish liquid back into the barrel so we do not run out of it either. Lets say now that the way we control the level of the liquid is with food. After the food is processed, the carbs get transformed into glucose. Hence, in our example, for us to be able to fill the barrel back up and get the liquid to the recommended range. There are other fuel storage areas in our body, that affects the level of our liquid. From time to time they will produce extra amounts of glucose in a continuous process to keep us alive. In the morning for some individuals the body will release additional glucose into the bloodstream in preparation for the body to wake up in the morning and ready to use extra energy. Sometime depending of different conditions it might release a little more or less. Although this amount is limited, it will still be enough to raise the level of the liquid in our bar 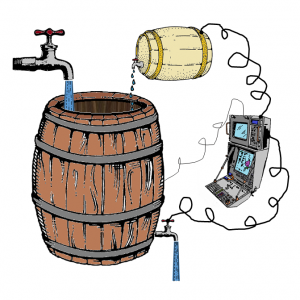 All this sounds little bit confusing but in reality this process is one of the aspects of normal living that we normally take for granted. We are very fortunate that our brain in addition to the other multi-function activities, does all what is necessary to maintain the right level of glucose. Whether we are sleeping, eating, relaxing or even better running, the brain will normally adjust the in flow of insulin to keep the body within the perfect range. Unfortunately sometimes, things do not work the way they are supposed to. For whatever the reason the source of insulin stops producing enough and/or the insulin is not working properly to regulate the flow. In the case of the pancreas not producing enough insulin the levels of glucose will increase quickly in our bodies specially after meals. When the body can’t manage to use the source of insulin effectively cause by the lack of tolerance to the insulin, it will also cause the levels of glucose to rise. In our example the levels will rise well above the healthy level and overflow out of the barrel.

That is not good 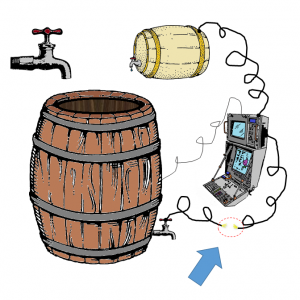 , because imagine all that liquid overflowing out of the barrel causing damage to the other components around the barrel. Sometimes acute damage, like shorting out more other electrical component of our system. (This could be damaging brain cells and other organs affecting our mood and thought process) Or sometimes cause long term damage, like causing rust in other components preventing them to work properly. (Example: long term damage to the kidneys, liver and other organs) This is why is very important for us to keep an eye of what is going on with the level inside the barrel. When working properly the system auto regulates itself maintaining a good healthy balance, but when is not necessary working perfectly, which is the case of diabetes, it might require a little bit of extra help.

Stay tune for part two of our:

Insane Running The Basic of running with diabetes