Today was the third of 13.1 Series. So I get the extra bling for completing 3 13.1 series events. I ran this event last year and it was a fun event. I had similar expectations about the event. Many runners today which is a lot of fun. I believe there were around 1,500 for the half and another 1,000 for the 5k and 10k. Many familiar faces, from previous events and from the running club.

The morning routine as usual, got to the start/finish area with plenty of time. Unfortunately I left my ipod shuffle at home. No problem, I have ran many training runs and events with out music, so no big deal. I set out to do a 1 mile warm up easy run. I hesitated a bit, because it was already feeling warm. You could feel the humidity, so I forced myself to go and do the warm up run and I am glad I did. You see, I realized after the run that the warm up run will not only warm up the muscles in preparation for an event (Doh!) But also will give you clues about the conditions for that day. For example today, as soon as I finish the warm up I was soaked and my body was struggling cooling down. At that moment I knew that this event was not going to be a PR event, I moved to my second two goals, finish around 1:50 and finish under 2:00. I thought that was going to be still reasonable.

Saw my friend Chong before the start, we chatted a bit. He was going to also finish a challenge, the Triple Crown Challenge. Unfortunately for me, one of the qualifying events conflicted with a swimming meet and I was unable to run that event. But again that was ok, I was going for the 3X 13.1 Race series challenge. Similar to Triple Crown, but different events. 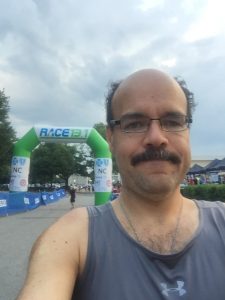 The event started on time and off we went. I started really slow, moved more into the center of the road and started to find a good pace, when I came across with Doug Mackey, another runner from previous events. He was the one that we ended up talking a ton during the Wiston-Salem Half. I was nice to see him again. We hang together for about couple miles. We chatted about previous events and upcoming ones.

Then I pressed on to try to catch up with the 2 hour pacer. Few miles in I passed the pacers and continued. I check my pace and definitely was not PR pace, but still within the 2:50 target. I decided to hold the pace a bit, I was grabbing Gatorade and water at the stations but I was feeling that I was not drinking enough. At this time I also realized that more people started to walk earlier than usual. We were about mile 5. I think the heat and humidity was getting the best out of us. I got to the next water station and decided to do a quick stop at the porta potty. I continued but not pushing the pace, runners are already on their way back when I saw Arvind on the way back and with a solid pace. We high five as we passed each other and continued marching along.

I think that when I stopped to go to the bathroom the 2:00 pacer passed me, because after that when I was getting close to the turn around, 1st I saw the 1:45 pacer, which it was not a problem because that was not my goal. But the as I got closer to the turn around I also saw the 2 hour pass on the way back even before I got to the turn around. I guess I was going much slower that I though. With that in mind and since most likely I am planning to go out to run tomorrow, I slowed down to a comfortable jog and a few walks here and there. It was warm and humid.

Chong caught up with me and we ran together for a few miles. He was doing pretty good. Not to far in front of us we saw a runner going down onto the side grass. Chong pointed him out, I told him that I was going to stop to check. The runner, Ray, was breathing heavy, but he was coherent. I asked him if he needed help. He said “no…   …I want to finish.” I told him “of course we were only about 3 miles away from the finish line.” I stayed with him for a few seconds, when he want it to stand up. I offered my hand, but as he was trying to stand, his legs failed him and he almost fainted. Back to the ground, a few others runners stopped, offered help, water and helped to cool him down. As I was trying to get my phone out, another runner already started to call 911. At this time, Ray was not as coherent as before. He want it to finish he was saying it, I know the feeling. A couple years ago, once I was in similar situation as Ray. In the ground as well and with very low sugars, here is the link to that post about it. I stayed until the 1st medical personnel arrived and decided to continue to finish. Later I checked the results and I did not see his name on the finisher’s list. Next time.

I continued and for the next three miles I chatted with few other runners. About 1/2 mile away from finishing I see a young man, Andrew I think was his name, he was walking some of the downhill. I told him to jog the downhill with me and to finish the event together. He pick up the pace, we tackled the next up hill and ran very strong all the way to the finish. It felt good to pick up the pace to the finish.

My friends from Raleigh Trail Runners (RTR) did great. Three of them finished 1st in their respective age group. That was awesome. I chatted once again with Doug, Chong, Arvind and got to finally meet Chad. We have follow each other on Strava for quite some time and we kept missing each others during events.

but one more half finish and another

Course: Fantastic start/finish area near Northhills area. Great ample road right of the start. Only one choke point turning into the greenway paved path. Some small hills along the middle nothing too challenging. Last 2 miles are basically uphill, you need to have some in reserved to finish strong.  The water station setup and distances were ok good. For a cold day they would of being fine. For a hot, warm and humid event like this one, they could added one or two additional point even with light staff.

T1D: Sugars borderline high at the start. But remained stable during the event.

Fueling: Pre-Race: 1 serving Hot Cereal and Latte. Banana an hour prior the start.

Race: Gatorade and water at the water station. LG Caffeinated gel around mile 7. 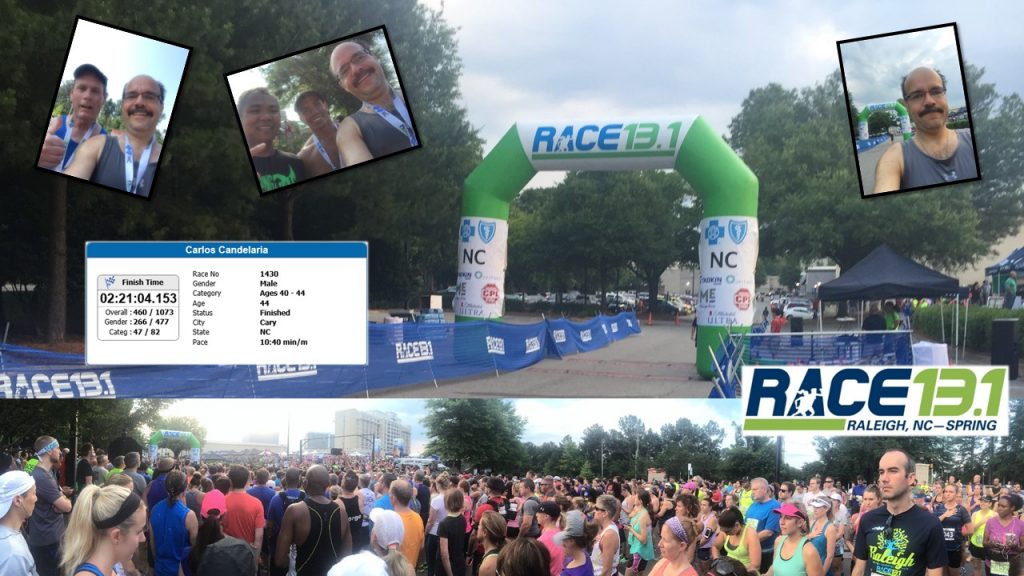