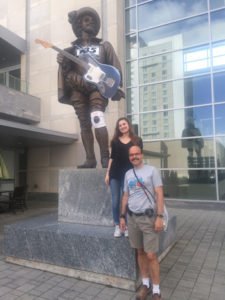 Three years ago the Rock and Roll marathon taught me a lesson about respecting the distance. Twice in a row, I have been able to PR in this event. This year I had been training with a formal plan. For weeks I spend endless hours of training and only missing one workout a Tempo run and another workout that turn out to be too much (A 10 mile Pace run). Also battling a foot issue that started to bug me since my second 21 miler a few weeks ago.  This is also my 1st main event for the season. Yesterday I did the 5k with my daughter, which it was a lot of fun.

Not going to cover the expo or the route in this post. You can see a few comments about the expo from yesterday’s post here. And some course details, review and info here. But I will talk about the weather this year. Compare to the last year, this year was a little bit warmer and humid.  Although warmer compare to last year it was an awesome running weather for an event.

Last year I had a calf injury during the later part of the training. This year was a minor left foot problem with some pain at the bottom near the heel. During yesterday’s run, it gave me some problems but nothing serious to slow me down much. 26.2 miles is not walk in the park. 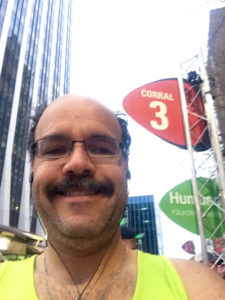 I knew that I needed to be aware of any signs of discomfort if I want it to finish this event. The morning routine, same as my previous event, checked sugars, oatmeal, a latte, quick bathroom stop, drove early to the venue, banana half hour before the start, one more last sugar check and it was within running range. This year the start of the event was different, it was in the same street as many restaurants, cafes, and hotels. I walked towards the Sheraton Hotel in downtown Raleigh and waited there for my friend Roland, he was running the half this year coming from another half a couple weeks ago in London. There was also few other friends from RTR running club, Arvind, Jay, Arun, and others. With about 10 minutes to go, a quick bathroom visit and I made my way to my corral #3. After a few short announcements and off we went.

Miles 1-5 went really well and even though that I was feeling great I forced myself to keep within the planned pace. It felt like easy running with not necessary much effort. Even with the ups and downs, I kept an even controlled pace. Close to mile 2, I used some of the e-fuel and close to mile 5 I took some fueling. I felt good during these miles although the CGMS trending alarm was warning of an upcoming high. The music along the course was great.

Miles 6-10 still under control, holding the pace per plan. The target was to get close to a 3:40 finish. Feeling solid I kept going holding the pace. Around mile 8 there is a split of the half marathons and full. It was then when I realized how many people were running the full compare to the half. I felt a little bit alone and with only a few runners to target a pace. But even with the lack of runners, I held the pace and I was on track.

Miles 11-15 After joining the half marathon again for about a mile, we split again. At mile 14 I was not feeling 100%. Still holding somewhat the target pace, I knew I was slowing down. I know the hills were more pronounced compare to the first portion of the marathon. The CGMS was very sporadic and the readings were jumping with too much of a range to be able to make sense. Unfortunately, I walked a bit during mile 15.

Mile 16-20 There was an aid medical station near mile 16, so I decided to stop now and check. Since I was not carrying a glucose meter with me. To figure out how off the sugars were. Unfortunately at the tent, although they found the needle stick they were unsuccessful finding the meter. After waiting a bit, I decided to continue to push on. After that stop, it got harder to get the pace back to normal the next few mile. I decided to take a caffeinated gel close to mile 17 and also reduce the basal a bit. A PR was out of the question at this time, so I continued, when one of the running club member, Dieter say hello and asked me about how I was doing. I told him, he offered some of the gels he had with him, but I had plenty just in case. I held the pace with him for a bit and while slowing down I encourage him to stay strong. He was doing great and relaxed form. It was also great to see Allyson and Christian running in the greenway portion of the race, it did give me another shot of energy to continue strolling my way towards the finish line.

Miles 21-26.2 I took it easy the last few miles, walking most of the uphills and running the flats and downhills. I started to feel my left foot a little bit more. I started to tell he was there around mile 18 but changed the cadence a bit so I would not stretch my foot too much. The last 3/4 of the event I was feeling much better and increased my pace to finish strong with a nice downhill all the way to the finish. 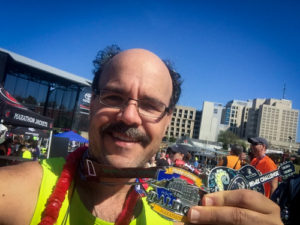 I cracked a smile and finished strong.

I grabbed some water and snacks. Legs were sore but still in good shape. Walked down to the concert area, spend a little time there stretching a bit and talking to a few runners including some from the RTR running club. After that, I grabbed my protein shake when I returned to my car and drove home very tired. Although no PR, there was still much to learn from the training season this year. A few adjustment I am going to need to do in preparation for Chicago’s Marathon later this year. I will take it, extra remix medal, and extra finisher’s jacket.

Venue: At the finish, excellent food, plenty to drink and excellent music.

T1D: Sugars at running range at the start. Trending way up during the event and held there for few miles. Later GCMS started to jump around and the trending alarm was a little confuse. Basal adjustment done around mile 17.

Fueling: Pre-Race: 1 serving Hot Cereal (oatmeal) and Latte. A banana about a half hour before the start.

Race: Alternating water and Gatorade at the water stations. A 1/4 Cliff bar every 4o minutes, 1 gel with caffeine after mile 17. Carrying fluids with me (E-fuel), drinking some between water stations. 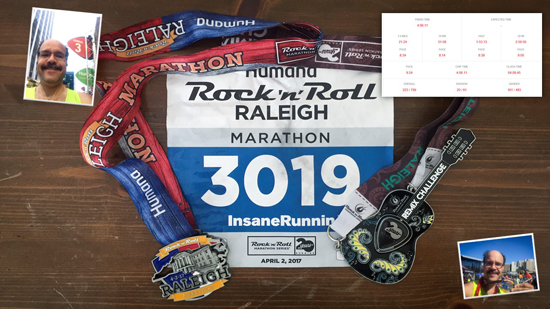