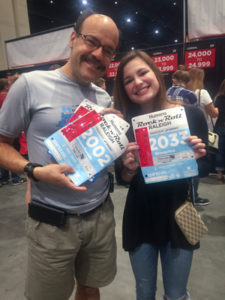 Once again the Raleigh Rock’nRoll series came again this year to Raleigh. Like last year they have the Remix Challenge, complete the 5k on Saturday followed by the Half or Full the next day and earn an extra bling. So, I am doing the Remix again for a pre-run the day before the Marathon. This though I convinced my daughter, Bianca to run the same 5k event with me.

Like the last two years, this event is always a reminder of how easy the wheels can fall off during the big event. I selected the Full to be my main Marathon event for the spring season. For that reason, I skipped the Tobacco Road Marathon this year. Last year I was coming from a calf injury, this year my left foot started to gave me some problems after the second 20 training miler workout 0session. This 5k was a good test for the marathon distance but more about that later.

The Expo was similar to the past couple years. Very decent, lots of vendors, products and goodies. Bianca brought her friend with us to pick up her bib. She had a lot of fun browsing the different booths and even ended up with a box of instant rice from one of the booths. Since we went early on Friday there were not many people when we got there but just before we left it was getting crowded. 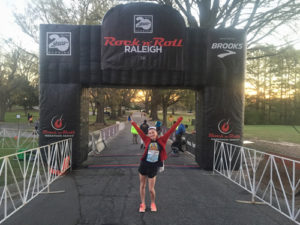 The morning of the event the usual breakfast, Hot cereal (Cream of Wheat), a latte and a banana an hour before the start of the event. Sugars checked before eating and they were on the high end and rising. I do not know but a lot of times when is race time it does that. A quick bathroom visit and we left the house early since the event was about 40 minutes away. It was great temperature, warmer compare to last years.  My daughter was not used to the cold that much, since she is a competitive swimmer, she does not have too many early training runs when is 30, 40 or 50 degrees outside. 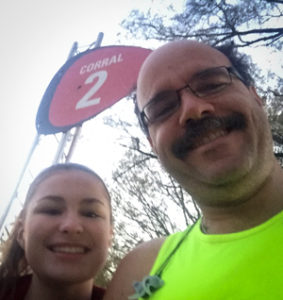 The starting line area was very open and the people were getting ready, stretching, walking and jogging. We waited for a couple of my running friends and after that, I went out for the usual mile warm up run. By the time I was done it was time to walk to the starting line. There were about the same amount of runners compare to last year, at least it seems. My daughter and I were assigned corral two. That was just one corral behind the elites and the second out of 10 corrals. We settle in the back of corral 2, that gave us some room, to slow down a have fun in this event.

After the National Anthem and a few minutes later and off we went. The course was similar than last year, a little by hilly. Nothing too bad but plenty of small ups and downs with a few sharp 90º turns. I started my music and ran close to the turns and tackling each up hill with a steady high cadence. Bianca remained next to me for about half mile as I started to press the pace. There was this other runner that passed me pretty fast and I decided to follow pursuit. Mile 1 came and went fast, I checked my pace and was a little bit slower than PR pace but under 8-minute mile pace. After mile 1, it was a passing game with the runner I was following. I passed him, mostly during the uphills and a few seconds later during the flat and downhill portion he will pass. 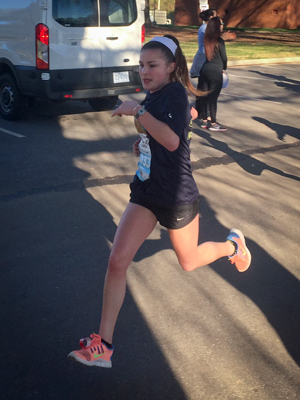 I grabbed some water at the water station even though I did not need it, sip some a discarded the cup. Mile 2 came and I slowed down a bit more, my left foot started to hurt a bit, not bad but just reminding me that I was not completely healed. Next quarter mile was uphill, no problem, I passed the runner again. With a half mile to go, I saw Bianca approaching the last small loop. She looked that she was having fun. The last portion of the event was completely downhill so I pressed on a bit, but I started to laugh when the runner passed me flying towards the finish line. All was good. I finished with 24:45 slower than last year’s finish of 23:38.

After finishing I quickly made my way to the sideline where my daughter was coming down the hill very fast, finishing very strong. She was very happy to complete the 5k and to receive her medal. It is all about the bling. Also the finish line there was my friends from work Alex and Roland, they both did very well. 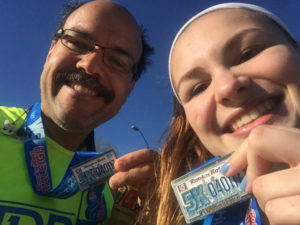 I believe I am ready for tomorrow’s marathon. Foot feeling ok, some pain but it will be fine. Sugars were higher at the end of the event but I was feeling good and looking forward to lower temps (4 degrees lower) for tomorrow. I was really happy that my daughter was able to take some time from her swimming shcedule to join me for this event. It was alot of fun. Now for a foam rolling session, some food and some good old fashion rest.

Course: Starting corrals were better than last year, narrow but sufficient for this type of race. After starting line were ample and nice. The course was a little bit hilly, nothing too challenging but it has frequent ups and downs. Last 1/4 of a mile was mostly downhill.

Venue: At the finish, bananas, snacks, plenty to drink and good music.

Expo: Nice expo at the Raleigh convention center. Many booths and freebies.

Weather: Clear skies, great 54º with just 71% humidity with just a little bit of a breezy

T1D: Sugars were a little bit high but in running range at the start. Remained there throughout the event, started to go up after the event.

Fueling: Pre-Race: 1 serving Cream of Wheat Cereal and Latte. A banana about an hour before the start.

Race: Little bit of water at the water station.