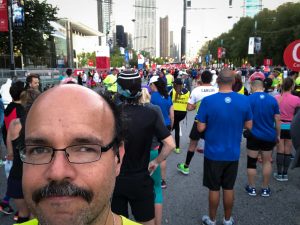 WOW! I am still speechless and amazed when I recall the marathon experience. This Chicago Marathon was my 15th completed marathon and I am glad I did it this way, with so much amazing marathon coordination, plenty of fuel, music and a surreal spectator support.  The early morning started as planned with a light breakfast, grabbed my check-in bag with few items for the post-event just in case I needed them. A banana to eat about an hour prior to the event, a towel, a clean dry shirt and some additional fuel/snacks/carbs all ready for me. My sugars were on target, around 160 and GCMS was reading very close to the meter measurement. Roland and I got to the corral area with plenty of time to walk and look around, so many runners and extremely well-organized event. There was a water station to fill the water bottles, plenty of porta-potties, although the majority had some lines there were a lot of them in different locations. The bag check-in area was easy to find and there were no lines. 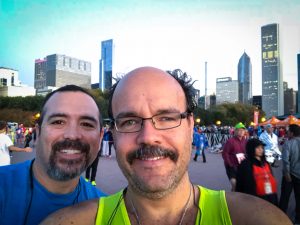 With about 45 minutes to go, I went ahead to line up to corral D in the 1st wave of runners. Did I mention there were a lot of runners? Our wave starting time for the wave was 7:30 AM and the sun was barely out at that time. After a few announcements, a beautiful National Anthem, performed by Melissa Primavera off we went very excited and anxious to see what I could do today.

Miles 1-5: Alright the temperatures at the start were around 57F with a very small breeze blowing. The 1st mile was on target with my original plan, I took it easy to warm up and loosen the legs. There were tons of runners, not necessarily too much room to move around but it was ok. Almost everyone was running about the same pace so not much to worry about going too slow and missing your target. During that 1st stretch of the marathon we quickly encounter the tunnel which it was bad for the GPS, but if you have a pod or a watch that can use your cadence it should not be a problem seeing and keeping track of the pace on your watch. The following miles were on pretty much target, just a tad faster pace, but felt great and also that I could press the pace more, but held a bit because I did not want to burn too early. As soon as we got out of the tunnel area into the city, it was like a crazy moment. The crowds were insanely loud and energetic. It was like being at a championship game and the stadium was filled with only spectators of the underdog winning team. But this time they were cheering for the runners. Miles and miles of spectators of all ages with signs, noisemakers and flags from so many countries, an unbelievable experience. Crossing the 1st bridge, there was a red carpet to facilitate the footing over the grated bridge, I am glad I noticed it early enough to steer that way. Past mile 4 we got to go near the Zoo area, a change in scenery to experience another aspect of the city.

Miles 6-10: The spectacle of noise, music, runners were still amazing. Water stations were so well manned and had plenty enough for all the runners. Tons of empty cups on the ground and I am in the 1st wave of runners, cannot imagine later in the race a carpet of the empty cups that could turn into a slippery situation. There were people handing out tissues and paper towels to dry the face and blow your nose. I needed some. By this time I concentrated on my pace. I zoned out a bit and now the noise from the crowds moved to the background in my mind. I checked my pace and I slowed down a bit to the target pace. I settled there for a few miles while the sun started to completely come out. Not a single cloud in the sky for today’s event and the temperature was already well into the mid-60s about an hour and a half into the event. Still feeling great, I checked my CGMS and although at the very early miles it jumped a bit, now it was stable and within the running target, I continued to hold the pace.

Miles 10-15: The sun is out and pounding, I slowed down a bit more and around mid of mile 12, I started to do some runner’s math. Since I was close to the halfway point, I checked to whether or not I was on target for a PR. By mile 13 though, I needed to hold or perform the same effort and pace I did during the first half of the event to barely make a PR. I knew it was going to be very improbable. The temperature was rising, the sun was out and I was getting more thirsty every mile. It was time to make a decision, could I press on and still maybe make the PR target or just forget about the PR, slow down, do not kill myself and enjoy the event. After couple minutes of thinking about I decided for the later. And it was the right call. At the water station area, I stopped to use the porta-potty and continued enjoying more the crowds and the event but at a slower pace. Miles 14 and 15 were a bit brutal, this because the small sun coverage from the buildings was basically gone and the crowds during these miles were not a vivid and massive as the earlier miles. It was an industrial area, I believe, so it was natural to have thinner crowds. I read about it in a few blogs while doing my research and I was prepared for it. So at that time I finally turned on my music and continued on having fun.

Miles 16-20: Now I am a bit tired, fueling wise I was actually doing great, had an earlier gel between mile 5-6 and I had been drinking a fair amount of Gatorade at the water stations in addition to my E-fuel bottle for in between the water stations. During these portion of the event, they were handing out bananas which it was great. I knew about it beforehand and practiced eating bananas for fueling during some of my long runs to see if it was not going to cause a problem. Around mile 17 they were giving cold sponges to refresh and damp your face. I grabbed a couple and they felt great. Now the crowds were back to substantial spectators and noise. It was so loud and energetic that I could not even hear the music from my mp3 player, so I turned it off. Around mile 19 there were giving away small water bottles. I decided to hold onto the bottle and refilled it with cold water at the water stations. It worked great, I was sipping water every other minute and pouring some over my head. After that I started to run until reaching the water stations, to grabbed a drink and walked for a few minutes. Then I repeated the tactic almost all the way to end final files. It worked for me since even though I was tired, I still had plenty of energy to begin running. There were some runners running pretty well at a faster pace. Some were doing the similar strategy that I was doing. Some others were not having much fun at this time, but you have to admire their desire to continue to the finish. Also, this was when I started to see some casualties on the side of the road, from cramps to exhaustion.

Miles 21-25: During the last few miles there was couple truck with huge fans that were spraying water. The couple occasions that I was able to move into their spray area, was awesome. I could of slow down to cool off more, but I did not, it still felt great after that. The water stations were more frequent during these segment of the route and the crowds were still very loud. I could feel that the end was approaching soon, once we turned into Michigan Ave, I believe. Not much to report during these miles other that even though the sun was still pounding and it felt warm I was still having fun. 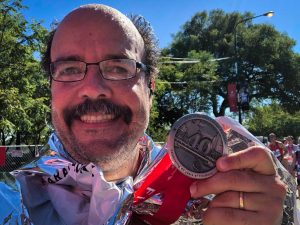 Last mile and .2: Final stretch, I had still energy in me and my leg although a bit tired it was not that bad. It was very exciting to see the 400m left sign and it was a bit uphill to go over the overpass. After reaching the top, you could see the finish line, the sound, music, and celebration. A big smile to finish the event.

After that a few goodies, there was an area that had this cold water showers for the runners. As I got in to cool off a bit, another runner grabbed me in pain. I thought he was joking but apparently, as soon as the cold water hit his legs, it cramped bag. He was in so much pain. I grabbed him and helped him move away from the water and near were the event coordinators were at. In no time some EMT and voluteers grabbed him and got a wheelchair for him. There were other runners in a similar situation. At the end when I was approaching the finish line, two runners were helping another one reach the finish line, while a volunteer was closely following behind with a wheelchair.

In all, even though it was warm and sunny and I was unable to get a PR, it was a great event. The food, water stations, coordination and especially the crowds all were amazing. Very happy that I was able to participate, finish and complete another state and my 15th marathon.

Course: Outstanding start/finish area. Great ample road right of the start. Very flat with few turns. The water stations were awesome and the distance between the was even better. Very scenic. Great route, takes you around some of the nice building and architectural highlights of the city and finishing running along the lakeshore.

T1D: Remained stable during the event.

Race: Gatorade mostly at the water stations. I bottle with E-fuel and two gels 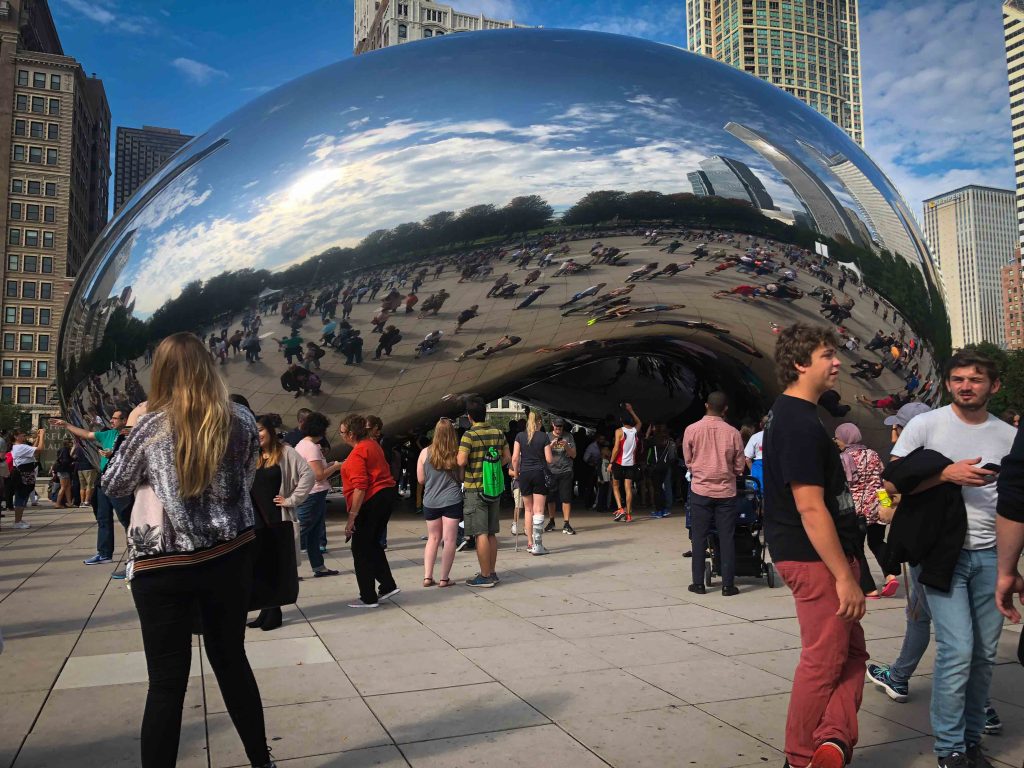