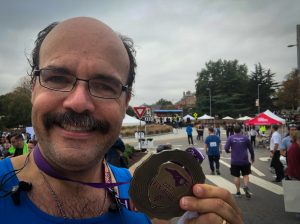 This was a totally a crazy marathon performance compared to my previous years running this event but, I could trade it for nothing.

This year, the Expo was a little bit disappointing. I do not know if it was because of the new location, which had ample space since it moved from its original location to the Convention Center or I went too early in the day. It seemed that there were fewer vendors, less cozy and kind of bland expo this year. Never the less it was well organized and the few vendors and exhibits were good to look at.

The morning of the event the usual, sugars levels were hovering around 187 which it was great for a run/event. At the event, I was able to meet with few of my running friends from RTR running club including Roland. After the Chicago Marathon about a month ago, he was going to run the half this time. We talked for a while and approached the corrals. I proceed to located between the 3:45 to 4:00 pacers. The thought process was to start slow and move my way to the 3:45 pacer about ¾ of the way. After the National Anthem and couple announcement, we left the NC State Bell Tower on our way to finish the Marathon.

Mile 1-6: Early in the event, all is well, feeling well and although I was running more by effort than anything else the miles splits were well in target considering the up and downs and rolling hills of the route. At the 1st water I took some of the drink and it did not taste that great. But since at the Chicago Marathon the fueling plan worked great I decided to grab the same drink at the second station and use the energy drink I was carrying during mid miles. Around mile three there was a runner next to me, Bruce from Ohio, that had complete over 40 marathons and was trying to see if he could BQ during in this one. We chatted for a while and he slowed down a bit, since he was pushing the pace a bit ahead of his plan. As I continued, pass the second station and make my way to the mile marker 6, my stomach was not feeling that well. After mile five, I had to force a gel in, even as stomach was not totally ready for it. I knew I have to do that in order to get some calories in and not suffer in the latter parts of the marathon.

Mile 7-13: Other than the stomach issue, I was ok. Sugars were on the high side but stable and within range. I did a bolus adjustment when I took my second gel. At this time I am only taking water at the stations and have some E-Fuel that I carrying with me. Stomach not at 100% but feeling better. Still running ok, close to a decent pace, found a zone that kept me going. Close to mile 7 I saw Tam and her kids waiting for Chung who was running the half. Later I encounter some of the RTR members, Chuck and Cande plus others were there cheering for all the runners. It was so great to see them.

Mile 13-19: Not much to report during these miles. The runners around me thinned out a bit since the 10k and Half marathoners already left to a slightly different route back to their finish line. Now we are just marathon and relay participants. Most of the initial 13 to 15 miles are downhill but I cannot seem to catch the necessary energy and momentum to sustain the pace. The Zone I was in before during mile 8 to 11 was far gone. Half waytowards the turn around, Bruce passed me and shouted some words of encouragement. As he returned past the turnaround we crossed paths again and I ask him to hang around and that he was doing great. He was just 1 or 2 minutes behind the 4:00 pacers and with a big uphill coming up he needed the extra energy to meet his BQ goal. 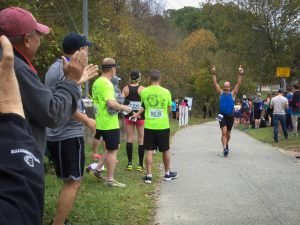 Mile 20: At this time I was way more tired than I want it to be. There been some walking already but as I turned the corner towards the last relay exchange I saw something huge!!!!! It was my family from Puerto Rico. My brother with his family, my sister and her husband (Luis, who finished the half earlier in the day) and with them my uncle and mom. It was so great to see them, smile at them and give them super big high fives. That experience gave me a really much needed surge of energy. 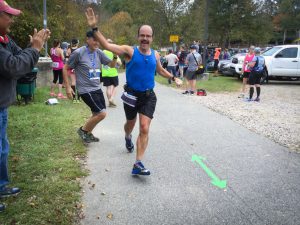 Mile 21-26.2: Not much happened during these miles, just a mix of running and walking. There is a long uphill to mile 24 marker and then it is easy towards the finish line. I was feeling ok and after the surge of energy of mile 20, even though I was doing just ok, I kept remembering that this is nothing, compared to the many nights and days without running water or electricity that my family from Puerto Rico recently experienced until they were able to come to North Carolina. Waking up every day to see destruction and not being able to feel normal. The long, long lines of waiting for everything, most of those lines more time consuming than the time I was spending running 26.2 miles plus some change. That kept me going, because of feeling just ok, was much better than what many people are going thru still today.

I finished, no PR, no big celebrations and glad that my legs were feeling ok. 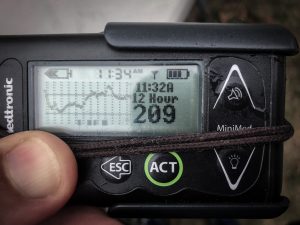 I went to the medical station to have a glucose reading taken and their meter registered 115 vs. the 209 my CGMS was displaying. At least I did not do the jump around of the reading that has done in previous long events. I walked towards the parking lot, happy to complete another marathon and already thinking about my next event in couple weeks and the things I need to do to prepare. Also I was wondering how Bruce did. Later I checked the results and he finished in 4:15 and 3rd on his age group., that was awesome. Luis and Roland finished their event in excellent times. Dieter and Brian from RTR did really good too.

I am learning a lot during these events and I believe I will still need to adjust or approach training differently if I want to improve my times.

Course: Great start/finish area. Great ample road right of the start. The water stations were well stocked and the distance between them were pretty good. Very scenic but very hilly, specially comming back from mile 20.

T1D: Remained stable during on the high side during the event.

Race: Vital Amino at some of the water station but mostly water after stomach issues. A bottle with E-fuel and two gels.