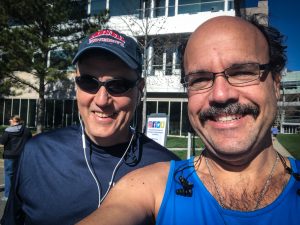 Another year, another Cisco 5k tradition. Last Thursday was the Cisco RTP 5k. Similar to last year the event landed after the City of Oak Marathon. So I was a little bit tired recovering from Chicago and Raleigh marathons as well as keeping the daily running streak alive. I thought about taking it easy, but I this year I have not gotten any PRs, so I had to give it a try. The event started late, at 11:00 AM, much later than the usual events I participate in. Same routine in the morning but a little bit later time. Got to the event area with plenty time to relax, talk to few friends, met with Luis and do a 1-mile warm-up run with some speed play, some butt kicks and high knees and minimal stretching. The whole field of runners was excited as well wearing their school colors. Similar to the previous year, it was the theme for this event.

The temperature was around 54º, similar to last year, but the humidity was a tad on the high side with a 67% compared to 36% of humidity of last year. Just prior to the start of the event I drank some water and lined up close to the front. All went by very fast, mile 1, 2 & 3 and I was done. I went a little bit too fast, not too much but I notice a bit of struggle to hold pace during the last 3/4 of the event. On the way in and back I grabbed some water, but just a bit of it. It worked all the time to slowly pass runners. Stil, in the end, an average pace of 7:43 and end time of 24:01, about 50 seconds of a PR. Regardless I was extremely happy with today’s performance, happy to see I can still hit sub 8:00 miles. 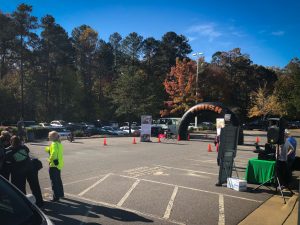 After a one mile warm down, I spend some time around to talk to a few friends and runners that were in the finish area. Another great day to run.

T1D: Sugars within running range at start. Remained steady and trended all the way.