Today I completed one more Marathon distance event. What makes this one a little bit more special than other ones is that 5 years ago I ran this event as my 1st Full Marathon event. Today, I ran the event again but this time I volunteered as a Pacer for the 4:25 finish pace group.

“A pace team is a group of runners led by an experienced leader who runs together in the marathon. The pacer runner runs a steady pace and keeps track of that pace so that the group can achieve their goal of finishing the marathon at a particular time.”

Crazy, right? A few weeks ago I saw the calling for volunteers to pace the Marathon. I was planning to run the event, although I was planning to run under 4:00 target, I took a look at the pacers they needed and saw that they were still looking for the 4:25 finish time group. Since I have never Pace a group before, nervously I decided to 1st check how many marathons I have completed under that time, just to make sure that my spontaneous brain does not get in the way to the more logical and realistic one. 2nd, After doing that and feeling more confident that I can help lead that group I signed up to be a pacer. But more awesome and important that another beautiful medal was earning a Pacer shirt.

But, why not start with a half marathon pacer instead of the full?

Because I am insane

I went out that weekend to practice the pace, around 10:00 min/mile pace and I got stressed out because I was 45, 35, 30, 25 seconds faster per mile than the target in almost every single mile. It might not sound like a big deal, but even running 10 seconds ahead of your target can cause problems for a running especially in the later parts of a long distance event. I got very tense and felt then struggle to keep running the distance I had planned for that weekend. As I reflected on that run, I realized that I needed to use the mile markers (1/4 mile markers) at the trail more efficiently. I added couple new tracking pace views in my Garmin to help me better with shifting gears/pace at a more controlled rate.

The next couple long runs were much better, I reduced the variance significantly, and the overall average was very close to 9:55. Even a few selected shorter runs were very successful at keeping the steady target pace. I was feeling much much better that, I was not going to let down the group of runners. Even if there were not many runners around me, I knew that sometimes runners (Like me) use the pacers as a target to reach, stay, pass or simply use them to vault them to a faster target finish. All is good.

The Expo was really nice and again a decent size. Like last year the vendors were providing advice, freebies, and goodies, from shoes, running equipment to beer and bread. The Tuna challenge event had a booth there again, I always want it to do that relay, but like the past few years, I have conflict events that are preventing me to run it, maybe next year.

After a well rested Saturday morning and night, Sunday morning the usual for an event, hot cereal with some nuts, latte and a banana for about 30 minutes prior to the start. I checked my sugars are they were within the running range at 160and holding steady. I bolus for the food and minor adjustment. The temperature that morning felt great, with overcast skies, 43 degrees but even with the high humidity. 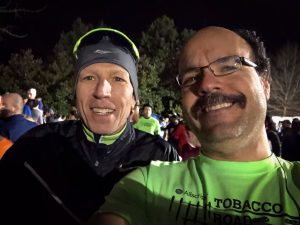 I met with a few of my friends some doing the half other doing the full. Met also with a few of the guys from the Raleigh Trail Runners (RTR) before meeting with all the pacers for final instructions. I checked my sugars one more time before turning the drop bag, they were good to go. Meet with the pacers and the other 4:25 volunteer, a super experience runner that was a friend of a friend of mine which ran the Derby 50k last November, BD Schler. We got to continue our conversation from where we left off. It was great.

Near the start line, we lined up in between the other pacers, answered a few questions from other runners about the strategy we were going to follow and after a few announcements and the National Anthem off we went.

Mile 1-3: These first miles were good miles, we started a bit slow during the 1st mile and up the pace to close and settled to a 9:45 min/mile for that third mile. A bit ahead of the 10:06 target but everyone looked that they were ok with it. I got the chance to talk to many runners around. At this time both the half and the full runners were running together. A bit crowded but at the pace, we were running it was great. At the entrance to the trail, the half turned left and we turned right.

Miles 4-8: Still overcast and a little bit of a breeze. We continue with no problem or issues. I grabbed some water at the stations. My CGMS sounded an up trend alarm, I looked and it seemed that they were trending up. Not too fast but I needed to pay attention. So far feeling great. As we were closer to the turn around we can see the other runners that were ahead of us, including the other pacers. Great camaraderie, lots of supporting work and encouragement for the pacing groups and all the runners.

Miles 8-14: Steady miles at this time, very close to a 10:00 pace. We continued to talk to other runners around us. We see familiar faces that are still heading toward the turnaround. We crossed the half marathon mark and we were about a minute or so ahead. That was ok since we knew coming back from the next turnaround was going to be difficult and if needed we could slow down a bit.

Miles 15-19: Heading towards the next turnaround same steady pace. Sugars now are acting up a bit, they were at very high levels. I did an adjustment to stop the trending and at least have it go down a bit, was feeling it in the legs but no time to slow down or taking a break. There were lots of shoutouts to our group and from our group to other runners. Few runners were already struggling with the distance, but the ones that stayed with us were doing great.

Miles 20-23: Here we slowed down a bit, even a couple 10:30 miles, but all is good and our group was in good spirits. We were trying to pick up a few runners with us, encouraging them to either keep us with us or to start running a for bit. I took the caffeinated gel I normally do in the later parts of the events and a bolus to cover for the gel and also for my sugar reading since the sugars were a bit high. 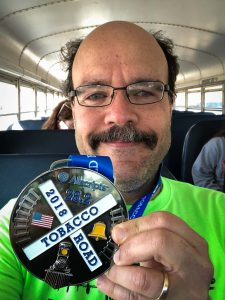 Miles 24-26.2 (Finish):  Final stretch, I knew we were going to deliver the group at the right time. A few of them feeling stronger, went ahead and pressed on the pace. Including an entrepreneurial runner that created her own brand of running attire, GypsyRunner. She was running her 97th Full Marathon and she was having a blast. Another awesome runner, Dave Cockman was completing his 100th Marathon and finished with us. It was amazing to get and see all these runners complete their goals and sometimes their dreams. With about a mile or so to go, we encounter a few great runners that needed just a little bit of motivation, some did run with us, some put some effort and started to get their legs moving. Closer to the finish line, there was another runner that I believe almost gave up running, BD and I provided a final word of encouragement and stayed with her for a little bit to make sure that she was going to finish and finish strong she did.

There are many more stories but I am making this post long already. What an amazing adventure. Great job by Rebecca who organized the pacers and logistics. Brian Eller did a fantastic race improving year after year, his video prep review for the race can be found here. Also the outstanding conversations about food, races events, adventures, tips, advice and the great company of all the participants, I hope the runners that counted in our pacing strategy were able to benefit from it. I had a blast and definitely will do it again. BD and I were able to pace and leading the pacing group to finish with a least a time of 4:24:56. Perfect timing… I think.

Course: Great ample road right of the start, narrowing a bit at the entrance of the trail close to mile 3. With the exception of couple small hills during miles 1-2 and 25-26 the course is mostly flat with long rolling hills.

Expo: Like previous years a very nice expo at the conference room at a near by hotel, with many booths and freebies.

Weather: Overcast skies most the time, great 43º with just 87% humidity.

T1D: Sugars were good at the start, mid eventthey trended upwards to unconfortables levels. Did some bolus adjustmets to control it better during the event.

Fueling: Pre-Race: 1 serving Hot Cereal and Latte. A banana about an hour before start.