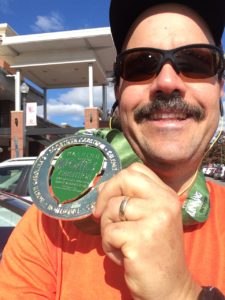 This is the second time doing this Full Marathon and my third time running this event. In preparation for this marathon, I completed all my 10 Yassos at 8:00 minute mile pace or better during the past few weeks of training. The weekend before I did the Hollowed Half for the triple crown a great event to sustain the pace for long time and also did a PR on my Cisco 5K event. The 5k was the last and fast run four days prior this event. Diet wise, I have been watching the carbs intake, specially in the morning. Alternating days of Cream of Wheat and Oatmeal with a medium size latte. Dinner on Friday, some Pasta and Saturday some bread and toast.

The event on Sunday, I was up by 4:30AM, had my oatmeal and coffee but brought the banana with me. Sugars were good, within good range for running. It was a chilly morning with some wind. My original plan was to take my jacket off and put it in the check bag and use a trash bag as a poncho until I warm up during the race. Fuel wise same as training runs and previous events, one gel every 42-43 minutes. But this time instead of just one caffeinated gel at the last intake, I decided to do the one half way point and another one at last one. The reasoning was to get at least some caffeine for extra jolt/energy close to mid point of the race.

I drove to the event, parked and walked about 1/2 mile to the starting line. At this time the wind was blowing and is was cold. I revised the decision of giving up on the jacket and decided to keep it on and if it got hot to tight it on my waist. At the starting corral (There was only one) I decided to start with the 4:30 pacers and work my way toward the 4:00 pacer. My main goal was to do better than 4:15 and as close as possible to 4:00. The alternate goal was to finish under 4:30. Either way it both A & B goals were putting me in target for a PR. After few announcements, the event started on time and off we went, both the Full and Half runners.

First couple miles were easy miles, but a bit crowed. I try to take the outside even tho I might not be able to cut the corners close like I like to do on races. By mile three I am getting warm and realize that I should of followed the original plan of the trash bag. I unzip my jacket and tight it around my waist and continue.

1st fueling gel on time and at the first couple water stations I use my water bottle instead. I was feeling good and strong, with some usual initial soreness and stiff legs of the first miles but was warming up but and able to quickly find a good steady pace. Between miles 4-5 it got crowed again with the additional runners from the 10k that joined us for their 2-3 mile marker. It was hard to concentrate on not to over react and speed up to match their pace. Since it was hard to see who was running what event, some 10k were going fast and that can influence you to try to match their pace. I did my best to stay calm, not to worry and stick to the comfortable pace that I was in. The following 3 miles were crazy, hilly, but good solid miles.

Once we went to the stretch for the 10K finish, we were again just a group of runners doing the Full and the Half. I stopped at the porta-potty for a quick stop, not that I really needed it, but seems like a good idea and it was, because after that I was feeling even better. After that again I started to see a few of the relay people passing you since they just exchanged runners at the 10k finish area. Last year I tried to keep up with some of the fresh legs of the relay around this time, and I knew that I could hold my own for the next 6-7 miles. But this marathon is for the long run, not just 6-7 miles, I force myself to once again remain calm, to push just a little bit but not to compete with the fresh legs out there. The CGMS sensor still not reading right, but got to fuel per plan and did a 25% bolus adjustment this time, based just from the way I was feeling.

Around mile 11, there was the slip of the half and full. Not many full marathon runners with me now, which is good and bad, because you feel like you were running by yourself once in a while. Memories of the first time I did this event (The half) an how tired I was at this point and how I saw the runners from the full going a different way. At that time even though I was tired I want it to be one of those turnging to do the full. Last year it felt good to be one of those, this year I was feeling even better, stronger and fresher at this point so I cracked a smile and continue to check my form, cadence and sugars.

The downhill portion was next for couple miles and then virtually flat for another 2 until the turn around. I knew I was heading fast (at least faster than the 4:30 pacer, but have not seen the 4:15 pacer and I do not know if I passed it. My GPS watch was saying I was running closer to the 4:00 mark but I have not seen that pacer either. But at last, I saw a pacer coming my way and it was indeed the 4:00 pacer, I made notice to the area we crossed pass each other and continue ahead and to my fortune the turn around was not that far away.

I was just about 5 minutes behind the pacer and I knew that I started behind at least a minute or so. That made me feel great and with renew confidence. On the way back I pressed a little bit and about mile 18-19 I decided to do a quick stop at the medical station to check my sugars, still according to the sensor I should not been able to even be walking, but to my surprise the sugars were in better shape than I thought it were, around 155. That put once again another smile and another set of energy. Quickly I took my second to last gel (Caffeinated gel) and started the long trail up-hill. It was slightly up hill at first, but then about a mile of a good hill. I passed a few areas I knew last year I had to walk but not by choice.

The first steep hill came about, and although I knew I could complete it, I also knew that it was going to take too much of me. I decided to walk a little bit of it, to be able to start and continue running after reaching the crest, which I did. Next big hill came about, I slowed down a bit and again decided to walk a little bit of it. After that is was just a rolling hill in which I was able to pick up the pace and continue on. At mile 23, I checked my time and I was doing great, I did a self check again, running form, cadence, breathing and all looked great. I started to pick up pace once again. I also realized how close I was to the 4:00 mark finish, but I also realized that being just 3 minutes off, it meant that I had to run the last three miles a minute faster of the pace I was averaging, something that I have not done this late in the game. So a 4:00 was out but with the confidence that I will finish well ahead of the 4:15 and very close to the 4:00, I pick up the pace just slightly to a pace that I was able to sustain for the remainder of the run.

Super great race, temp, preparation, fueling strategy, just slightly windy at the beginning but other than that extremely happy with the performance and results.

Course: Great ample road right of the start. Both Half and Full start at the time, expect some weaving between runners for the first couple miles. Excellent water station setup and distances. Pretty well staffed too.

Venue: Start/finish line with bag check. At finish, the post event was GREAT! Great music and there was lots good food, plenty to drink, even a Food Truck Rodeo area and beer.

Expo: Expo was much better this year, it had more booths and a larger area. Good goodies and great info on products and services.

T1D: Sugars with in running range at start. CGMS provided wrong measurement during the events. Adjustments done after stopping at medical station.

Race: Water and energy drink at the water station. Carried E-Fuel, drank most after mile 14.