Today I am getting closer to the 30th Half Marathon. With this being the 29th since I started running. This one was part of the season pass of the Race13.1, getting to use the pass as much as possible has been one of the goals this year. Also since next weekend I have the full marathon that I have been training for, this one is a “to finish” event. As usual for a Race13.1 event, the race coordinators had a video of the route in their site, which is very nice for the runners to have a preview as for what is to come. In addition to the clear route map with a nice elevation chart.

My only main concern about this route was near mile 8 with a short (~.25 miles) uphill with a very steep incline. Most of my training have been done at the American Tobacco Trail which is very flat with some rolling hills, so I was a little bit concern about how I was going to tackle this one. Other than that, the long hills does not bother me much.

I planned to drive to this event which is about 1:40 minutes of driving. I woke up about 3:00AM and started to get ready. The usual routine, oatmeal and a latte for breakfast. Sugars were well within running range and the weather it seem that is was going to cooperate 61º with somewhat humidity in the 74%. (I prefer lower humidity but at least it is cool)

Drove in without any problems, walked to the start/finish area to pick the bib and shirt up. It was about a quarter mile walk there, not bad, but it is still pitch black as it was still around 5:45AM when I arrived and sunrise was not until close to 7:00AM. Back to the parking area and with about an hour to go, ate the banana, made the adjustment to the pump and head back to the start/finish. There I met another runner that also been in many Race13.1 races, we recognize each other and talked for a while about the previous races and a few other that he completed this year. He mentioned that his goal was to run at least 12 Half Marathons this year in addition to the already completed full marathons. Time flew fast while engaging in conversation and did not realized how close to the start time it was. I had to rush for a quick stop at the porta potty and then do a warm up. I was only able to run about 1/2 mile and not too well. Walking toward the start line and with only a minute or so to spare, they released us after the countdown.

The race started ok, the route was beautiful with all the trees fall colors and the leaves falling all around. But the 1st quarter mile or so of the event was very narrow and was unable to find the rhythm. After that it seems that the constant change of the hills was making it very difficult for me to find a good steady pace. When I felt like it was almost there, a change in slope caused to start finding the pace again. The clouds held and the temperature was great. After a few miles of struggling with pace I came the realization that I was going too fast for what I planned to do today, which it was just to finish under 2:00 hours. After the mile 4 vibrated in my Garmin I did not see the mile maker until much much later. For a while I thought perhaps that was for the 10K event, as they were going to start 15 minutes after the half. We continue the path, trying to take advantage of the turns, passing a few runners here and there and sticking with some of them for a while. At mile six I check my watch and it said 6.5 miles. That was strange, how off can I be? I remember an email about some changes to the route due to some construction, so I assumed that the sign were in the wrong spot due to the changes. A few runners started asking each other the reading of their GPS watches. We were all about the same, so we could not trust the mile markers.

Mile 8 came and as I mentioned earlier, I was expecting the steep hill but no hill at this time. There were some challenging ones just before but not that bad. Although I never found a decent pace, I was doing ok at this time. So I thought I was in good state even with the erratic pace to be close to my PR. Then the 1st turn around area came, there was a banner on the side of this 4 lane road also you could see some patrols about a quarter mile further. Everyone was running until the end of the street where the police were stopping the traffic. So I did the same, now after the fact, I should have not gone all the way there. The unmanned banner marked the turn around and most runners missed it adding about a quarter mile or so of extra distance.

About mile 8.75 the hill showed up. I decided to tackle it easy with short quick steps, that seemed to work for a little bit. Then I slowed down some, until I walked. I did not want it to walk, because I know that after I start walking, there is going to be more walking later. At the crest of the hill, I went again and started running, tackled another hill with 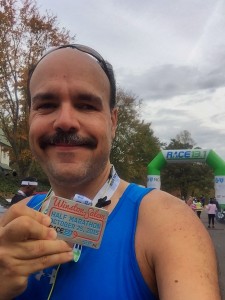 no problem and on the way back I was doing ok, again. But the constant up and down got me and I walked some more. I knew that I was going to finish 13.1 under 2 hours, but looking at the miler makers I was having some doubts about the race time and distance. Sugars were running a tad high, so I did an adjustment for the last 3 miles of the event. Whit the last mile of the race on a downhill slope, I decided to speed up and finish strong. Finishing 13.85 miles on 2:02, not great, but I take it.

Course: The scenery is great, with the fall colors in full transition. It was more hilly than expected. There is constant change in slope, with the only steady long portion of about a mile uphill but not too steep around mile 6 and same going back between mile 12-13. Also, I do not know if it was the late course changes due to construction, but the mile markers were off by about .6 of a mile. The course registered in my Garmin 13.85 miles. Not all water station were manned to hand out the water, but water and Gatorade was available and easy to grab from the tables.

Expo: Did not pick my bib the previous day. No Expo

T1D: Sugars with in mid-running range at start. They trended upward barley out of the running range limit. Adjustment done to stabilize since they were still trending up about mile 9-10.

Race: Water at the water stations, with the exception of the last two which I took Gatorade and Water. 1 LG caffeinated gel around 40 minutes 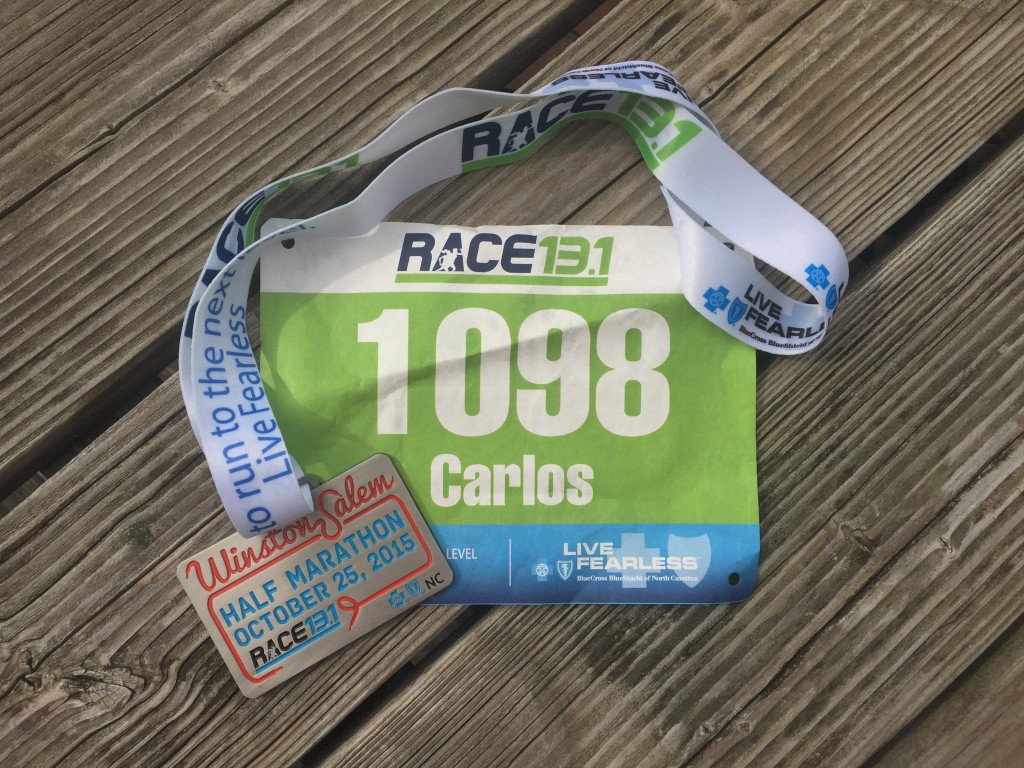