Today I completed my 10th Marathon and it was great. This was also the third time running the City of Oaks Full Marathon, so I am very familiar with the route. For this event, I trained with a combination of back to back long runs over the weekends and Yasso’s for speed work during the week. The Saturday’s long runs are around 8-13 miles depending on the Sunday workout. The Sunday, second long runs went from up to 27, then 20, 16, 13 taper weekly long run and although slow pace, they were solid but mostly on a very flat trail.

The nights prior to the Marathon were solid nights and well rested nights. I watch closely the diet for the last couple weeks more closely, making the necessary adjustments along the way. The runs the week of the Marathon were only 3 milers, with the exception of Thursday which was the Cisco 5k event that included a warm-up and warm down miles. Saturday’s 3 miler was at a super easy comfortable pace. I was ready for this event.

For fueling during the event I got my E-Fuel mix and 5 Gels, plus an extra one for just in case. (1 E-Gel, 2 LG with Caffeine, 2 Accel, 1 Extra Accel) The current plan was to drink the E-Fuel along the way when needed and the gels about every 40 minutes. Not carrying my meter during the event since I have my CGMS.

The night before the race (Halloween Night) I had a low sugar at night which forced me to wake up at midnight to eat some cereal. I input half the normal bolus adjustment to be delivered in the span of an hour. At 4:30 AM, woke up to get ready for the race. (Fortunately it is daylight saving day, so it was an extra hour of sleep) For breakfast, I had the usual one serving of oatmeal, a Latte and a Banana to take with me to eat about an hour to the event. Check my sugars before I leave and they were perfect.

Got to the area early and as I was getting ready to leave the parking area I checked once again my sugars, they were within range but trending up. While I was eating the banana, I made the necessary bolus adjustments. A quick walk early to the start area to talk to a few runners and friends, it was nice to see some familiar faces. It was an overcast day with the temperature hovering around 55º with 94% humidity. The worry was that there was the possibility of rain coming up later that day.  A quick stop at the porta potty some walk around the area to relax and lined up behind the 4:00 pacer group. I check my sensor and it was on the high side but stable so no adjustment needed at this time. It started to sprinkle a little, so I decided with the last couple minutes left to put my pump in a zip-lock bag, just in case we get some heavy rain. And off we go.

It was great, during the first few files you get to see the sea of runners in front of you. I started to weave between runners a little bit as everyone is trying to find their pace and comfort zone. The mix of Full, Relay, Half and 10K runners makes this run very exciting. I stopped at mile 2 water station because I saw the porta potties were empty, I took the opportunity early on to make sure the rest of the race I was going to be ok. The good thing about the stop was that it was quick and I was able to find a really good comfort steady pace very early in the event after that stop. I had my music with me, so for the next 8 miles I kept repeating the same 5 songs. During that time I was feeling great, not pushing it hard and just running by feel. I check couple time to see if I was at least on target I needed to be ahead of a 8:57 pace to beat by PR from earlier this year and I was. At mile 6 or so this guy comes from the left side jumping and screaming at me and I was WTF!!! I started laughing; it was Choung a friend of mine that was spectating waiting for his wife, who was also running the Marathon. I quickly yell back at him, gave him high 5s and off I went. I was awesome to see him there, it provided with extra energy. At the relay exchange I was looking for another friend from work who was also waiting for his wife to take off with the relay, but probably I missed him as I passed by.

The fueling at 40min and 80mins went ok. Not using much of the E-fuel I was carrying at this time, but the sugars rem 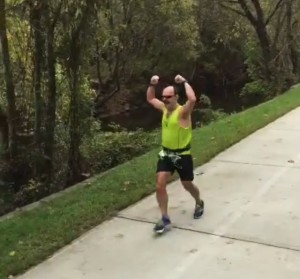 ained high and trending up, to the point that they were well into the yellow running zone. At the fuel times I adjusted as I usually do with some extra to cover for the trend. Both refuel were at this state, I was feeling really good, good pace, good breathing, legs were good and solid. I did not want to adjust much and have a repeat of the 2014 Rock and Roll Marathon.

From mile 9 and on I let the music flow and the miles pass. Fuel at 120mins was the caffeinated gel. Around mile ten I saw a guy running in a red costume, as I got closer I saw the antennas, could it be? LOL, he was dressed as one of my favorites childhood TV comics super heroes, El Chapulin Colorado. I shout “No contanban con my astucia” one of the saying of the Chapulin. We laugh and continue to run. Further ahead I saw another runner from last week’s Winston-Salem half. I asked about how did it go and chatted about the screw up with the distance. Wished each other good luck and continued as well.

I am past the half point and doing great but feeling little bit warm. Next couple miles I am going downhill then a few more flat. As I was getting close to the turnaround I saw the 4:30 pacer, I knew I was about 4 minutes or so to the turnaround. I started to do some mental math and checked my pace. I knew I was not going to caught up with them and I was well ahead for a PR, but perhaps I could push to finish under 3:50. 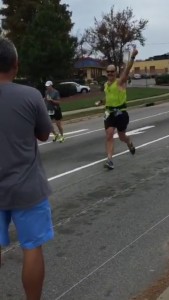 After the turnaround I was able to see more of the other runners passing by. A few minutes later the 4:00 pacer pass on its way to the turnaround. Did some more timing pace math and I was almost convinced that it was possible. A few minutes later I see Tam, Choung’s wife. At passing we shout to each other a quick high 5 and continue. She was running strong and steady. A couple miles later, Choung was there with the kids again, it was great to see him. His daughter took some pictures as I was passing by. Thank you so much, I really enjoyed them.

At the water station near mile 17 I decided to take a quick walk break, the down hills that I encounter from 11.5 to 16 they needed to be covered on the way back. I was going to not worry about whether or not I walk as long as I had enough energy to finish strong. So the plan was, if I had to walk an uphill, I will start early, but run at the crest and onward, even if it was just for 50 meters to the next uphill.

The sugars were now on the red running zone. Not good, but I was not feeling it, legs were not burning, other than the tiredness from running. Before I was going to do another adjustment, I decided to keep running until the med station and have them check my sugars. The station came at mile 22 and they were good and still within the running range. I proceed to fuel and adjust just for the fuel.

During the uphills it got tough but again, jogging a little bit of them and walking just before I felt I was getting into that exertion zone that can drain your energy. I see many other runners walking and a few others jogging the uphill. I am doing some more math during this time, it is possible that even if I average 10:00 mile I can still make it under 3:50.

At mile maker 25, Choung once again providing support to the runners another shout and I pressed on all the way to the end. I was able to run a great strong last mile with a great finish. 3:48:12 official chip time for a completion of my 10th Marathon and a new PR. 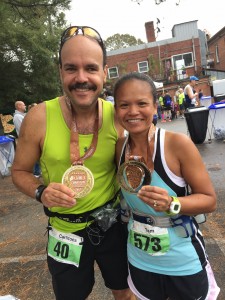 I waited a little bit to cheer for Tam as I knew she was not far behind and running strong. She finished also with a PR, it was awesome. I talked to her and her family for a while at the finish line area. There were lots of runners, relay and families cheering for everyone around the finish area. I even saw El Chapulin Colorado once again running towards the finish line. “No contanban con mi astucia”

Course: Great ample road right of the start. Still expect some weaving between runners as the Full, Relay, Half and 10K starts at the same time. Excellent water station setup and distances. Pretty well staffed too.

Venue: Start/finish line with bag check. At finish, good food, plenty to drink and a area for beer.

T1D: Sugars with in running range at start. Went all the way up to red zone. Adjustments done at fueling and then check sugars at aid station.

Race: Water at the water station. Carried E-Fuel, drank most after mile 17.

Post: Protein Shake and a nut bar with in an hour of the event. Normal lunch after. 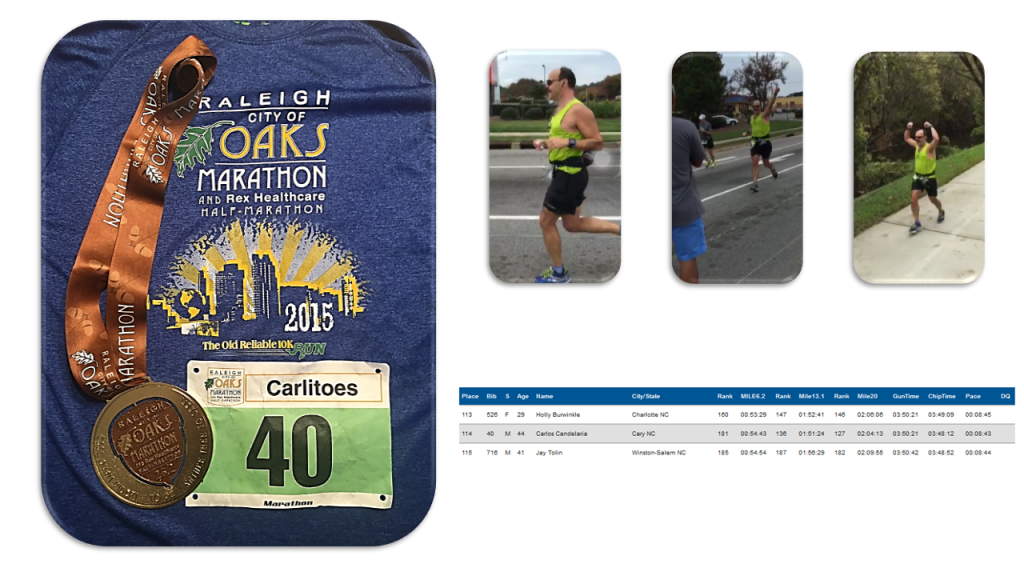