Today is the start, at least for me since there has been 3 prior events, of the Race 13.1 Series half marathons. This is my first event since the RnR Marathon last month. Since then I have done just some long easy runs few times a week and no speed work. Some of the shorter runs were at somewhat challenging trail. Well, to me, the trails felt challenging. I have been trying more single track trail runs lately with those runs at Umstead State park trails with my friends from the Raleigh Trail Runners club on Sundays and John F. and Mike from work on Thursday mornings. I was hoping that those runs were keeping my base high enough for the next few events, since they are going to be fun events and to take advantage of the Race 13.1 season pass.

This morning, the usual breakfast at 3:30 AM and the banana for about an hour prior to start. The sugars were well above the high side of the running range so I did an small adjustment. Traveled about an hour with my friend Roland. He is back in the running wagon and ready to tackle this event. We got to the event area with plenty of time to pick the bib and wait for the event to start. 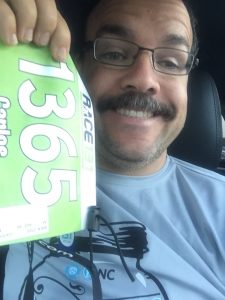 Walked a little bit, quick visit to the porta potty, but it was freaking cold to just wait at the corral area, so we went back to the car to wait for a while. Great temperature for running but not for standing around.

I check sugars once again an although they were just a bit high at this time, it was trending down fast. Since I did not want it a low during the event I decided to do a temp basal about 10% of the normal for 1 1/2 hours. With 20 minutes to the start of the half, I went ahead with my 1 mile warm up.

Once again the 13.1 Race events were very well organized. Plenty of porta potty, even with over 1500 runners and then some more with their families and friends. Just before I head out to the starting corral I checked once again my sugar and they were on the upper side but holding steady at this time great for start a run. My CGMS was providing accurate data today so another great sign.

I lined up near the 2:00 hour pacer. With the plan to work my way up to the 1:45 pacer if possible. Since this was the 1st official half for the 2016 season I want it to be a strong one. The start was good, there were plenty of room to run even with the large amount of runners. The route took you around the event area so all the spectators were concentrated along the initial half mile of the event.

First couple miles were ups and down. After those two miles it was supposed to be downhill for about 4 miles but did not felt that way. Then some hills and a single turnaround. So the downhill portion now becomes uphill for the last segments of the event. Early on I was following couple runners that were holding a good fast pace. At the water station I decided to take Gatorade instead of water to see if I could have a solid run without taking a gel. Since during training I have gone 8 and 10 milers without having to fuel and just taking water.

But getting to the 40 minute mark, around mile 5, I checked my CGMS and it was trending low. I was clocking good pace splits and my legs were feeling great. I decided to take a non-caffeinated gel. After the gel I felt even better and pressed on a bit. Around mile 6 the small hills segment came up. It was not as bad as I thought it was going to be. Getting close to the mile maker 7, I saw my friend Arvind coming down fast, we high five and each of us continued our way. Not far ahead was the turnaround and I was feeling good. Sugar holding but on the lower side of the range, I kept grabbing Gatorade at the water stations. I was not feeling a low, but the CGMS gave me the low alarm. 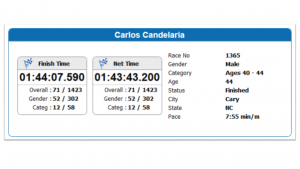 I kept pushing the pace a bit when not far ahead, I came across my daughter’s swimming coach Cole. He was running strong as well, another high five and a shout out. Similar to the earlier encounter with Arvind, that provided me with additional energy to keep pushing the pace. At mile 10 I got my watch alarm for fueling again, I looked once again my CGMS after another low alarm and sugars were once again trending down. I decided to take my last gel with caffeine. After that, the next 2 miles went by fast. With about one mile to go and a slightly uphill section, I realized that I could PR in this event. I concentrated on my breathing and once again I pressed on the pace during the hill portion followed by the flat section, for a solid finish and a PR of 1:43:43. My friend from Raleigh Trail Runners club (RTR) Arvind finished 3rd on our age group. Roland did fantastic in his event as well. My daughter’s coach had a good day also, improving his finish time by more than 10 minutes. It was a great day and great event.

I decided this time to post a bit about how my sugars behaved during the event. I did my best to overlap the graphs from my CGMS and the readings I input on my pump. Keep in mind that I took additional glucose meter readings that are not in the chart that were just prior to the event in which the numbers were within the running range. I used both information to make decisions around how to better manage the sugars during races and events. Below is the 1st set of two graph, where you can see when I decided to do a temporary basal for 1 1/2 hours around 6:15AM when I took a reading and was around 165 and trending down. In addition to that you can also see that even with that temporary basal, my sugars continued to drop consistently during the event. 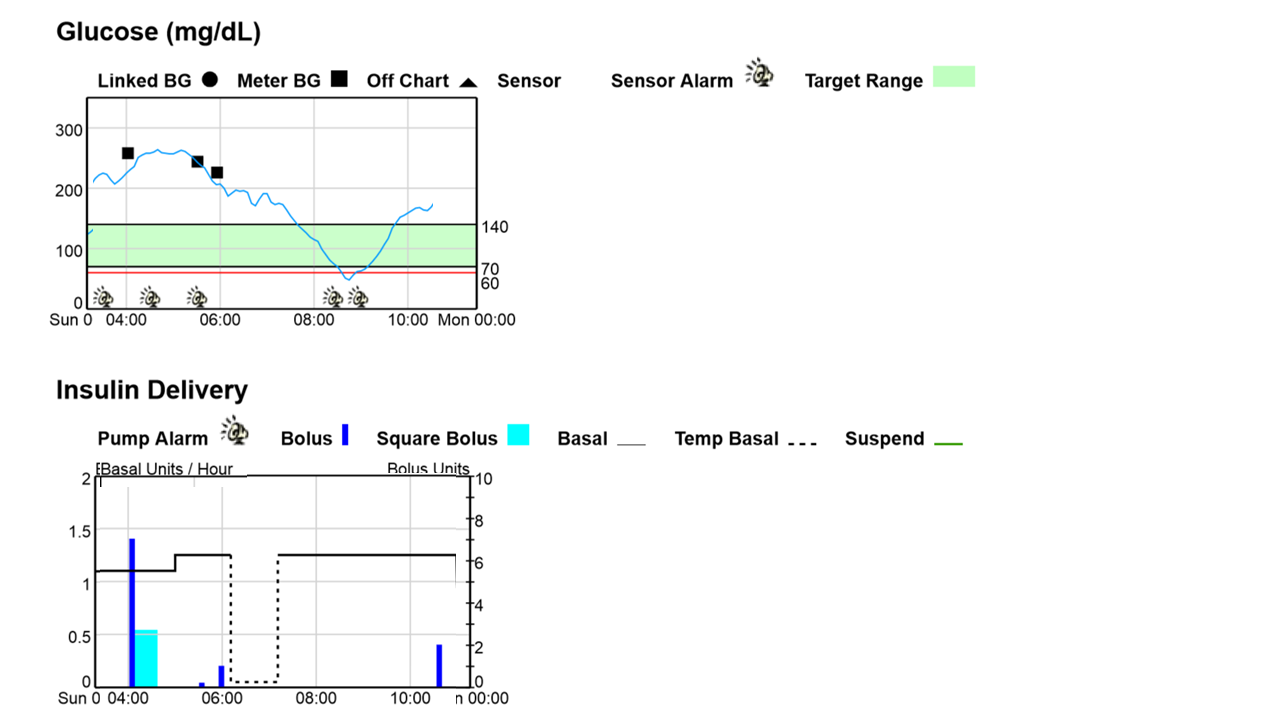 Then in the next set of graphs I zoomed the CGMS graph for the duration of the event and how it compares to the pace, elevation as well as my cadence charts from my GPS watch. One thing I notice was that my cadence dropped a bit during the time of getting close to low sugars. Even though I felt ok, I did not notice the lower cadence even as I was pressing the pace at the end. Also I marked in the graphs the gel intake which was about 25 carbs at that point I did not made any bolus adjustment for the carb intake. The sugars continued to slowly drop. 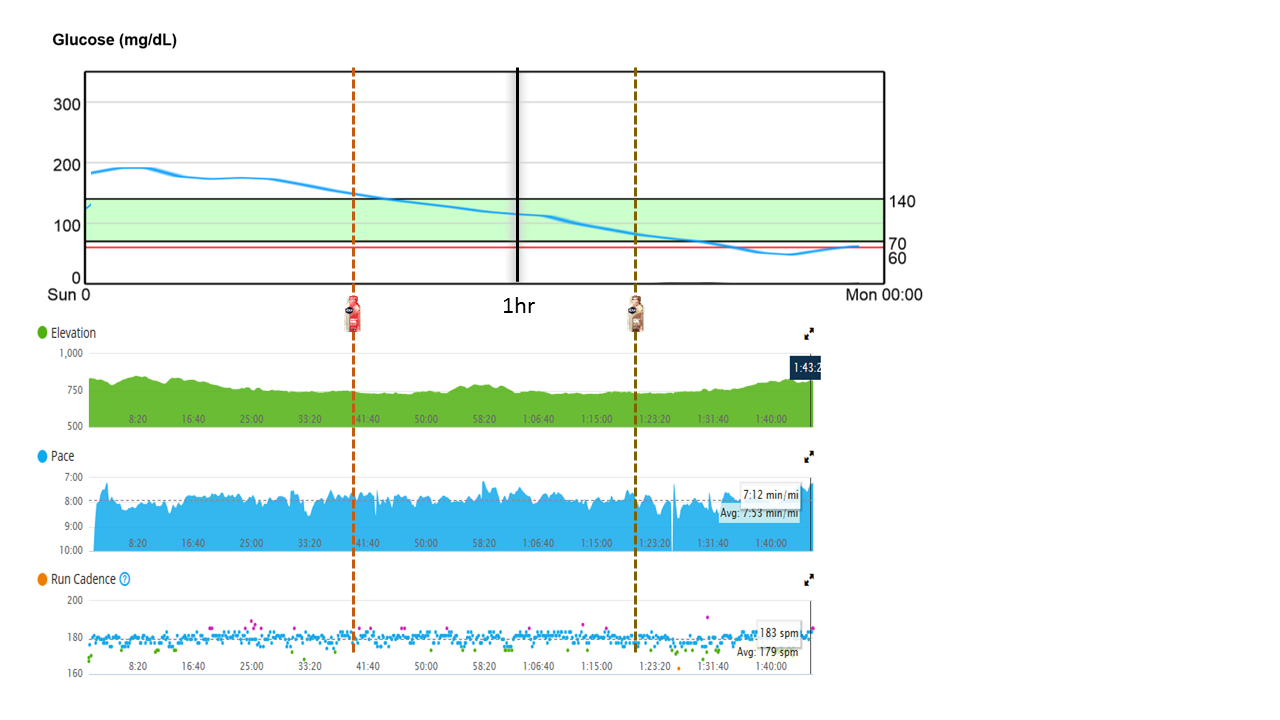 Course: Great ample road right of the start. Some hills during first 2  miles. Followed by long basically downhill of 4 miles. Some more hills and then back to the start. Water station setup and distances were really good. Pretty well staffed too.

T1D: Sugars with in running range at start. CGMS warned of low sugars around mile 9.

Fueling: Pre-Race: 1 serving Hot Cereal and Latte. One Banana one hour before start of race.

Race: Gatorade at the water station. One gel (non-Caffeinated) around 40 minutes into the event another one (Caffeinated) at 80 minutes. 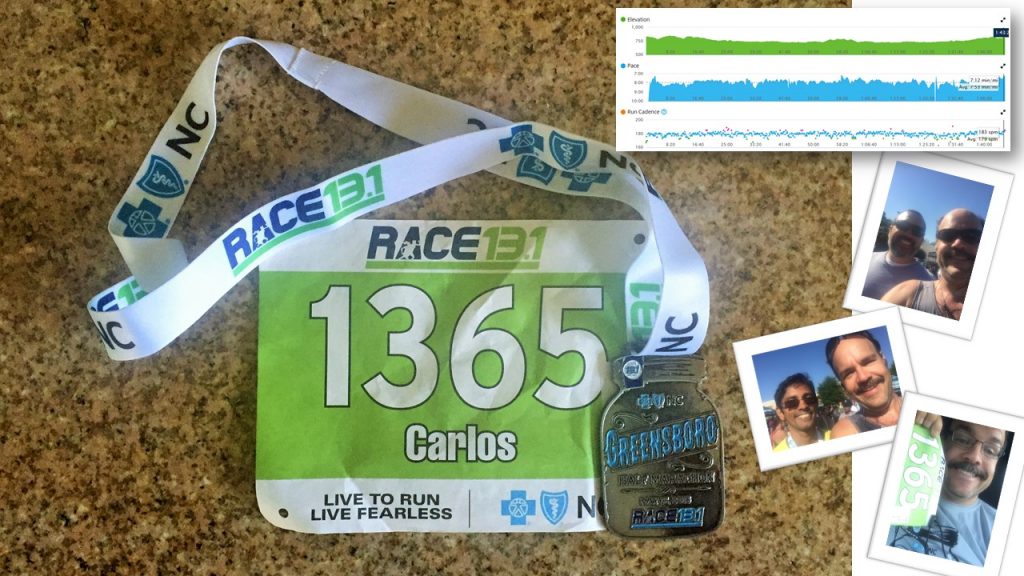