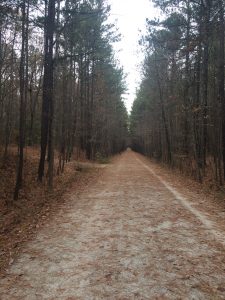 I’m running the other day at one of my favorite calming trails, the American Tobacco Trail, where once in a while I’m used to see the usual squirrels, bugs, spider webs and the occasional deer and even once, I ran early enough to see a group slowly riding horses along the trail. But that morning, it was very peaceful with not many runners at the trail. Sunny and cool with a slightly crisp breeze that I felt as I jog my way around mile 5 of a 16 miler training long run. 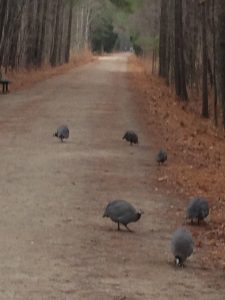 Suddenly in the distance of the wide trail, I could see a set of blobs of gray. The blob moved slightly, so now I know it was alive and a possible animal. But my vision is not perfect and since I was wearing my prescription sunglasses I cannot make of what I am seeing since it is an old prescription on the set I was wearing that day. As I got close I thought perhaps it was a possum or some animal like that. But there were many of them, so I was definitely doubting that. To my surprise when I got closer and closer it was a flock of Guinea Fowl. Just there, in the middle of the trail, doing their own thing or whatever they do. They notice my presence and did not budge or moved. You see, I have only been in NC for about 6 years and this was the first time for me seeing Guinea Fowl here in the “wild”. 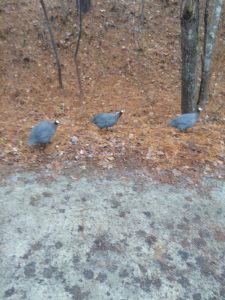 It quickly brought tons of good memories from my childhood and simple times when we used to raised chickens, ducks and other farm animals. I smiled as I got my cell phone out to snap a few pictures of this moment. I doubt the flock was wild, perhaps they escape out from their coop. In, perhaps, an attempt to go for a run. I continued with my run and on the way back as I was getting close to the same area I started to look for the flock. But the flock was long gone.

even the same trails you run every week,

will take you away to other familiar places.