The 13.1 Series event in Richmond, I ran this event last year. After finishing the most crazy and horrible course that basically took runners for an exciting and comprehensive view of the Richmond Speedway parking lot area. I normally do not provide much feedback, but I remember last year I wrote, as many other runners did, a lengthy feedback and suggestions. I remember thinking that I was not going to do that event again, not on my list of repeats. This year my daughter had a swimming meet near the Richmond area and it was the same weekend of the 13.1 half. Since I had the season pass and I was going to be in the area anyway I decided to give it a try, just for the bling. I signed up and did not think much of it and was not expecting much either. 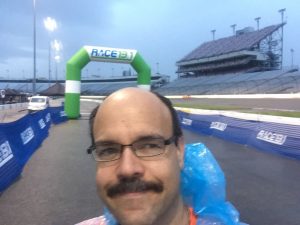 Once I got the email with the participant information, I check the link and took a look at the route. To my surprise they changed the entire course. No running in loose gravel, minimal scenic parking area. Instead mostly going on the street and including some neighborhood streets in very nice neighborhood area with actually running around the perimeter of a cemetery. To top it all instead of the start and finish at the parking lot now it will start an actual track race track which was pretty neat. With the chance to do almost 2 1/2 loops or so in the actual racing track. I was nice to see that the event organizers listened to the feedback, made changes and improved the event of last year’s experience.

As a family we traveled the day before the race, on Friday, for the swimming meet. The swimming meet sessions were in the afternoon. So it was perfect for completing the half in time to attend my daughter’s events at the pool. We had a good dinner, got all my running stuff out of the travel bag and ready. (Watch, running gear, snacks, running clothes, poncho and stuff for after the race.)

For this event the goals were simple I was going try to improve from last week last week’s half. With the new route. It look better than the route from the last week half. It was that a better course in terms of elevation change. Second target that I had was, again, to try to run the whole event with only taking what it was being offered at the event. I was going to carry some gels, like before, just in case.  The only detail about the event that it was still unknown was the weather. In morning I checked the forecast and it was going to be miserable. Temperature was going to be good, but the rain was going to be persistent rain for hours. I love running in the rain and had few raining training runs in the past, so not much worry about that, but whether I was going to be able to perform with the pace to PR.

In the morning at the hotel, the usual oatmeal with latte.  Drove to the venue, raining all the way. Got there and realized that I left my Zip-lock bag for my pump back at the Hotel. So, since my pump was water resistance not water-proof I was going to have to run with the rain poncho. The original plan was to start with the poncho and toss it at the 1st water station. Now that will not be the case if the rain continues. I also decided not to do my normal 1 mile warm up. It was raining a lot and I want to stay dry as much as possible for the event.

Event started on time, well organized as many of the 13.1 series previous event. Starting and running in the race track was an awesome treat. During the first lap, I recognized one of runners by the two tattoos in her back. As I was passing each other we recognized each other from the City of Oak Marathon and previous 13.1 races. We say hi and wish each other a good run. The route was awesome, some familiar areas, some new and all of them wet. Jumping over puddles of water. Skipping over running water and trying to keep a decent pace. After 4 miles into the event I realized that I was not going to PR. It was ok, the race turned into a fun race. Feeling the drops of water, enjoying the view, the nice neighborhoods and the Cemetery. A little bit spooky, but it was very nice. Not too much challenge with the various small hills. Definitely much better than last year. I finished the event with another loop and a half around the track. 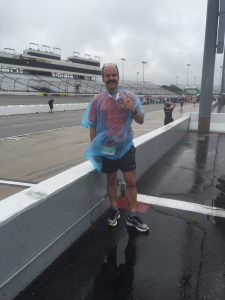 Finished with a 1 mile cool down, got some food at the finish line venue. The finish line venue was well stick with fruit, snacks, pizza and water. Once again great venue. Although no PR this time, I was able to complete the event, with only what was offered at the water stations. Second goal completed. Not that I would not carry, emergency gels to tackle low sugars, but it is possible for me to complete it with out them.

Will I do this event again? I think with the new route I will definitely consider it. Good jog 13.1 Race series for listening to the runner’s feedback and making adjustments to create a successful event. Now if you could put a super 13.1 mile long tent to cover the route and keep the runners dry in case of rain.

Course: Fantastic start/finish area at the Richmond International Race Track. Great ample road right of the start. Some hills nothing too challenging. Even with the constant rain the course was well managed and marked. Water station setup and distances were really good. Pretty well staffed too.

Race: Gatorade at the water station. 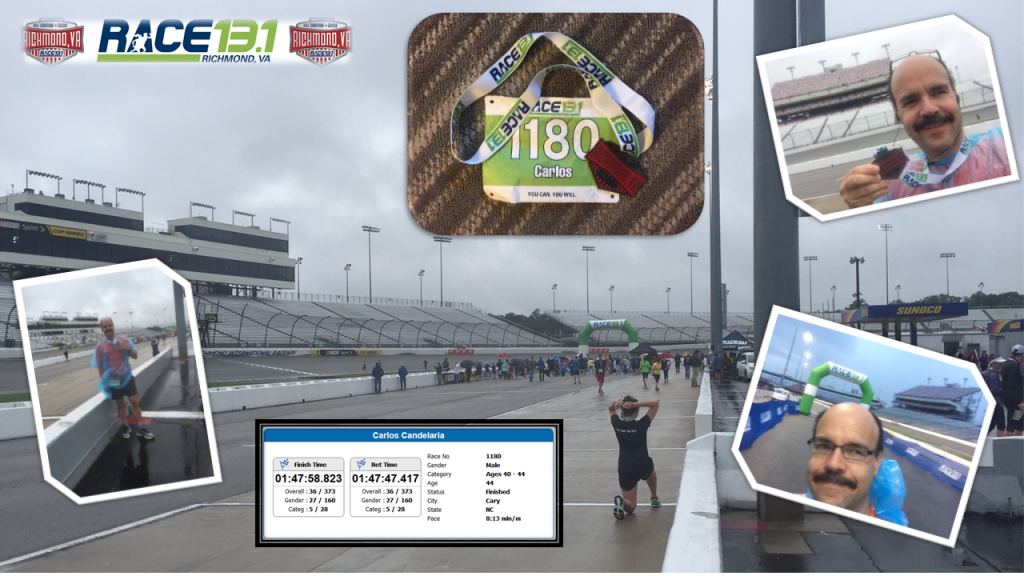