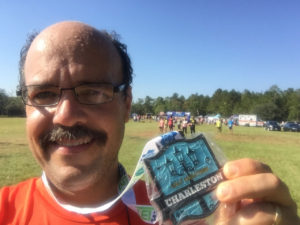 As part of the Race 13.1 series, I was able to cross another state of the 50 state challenge list for this year with an event in South Carolina. This was the second year for the Charleston Race 13.1 event, but this year due to the damage done to the original course by the Hurricane Mathew  the course was change to just be a basically 4 miles and some change loop, done three times and the extra to complete the 13.1 to the finish line. I was not aware of last year route, so to me it was like a new event anyway.

Roland was running this event as well, so we decided to travel together the day before, pick the bid up and be closer to the starting area so we did not have drive way early in the morning. He decided to switch his event distance from a 10k to a Half. Since the medal was a really cool medal, he had been putting a few extra training miles and at last week’s 10k he did fantastic, he did not want it to miss the opportunity to cross a state out of his list.

That Friday, I had to rush out of work and quickly grabbed my stuff that was ready waiting for me. But since I was coming from work my meter was in my work backpack, in the rush of trying to head out as soon as possible I forgot my glucose meter. Thankfully I had my CGMS (Continuous Glucose Monitoring System), with a fresh sensor, so I was going to have to rely more on the CGMS readings and how I felt to finish the event, until I got back home to do some accurate sensor calibrations. We got to Charleston just in time to grab the packet information and head out to eat dinner.

In the morning the usual morning prep-fuel, drove to the starting area. Sugars from the CGMS were within the running range and I was feeling good. I did a one mile easy warm up, something that has worked for me in the past for events in this distance. While doing the warm up, I notice that the route was very uneven “trail” and with different types of terrain (dirt, grassy, sand, soft and medium soft). I needed to be careful. There were many more participants (over 450 runners) in this event compare to last week’s race in Fayetteville. (Around 325 runners) Which it was good, I like medium to large events and more runners around me that force me to push the pace. I saw some familiar faces from previous Race 13.1 events and after few announcements of we went.

In 1st loop, I took it easy, trying to figure out the terrain was a little bit tricky. Since it was uneven and there were lots of curve/turns areas that went around the lake. Trying to manage to run the tangents but still finding areas to run where the terrain was firm enough, instead of soft dirt that made the form and run inefficient.  The terrain was changing constantly, from grassy firm to soft dirt, to sand like, to compacted and loose gravel. Making it very interesting to keep quick feet going. I started to pass runners, slowly but steady. I was feeling good, but did not want to press to much the pace. I was trying to be careful not to twist an ankle since I have the City of Oaks Marathon next Sunday. I was expecting only one water station at the mid point and another one at start, but to my surprise there were three, well staffed stations with Gatorade and water, it was perfect. Sugars remained steady during the loop. 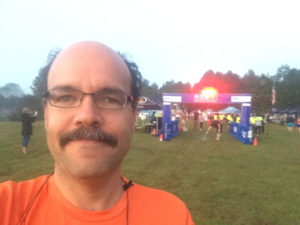 The 2nd loop I sped up a bit. There were a few runners that I was targeting and passing, but by the mid point of the loop, sun was out and it started to pound, so it was warming up a bit faster that I want it. Still very solid pace and my sugar were holding steady. Pass mile 7, I decided to take my energy gel and adjust with some bolus to keep the sugars in check. I was feeling good.

At the last loop, by this time, I do not know if it was the repetitiveness of the loops (same scenery, still beautiful), the warming up of the sun or that I figure out that I was not going to PR in this event, I slowed down a bit. I still was, slowly, passing other runners, but this time it was not as solid as before. The last few mile markers went by fast and soon after that the finish line was closing in. I guess I forgot the white markings in the grass at the start of the event, but I almost tumble when crossing the finish line due to some indentation in the grassy area. I can’t wait to see the photos of the end of the event. 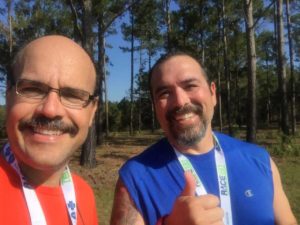 Roland was not too far behind, finishing a solid event. After that, I did a one mile warm down, something I skipped during the last event and payed the stiffness consequences that afternoon and the next day. The food and the finish line atmosphere was excellent. There was fruit juice this time at the end for the runners, from Natalie’s Fruit Juice. It was great. Between the Pizza, orange, banana and fruit juice it was all good. I spend some time looking at the Halloween costumes. Some were great, zombies, Wonder Woman, Marilyn Monroe, Shoes, Pirates and as awesome one, white cloud with rain drops included. It was a really great event.

T1D: No meter to confirm. Sugars were within target at the start and steady during the event.

Race: Gatorade and water at the water stations. E-Gel gel around mile 7.