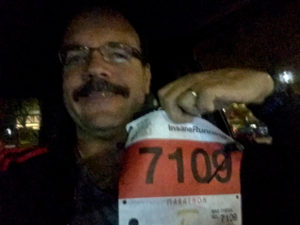 I wish I can say I followed a training program for this event but I can’t. This year since I have been focusing of two yearly challenges there has not been much formal training other than keeping the base running high and a few weeks with Yassos workouts. The main long runs were from my Ragnar event weekend and a few over 20 long run miles.

Like last year event the few nights prior to the Marathon were solid nights and well rested nights. I watched somewhat the diet but it was not stellar. The one thing I have truly focusing this time, compared to last year was, the last two weeks taper mileage. It was definitely hard not to add a mile here or a mile there, given that by the end of the scheduled taper training miles I was finishing with fresh legs. No 5k event/race prior to the event either this year. It does takes a lot of effort to minimize the amount of mileage, specially when feeling good. Although the shorter miles were at a faster pace than just a usual easy run pace. Late on Saturday I felt very ready for the event.

The Expo area was really good this year. Lots booths, goodies and information. One of the booth that caught my attention this year was the Run Raleigh physical therapy and performance lab. They showed me the three different services they offered from VO2max test to 3d Gait Analysis reports, to help runners figure out running efficiency improvements and minimize possible injuries.

For fueling during the event I got my E-Fuel mix and 3 Gels, plus an extra one for just in case. (2 E-Gel, 2 caffeinated GUs) Similar my previous marathon the plan was to drink the E-Fuel only if needed and relied on the fluid from the course. Per previous long distance events I was not carrying my meter during the event since I have my CGMS.

At 4:30 AM, woke up to get ready for the race. (Fortunately it is daylight saving day, so it was an extra hour of sleep) For breakfast, I had the usual one serving of oatmeal, a Latte and a Banana to take with me to eat about an hour to the event. Check my sugars before I leave and they were perfect 150 and steady. 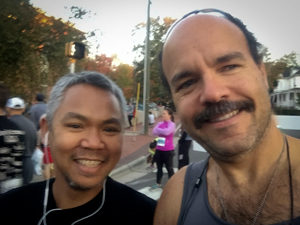 Got to the area early and as I was getting ready to leave the parking area I checked once again my sugars,there were still hovering 140s. I was feeling really good for this event. A quick stop at the porta potty some walk around the area to relax. Talked to a few runners, including, Arwind from RTR, my friend Choung and a young runner making her racing debut with the Marathon.  I lined up just half way between the 4:00 pacer and 3:30  pacer groups. Since my original target was 3:45. I check my sensor and it was 160 and stable so no adjustment needed at this time. A few announcements as usual and off we went down Hillsborough Street.

Miles 1-6: Very uneventful miles, I found the zone quite quickly. I was going just a little bit (10 seconds) ahead of pace, so every time I was seeing my pace I tried to slow down a bit. There is a combination of 10k, Half, Full and relays, so it is a little bit confusing to determine who to target, follow for pace. I came across the young runner and I helper by holding her bib and phone while she was trying to deal with an over dressed issue, it started to get little bit warm around the sunny portions.

Miles 7-12: So far so good, but the sensor started to predict a low. I was feeling great so when I took my energy gel I did not adjusted for carbs intake. I also reduced my basal for the next hour and half a bit, to help the sugars to go up or stabilize. This portion of the event includes a lot of small up & down hills throughout a neighborhood area. Still holding a good decent pace and on target.

Miles 12-18: This portion of the event is mostly downhill or flat. Small sections with rolling uphill, but I have always perform pretty well during this area. Today was not difference, but the sensor continues to warned me about a low. Down to the 50s and 40s, not feeling it, I decided to still not adjust for the energy drink I was drinking at the water stations and for my second gel.

Miles 19-23: At the turn around I was not feeling well. It was not lack of energy. It was something else, so I walked for a bit. I saw the 4:00 pacer pass by, I was well ahead and still had a chance to meet my goal. I tried to figure out what was going on. Was it the heat? It was getting warm but it was not bad and there was plenty of shady portions in this segment. My CGMS was telling me that the sugars started to go up a bit but still just about 80s. I walked a bit more and then I started to run again when I thought I was feeling better. I walked the next couple water stations, since I was not feeling it just yet. The medical tent station was around mile 22, I stopped and asked to see if they could check my sugars. I preferred to add another point of information, even if it meant couple minutes. I needed to figure out what was going on. Their meter read 416, while my CGMS was telling me 56. No wonder I was feeling like rancid coconut. (It is a saying back where grew up). I did a quick bolus adjustment, probably 50% of the recommended dose. I did not want it to have another incident like the one at Rock and Roll few years back. I continued but this time at a very slower pace. No rush at this time, there was no way I was going to come close to my target.

Miles 24-26.2: By this time any efforts to regain the running zone was lost. Out of pace, feeling just a touch better, my stomach started to give me problems too. I was so glad to encounter one of the RTR Club member, Candi. She found me about mile 25, on one of my walking breaks. She gave me a shout out, told me to start jogging with her and I did. I started to talk to her about her run and other topics just to get my mind out the spiral I was in. It worked, she helped me get all the way until the last .2 miles which I increased my pace to try to finish strong. 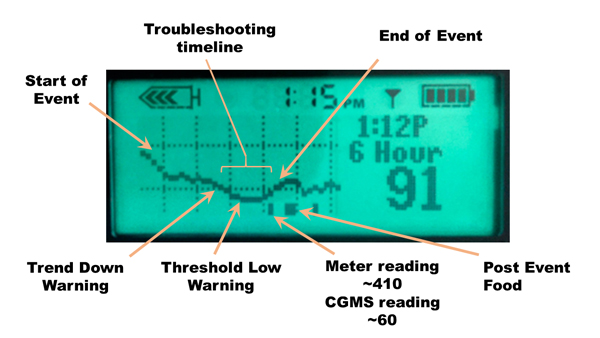 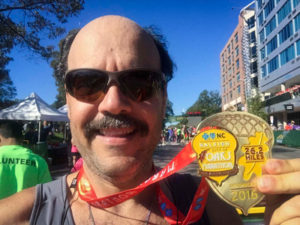 Although I was unable to PR and unable to beat last year’s time in this event, I finished under four hours. Not a solid event, but a decent one. Learned lots and still had some fun specially during the 1st half of the event. The post event was great, kudos to the organizers. There was a food truck rodeo, free good coffee, lots of good goodies (Like delicious KIND snack nut bars) and plenty to eat (Donuts, pizza, oranges, bananas, snacks, bread, water and BEER) The music was excellent too. Met with few other runners, Brian from RTR and another runner that we met before at the Tobacco Trail training runs. I really enjoyed the post event it this time. Now to relax, take a day off and get ready for the 5k this Thursday.

Course: Great ample road right of the start. Both Half and Full start at the time, expect some weaving between runners for the first couple miles. Excellent water station setup and distances. Pretty well staffed too.

Venue: Start/finish line with bag check. At finish, the post event was GREAT! Great music and there was lots good food, plenty to drink, even a Food Truck Rodeo area and beer.

Expo: Expo was much better this year, it had more booths and a larger area. Good goodies and great info on products and services.

T1D: Sugars with in running range at start. CGMS provided wrong measurement during the events. Adjustments done after stopping at medical station.

Race: Water and energy drink at the water station. Carried E-Fuel, drank most after mile 14. 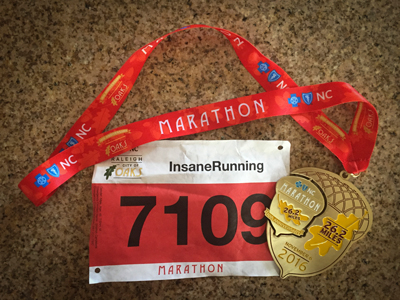