Once again here we are running the Cisco 5k. This is more a tradition than anything else. Since I have run this event many times before, I know the route pretty well. I now know more runners and know what to expect during the run. But this time, different from previous years, the event landed after the City of Oak Marathon. So I was a little bit sore for the past few days. I ran a few miles on Tuesday just to get the legs moving, there were slow miles but I started to feel a bit better. But last night I took the opportunity to complete this year week’s 13 challenge given that I was able to have some additional afternoon time and this weekend it was going to be very difficult to find the extra time to complete. I did not want to risk missing the challenge since I am very close to complete it. 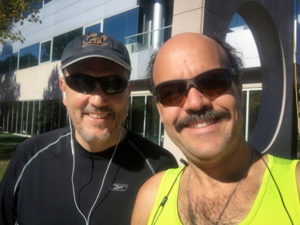 I thought about taking it easy, but I knew that was not going to be possible, once I saw the runners go the competitive subconscious kicked in. Since this event has a late start of 11:00AM, much later than the usual events I participate in, I had to do some tweaking around the pre-race preparation. I basically followed exactly what I did last year, in the morning I did the usual breakfast for events, serving of hot cereal, latte and a banana about an hour later with the proper bolus (insulin) adjustment. With about 1 1/2 hours to go for the event, I ate a Cliff Oatmeal and Walnuts bar with 46g carbs. Sugars were holding good when I checked, 146. 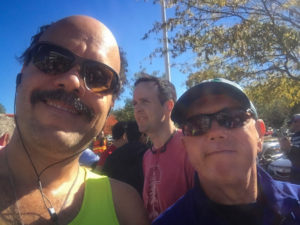 I did the bolus adjustment for the carbs and head out to get ready. Got to the event area with plenty time to relax, talk to few friends and do a 1 mile warm up run with some speed play, some butt kicks and high knees and minimal stretching. 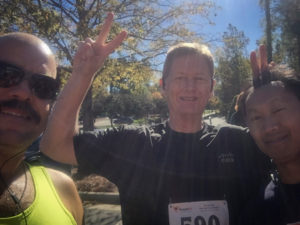 I met with more runners, Luis, my brother in law (Running his second 5k looking to improve his time), Marc, Roland, Hoan, Todd, JJ and others near the start line. This year everyone had more experience and more miles under their belts. It was going to be a good day for running. The rest of the runners were exited as well wearing their school colors. That was the theme for this year’s event. 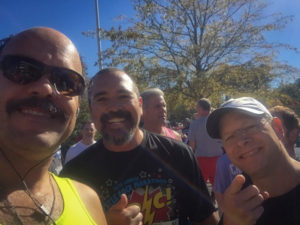 The temperature was around 57º, much lower than last year and the humidity was also much better hovering around 36%. Just prior to the start of the event I drank some water and lined up close to the front. The race went by fast, in no time I was already mile 1. I was sore but holding a steady pace. On the way in I grabbed some water at the water station, but just a bit. 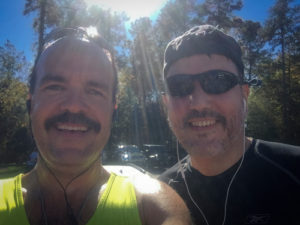 Going into Mile 2, which for me takes more energy due to some small hills, went by fast as well, I was following a few runners ahead of me and trying to pass them during the up hill sections of the route. It worked, slowly I was passing a few runners here and there. Going pass mile 2, I grabbed more water, just a sip but I felt the sore legs again. I know I did not mean to, but I ease a bit the pace, although still targeting couple more runners ahead of me before arriving to the final stretch were in the corner there was another friend from work John that volunteered this year. That final shout out gave me extra energy to close and finish the event strong. At the end the Garmin was showing I had a PR (I guess based on what I have run in the past with the watch which it was an earlier performance back in April of this year at the Rock and Roll 5k). But once I loaded, it was actually my second best, compare to my PR which I achieved last year in the same event. Missed it by about 17 seconds. Regardless I was extremely happy with today’s performance, much much different from Sunday’s event. 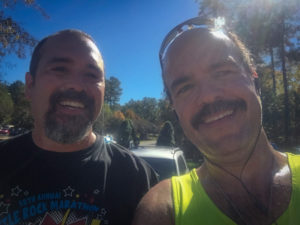 After a one mile warm down, I hanged around to talk to a few friends and runners that were at the finish area. Luis, Roland, JJ, Chris and other friends did fantastic. Most of them conquering their personal goals. It was a great day to run.

T1D: Sugars within running range at start. Remained steady and trended all the way.

Post: Latte, couple mandarins and a ham and cheese sandwich