I believe this is my fourth Skinny Turkey Half Marathon. As many of my other events I have kept adding these fun events to my every year favorites list.  The Sunday before the event, I met with the RTR (Raleigh Trail Runners club) group at Umstead Park for a planned 10 miler easy run but instead we ended up doing 14. Which is ok given that I had few days to recover. But then, a friend from work invited me to go run again at Umstead, for a more challenging trail run. Since I like that trail a lot, I decided that instead to do 3 miler per the original schedule to do 6 mile with little bit more challenging hills. I do not think this is the way to taper for an event. To be honest, although I was a little bit tired this morning for the event, I do not think it affected the performance as much as the sugars did in today’s event.

For dinner the night before, some small salad, vegetable juice and some popcorn for late snack.  Sugars were behaving pretty well, since that is the normal routine. I have eaten similar menu for nights before training runs, but this is first time trying this for the night before an event. In the morning the usual latte with hot cereal and a banana to eat just 45 to 60 minutes before the event. Sugars were good hovering around 145. Drove to the event location at a High School in Wake Forrest with plenty of time. I like this event location, it has plenty of bathrooms and areas to stretch, sit down and relax. There I met with few a friends from RTR (Raleigh Trail Runners club) that were getting ready for the event.

I warmed up with a mile slow jog after a few announcements, the National Anthem and off we went, around 350 runners. I started as usual a little bit behind the pack. Since is a very nice wide road, I can easily start moving forward until I find the the right pacing group. The course similar to previous years was very hilly, so there was a constant change of pace. The first 2-3 miles went ok. I was hitting the original target pace, perhaps a few seconds ahead but feeling well and in control. I caught up with Stéphane from RTR who was pacing the 1:50 runners. I hang with him for for about a minute or so and continued slightly inching ahead. I skipped the 1st couple water stations, since the temperature was great for running and I was not feeling hot. At the end of mile 3, the CGMS alarm went off, with a low sugars of ~60. I am not feeling it, but I did adjusted the basal rate. I started to wonder if the same thing from City of Oaks Marathon was happening again. I continue to slowly passing a few runners.

Miles 5-6 I was not necessary feeling 100%, the pump still warning me about the sugars. The legs were a bit sore, specially during the downhills, but still I was going at a good pace. I thought it was just mental. I was just taking some water at the water stations. Now at miles 6-8, I am not feeling that good, stomach started to gave me some discomfort. I took some sip of water and the next opportunity. Close to the turnaround I saw Arvind and Dieter just a few seconds later coming down the hill fast. They were doing great, racing at a great solid pace, it was great to see them, it gave me a much needed second wind, although it did not last long. As I continue past the turnaround but I started to slow down, even during the downhills I was not keeping with the target pace. I was off by about 15 second pace for the next couple miles. At mile 10, knowing that PR was not going to be possible for today, I walked a bit at the water station, grabbed water and did a small 1/2 unit bolus adjustment. I needed to try something, given that I had the extra gel with me just in case. The CGMS was still showing lower than 40, I knew at this time it was not possible. 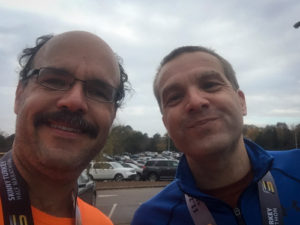 Stéphane caught up soon after I started to walk a bit. He provided the necessary words of encouragement, for me to start running and pick up the pace. He asked for me to hang with him and the 1:50 pacer group and I did at least for the next couple miles. 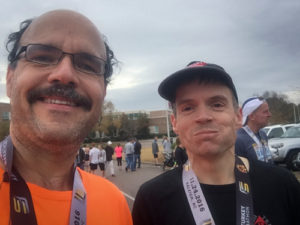 We chatted and cheered for the upcoming runners, then I slowed down a bit, grabbed water at the last water station and then tried to close the gap between me and the 1:50 pacer group. Not a best performance but a 1:50:08 finish. I will still take it.

I hang around at the finish line area, there was plenty food, drink  and snacks to eat. With the finisher’s medal they were handling out an engraved wine bottle opener. Nice! As always in this event, the traditional picture with Santa. 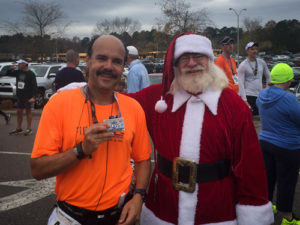 I checked my sugar levels with the meter when I returned to my vehicle and this time the reading was 325, when the CGMS was still shouting a reading of low sugars. I did a normal bolus adjustment, waited a bit and went out for a 1 mile cool down jog. It was a great event, Arvind finished 1st overall in the Masters division with Dieter taking the second spot just a few seconds behind.

Course: Great ample road right of the start but very hilly. Around 350 runners. With the ample road there is no problem starting and finding a comfortable pace.

Weather: Overcast skies with some drizzle, 48º with 93% humidity.

T1D: Sugars with in running range at the start but similar to the City of Oaks the CGMS was showing dropping at start and during event. Reduced the Basal and no bolus for the fuel. Later I had to do a small bolus adjustment during the event. At the end of event sugars were 325 per meter compare to below 40 from GCMS.

Race: Skipped 1st and second to last stations. Gatorade at third and fourth station. One gel.