Today with this event, I completed another Triple Crown Holiday Challenge. Also this event was the last event for the Race 13.1 Series and to be able to complete the 7th event for the 7th Challenge medal. This week I started my marathon training plan for the 2017 Raleigh Rock and Roll, so this event, also is out of the norm for the training plan which it had me with only 8 scheduled miles for today. I addition other than some good fast runs at Umstead State park with my friends from the Raleigh Trail Runners club prior to this week, that was the preparation for this event. Wait, did I mentioned that this was my 39th half? 🙂 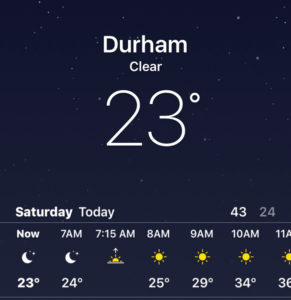 The morning routine as usual, breakfast and the banana about an hour prior to start. The sugars were on the high side, over 230 and I had to replace my pump the infusion set. Got to the event area with plenty of time to grab my bib, event shirt. Walked a little bit, quick visit to the porta potty. I went ahead with my 1 mile warm up that have served me well for these events. Checked once again my sugars and now it was better, still a bit on the high side but within the running range. Like last year’s event, the venue was very well organized. Plenty of porta pottys, but the weather was humid and very cold, down in the twenties. Last year there were over 1500 runners for the 5k, 10k and Half today there were not that many around 800 runners in the half.

I stopped by the front of the corral where the speedy runners have their start line to meet with Arvind and wish him luck. I lined up near the 1:45 hour pacer, after few announcements and off we went. The initial start was good, lots of room to run and establish a good pace. The 1st part of the event goes around the runners staging area, so other runners for the 5k, 10k and their families were there to cheer up the Half Marathoners.

Miles 1-3: I was feeling great, held a good pace, just a little bit faster than target (About 10 seconds). I grabbed water at the station and to my surprise it had some ice. Did I mentioned it was cold!!! Even with the icy water I was able to drink some. The water stations were well manned with excellent volunteers. This portion of the route is near Duke East Campus with very nice building, houses and shaded roads. My feet and hands were very cold, but the rest of the body was warming up.

Miles 4-6: I slowed down a bit to remove my running jacket off, I started to sweat too much, even with being in the twenties. After that I started to feel much better, hands were cold a bit, but the leg were feeling good. The CGMS was fluctuating a lot during the first few miles. So I knew the sugars were high and adjusted with some basal insulin.  Still running strong but slightly slower than the first miles but still with in target. Some more water at the stations, but it was so funny to get even more ice. At one of the stations I had to break the top layer of ice to get to the liquid portion.

Miles 7-9: I was still on target for a PR today at mile 7, but started to feel the legs. More ups and downs, not too challenging but a constant change of pace. The last miles of this section I was off target by much more than I want it.

Miles 10-Finish: I started to slow down a bit more. I did not take my gel at the 40 min mark or the one after that. But I switched to Gatorade at the stations and once again with more nice cold ice. It was funny, one of the Gatorade cups felt a bit like an ICEE/Slushee. The closing to the last mile marker, I check the pace and there was no reason to rush it, no PR for today and that was ok. I was going to make sure to finish with better time than last year.

It was a good event to finish 2016 race season. I finished and got my completion medal and went to redeem the Holiday Halfs Challenge and the Seventh Event for the Race 13.1 series medals at the runners area. Total of 3 additions to the bling collection, not bad, not bad at all.

Venue: At finish, excellent food, plenty to drink and beer.

T1D: Sugars a bit high and remained there during the event. Initial problems with CGMS was not providing accurate reading but after mile 4 it started to be ok.

Fueling: Pre-Race: 1 serving Cream of Wheat and Latte. One Banana one hour before start of race

Race: Water at the 1st three water stations after that Gatorade. No Gel. 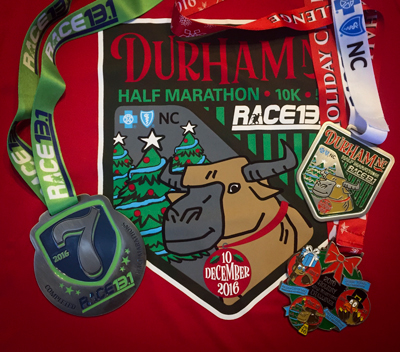