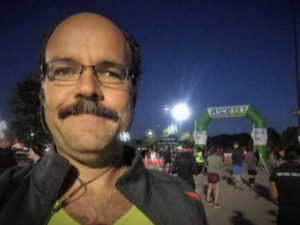 Last year I ran this event as part taking as much advantage of the Race 13.1 running series season pass. Every time I run an event in the series it gets cheaper and cheaper. Also like last year I was using this event as part of my training for a full marathon coming up in November. Basically same course, pretty much flat, some rolling hills and two small segments with some steep incline between mile 3 and 4. This event was about 1:30 away from home, so an easy drive drive in, but it means that I needed to wake up early in the morning. My friend Roland went to this event with me, as he was going to improve his 10k time from earlier this year from the Greensboro event.

This past week I had a hard work out of 10x Yassos followed by two 6 miler “easy” runs the following two days. Even tho I feel rested, my leg were very tight. I kept an better eye on what I was eating this past week, so sugars were behaving well. Woke up around 2:30AM, sugars were really good, around 150 and steady. The usual for breakfast, Oatmeal and a Latte and the banana for later about an hour before the start. Got all the stuff ready, picked Roland up and got to the event area early enough to relax a bit prior to the event.

Similar to what I have done in the past, with about 30min to the start, I went for a 1 mile warm up jog, with some speed segments sprinkled here and there to loosen the leg. It was cold, although the temps were hovering around 62, it felt freezing due to the wind. Legs were feeling tired and heavy, but it was time to start the event. Stepped between the 1:40 and 2:00 pacer, thinking to start ahead of a 2:00 hour pace and work my way to 1:40.

Mile 1-4 were just ok. I started with a running jacket but after a mile I took it off as soon as I felt I started to sweat a bit. I was just having trouble getting and finding the zone. I felt tightness and some pain/discomfort here and there, preventing me to get into a solid pace. The initial hills between mile 3 to 4 were not a problem. At the first turnaround friend Arwind was running strong. And later since the 5k & 10k started after the half I saw Roland making his way toward the turnaround of the 10k. He also was looking strong.

For mile 5-7 things gotten a bit better but still no zone. Temperature was great, sun was out. At the water stations I was grabbing some energy drink and some water, that was working out well. At the water station near mile 7 there was a little girl with her parent handing out the water cup. It was so great to see the volunteers, specially this young. I had a big smile, as I got close I pointed at her, so she and her parent knew I was going to grab the water, slowed a bit, lower my body to get closer to the cup and as I grabbed the cup I said “Thank you big time”. I  could hear, her exitement telling her parents that a runner grabbed the cup of water. It was a great.

I was able to find the zone after that. Miles 8-10 were great, I felt better and increasing the pace. The music helped as well. I do not know if the experience at the water station near mile 7 got me to relax and not think about running much, that enabled me to find the groove. At this time I started to pass many more runners with a solid pace. While some of them were slowing down, as I passed them I could feel in their faces a sense of “what?, how in the h#$@?” Some tried to match my pace and other tried, unsuccessfully to pass. That gave me more confidence, the only thing that I remind myself every single time I passed a runner was to not to slowdown and keep it solid. Once again coming from the second turnaround Arwind was running strong. Other familiar faces having fun during the even. There was even a runner dressed as Pikachu, face pint an all, that was so funny. 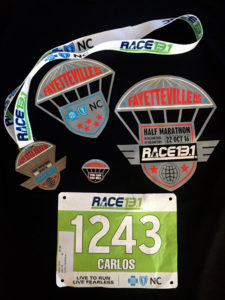 From 10 to 13.1 I increased the pace, by increasing the length of the stride a bit. I still felt strong and basically thinking that there were less than a 5k to go. Later thinking that I had only 4 laps at the track and in the end couple more laps. I was able to finish very strong with a 1:45:17 time. Not a PR, but considering that I was unable to find the zone early on in the event, it is a still solid performance for me. I am very happy with today’s event. Arwind ended up taking a second place in his age group for the half and Roland, which is coming back this year strong, got a third place in his age group for 10k. It was a good event.

Course: Good start/finish area at a Mall near Morganton Rd in Fayetteville area. Awesome ample road right of the start. Some small rolling hills along the way, with a very short hill around mile 3. The water stations setup and distances were great too.

Venue: At finish, was great, good music and food (Bananas, snacks, pizza, …) and plenty to drink.

T1D: Sugars were within target at the start. I adjusted temporary basal of only 10% dose for the duration. Still sensor then warned of a upcoming low during event, but remained stable all the way.

Race: Gatorade and water at the water station. E-Gel gel around mile 9.