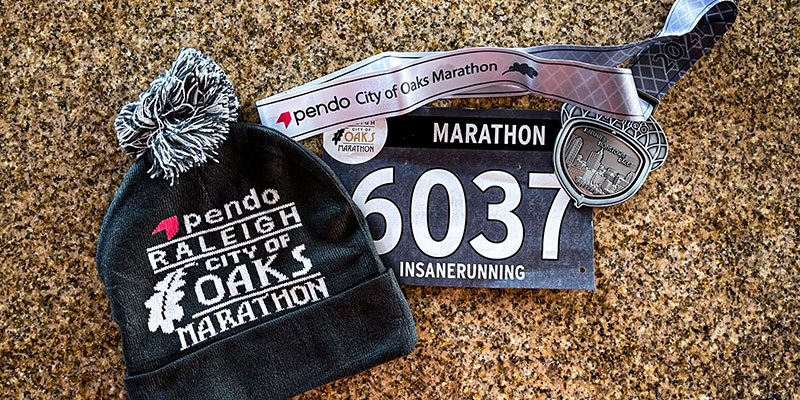 For morning routine the same as in plenty of other events, hot cereal with almond butter, coffee, water, and a banana about 35-45 minutes prior to the start of the event. Including a warm-up walk of about 3/4 miles to the start line.

I knew this was not going to be easy, my last 20+ mile training run was a few weeks ago, and in between, I have participated in a couple of half marathon events. Met with Samuel at the starting line. He was running his 1st full marathon today. Many familiar faces, some doing the half others tackling the full. We talked briefly at the start.

Samuel and I started my way from the start about 3/4 way back in the starting corral. For about the first 3 miles we slowly increased the pace to get close to the target pace for 4:30. The temperatures were fantastic and it seems everyone was running very solid. At this time there is a combination of 10k, Half, and Full runners, so we have to be very careful not to head out too fast.

Now I am feeling better and warmed up, but still have not been able to find a decent rhythm. We looked around as we were visiting the downtown area of Raleigh. Lots of runners, very nice as we start passing a few on our way to the pacers we see in front of us.

During these miles I was more of holding the pace, running with Samuel, and exchanging a few comments and ideas that I use to tackle the marathon. Sometimes feeling great, sometimes struggling just a tad making sure heart rate stayed within an acceptable range. I have to admit that we passed the 4:30 pacer and felt that both of us were going too fast for a 4:30 pace.

Trying to play the downhills more conservative at this point Samuel headed out ahead of me. That was ok, he is running very strong.

These miles were basically flat which was a relief. But I knew that I needed to play it conservative given that on the way back I was going to hit that mile or so section with hills. Sugars were still a tad on the high side so I made a quick minor bolus adjustment to make sure that they stay closer within the optimal range.

I held the pace ok, I walked a bit after the turnaround and during a couple of the water stations. My heart rate was hovering close to the red zone and I knew that I needed to take care of it before the upcoming hills.

Here come the hills, which I did play them conservative, walking a bit during the water stations and during a few of the end of the speed one. Just making sure that as soon as the heart rate was under control I started jogging my way up.

At one of the last hills, there was a runner laying down on the ground. A spectator was helping him, but I slowed down and asked if they needed help. The spectator said yes. I stopped for a few seconds, talked to the runners, and told them that I was going to run to the nearest water station so they could send someone.

I ran to the 20-mile timer area and talk to the person there and mentioned that there was a runner down about 200 meters back. She was going to call and send some help.

After the hills, it is basically smooth sailing, a few turns and rolling hills, nothing too drastic. If you were conservative at the early stages, during the flats, and after the 18-20 hills, you are good to go. I was doing ok at this time. I pushed hard at the early stages but since I corrected a bit during the flats it felt that I was somewhat in control. I walked the aid station water stations to get my heart rate doing, soon after hitting the blue zone I started jogging and increasing the pace.

Close to the end, with perhaps .3 to .4 miles I started to increase the peace and added a final push to the finish. Very happy with today’s performance.

Samuel finished well below 4:30, making his fantastic debut in the marathon with an outstanding performance. Congratulations and welcome to the marathoner’s family.

Course: Lots of runners, but there are very wise roads all the way until the half and marathon split. The course narrows at the greenways, but there are no issues as there are only marathoners running this portion. Plenty of room. Hill-wise there are rolling hills that require attention to the efforts. Mile 18 hill is challenging especially at the later part of the event. Need to take advantage of the tangents at the turns and turnaround, it could add distance to the route. In all very similar to previous years, you just tackle the segments at different stages of the race.

Venue: At the finish, was good, simple but effective. Some music, water.

Weather: Perfect weather with very few clouds all the way until the finish. A great 47º with just 85% humidity.

T1D: Sugars were a tad high for the first portion of the event. I bolus adjusted a bit and held pretty well in range after that.

Pre-Race: 1 serving Hot Cereal and Latte. A banana about 45 minutes before start.

Race: E-Fuel/Tailwind and water/Gatorade at the aid stations.

Post: Slider and Protein shake and lots of water.